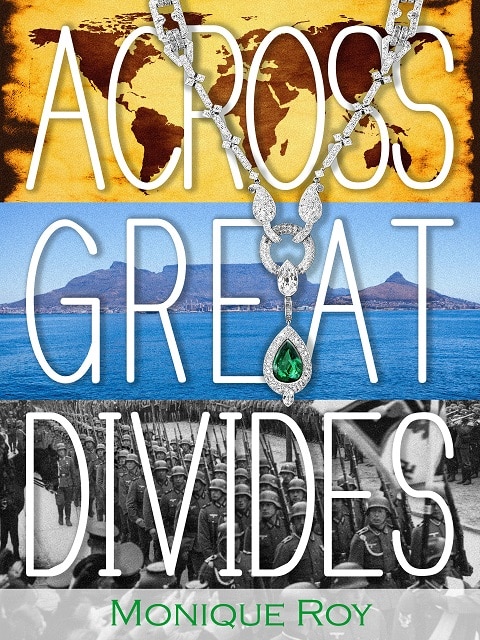 An ambitious historical fictional novel, Across Great Divides is a beautiful story worth every minute of your time. The book will captivate you from the very start all the way to the finish leaving you wanting more and disappointed when the story reaches its conclusion. In an epic tale from talented writer Monique Roy about a Jewish family who overcome prejudice and persecution in Berlin during World War II only to find prejudice once again in South Africa, lies a truly unforgettable story filled with hope, redemption and pure love.

The book will captivate you from the very start all the way to the finish leaving you wanting more and disappointed when the story reaches its conclusion.

As I’ve always had a soft spot for historical fiction with a particular interest in World War II, I was excited to read a book with a new take on the time period. As an extra bonus, Across Great Divides is also about twins, another interest of mine (probably because I am one and love to see how others interpret twins – usually with me laughing at the over the top silly clichés that usually permeate twin characters). Roy weaves a story together like a pro from one scene to the next, each one making you want to read more. The suspense felt while reading the escape scenes was intense, but also entertaining. You know a writer has succeeded when like any good Netflix series, just one more episode, or chapter in this case isn’t enough.

Right off the bat, one of the elements that drew me in is Roy’s ability as an author to create a believable setting with lifelike imagery. She describes Berlin as if she really lived there in the ‘30s. Every moment feels real and it becomes easy to imagine what it would have been like to actually live in Berlin before the War. I could place myself in these scenes and look through the eyes of the characters as if I too was living through what they were. Along with the setting, the atmosphere of changing times on the horizon is haunting but hopeful. Despite the hardships presented (and since we’re all familiar with history, we know how horrific this time was), optimism for a better future remains.

As with any good historical fiction, the characters cross paths with historical figures. In an unusual scene, we are given a description of Hitler as viewed by a supporting character who once crossed paths with him. It’s a surprising depiction, but also an intriguing one. How could a man seemingly so human, so insignificant, have been the cause of such evil? Besides this fascinating scene with Hitler, the characters throughout the book find themselves in various situations that connect to events we recognize from history. They become the window to history, giving us a glimpse of the past.

Roy also has a wonderful ability to create well rounded characters you root for. From mirror twins Eva and Inge, their parents Oskar and Helene, their brother Max, to all of the supporting characters along the way, each character is fleshed out, three-dimensional and memorable. I knew who every character was from the larger players down to the smaller ones.

I was particularly impressed with Roy’s depictions of twins. I guess as a twin myself it’s easy to be a little critical of the common one-dimensional depictions of twins. You know the twins who dress alike, talk alike (sometimes even at the same time in unison) and all around act like clones – which is super creepy. Or the complete opposite twins who have nothing in common. One is good, the other wild…While there are twins like this in real life, I always find it refreshing to see twins who don’t “always” fit into these types. I was thoroughly impressed with the depiction of Eva and Inge in the story as they are fleshed out as being two different people with similar interests but with independent spirits and personalities. I was so impressed I began to wonder where and how Roy got her information (it turns out her grandmother was a twin and helped inspire this story) on twins.

As a twin, I’ve discovered that in general many people are curious about twins. So they’ll ask you questions simply because they don’t know. In Across Great Divides near the beginning, the twins’ are asked a question (which I personally believe is the most common twin question): “What is it like having a twin?” The response (as described by the narrator) is fantastic! It reads: “Neither had put much thought into it; since the day they were born, this was the only life they had known.”

This may sound simple, but surprisingly I’ve never actually read a book with twins where this accurate description of how twins feel about this question is illustrated along with a very real and believable interpretation of twins in general. While Inge and Eva definitely have more psychic ability than I ever have as a twin, I truly enjoyed reading about twins who didn’t read like an obvious cliché.

By the end of this lovely book, the only criticism I can give is that there were a few moments here and there in the story when the dialogue read a little stilted and a tinge unnatural. But it wasn’t very often and no doubt with time Monique Roy will ease into her gift for writing and any clunky dialogue will go the wayside.

Honestly, I was sucked into the suspenseful story from beginning to end and never wanted to put it down; I simply had to know what would happen next. In the midst of all the tragedy and prejudice which can be both heartbreaking and at times shocking, the carefully plotted story never loses the theme of hope. No doubt a lot of research was put into Across Great Divides and clearly the hard work paid off. I easily recommend this story without hesitation.

This story with its epic scope is meant to be a three part miniseries. A lot of time passes in the novel which would make it difficult for a simple beginning, middle and end feature film. And as for a TV Show, while it could still work, I think the story is best suited to an epic three night storytelling TV event. The story is separated into three parts which could easily be divided and fleshed out for an adaptation. Part One: Germany, the rise of Hitler and the family’s ultimate escape. Part Two: Love stories, Belgium and another escape. And then, Part Three: South Africa and Apartheid. Honestly, this would be a fantastic BBC period production with great acting, writing and authentic period costumes. I’d definitely tune in.

“Across Great Divides is a timeless story of the upheavals of war, the power of family, and the resiliency of human spirit. When Hitler came to power in 1933, one Jewish family refused to be destroyed and defied the Nazis only to come up against another struggle—confronting apartheid in South Africa.

Sixteen-year-old Eva and her twin sister, Inge, witness their lives in Berlin change before their eyes. Their best friend, Trudy, betrays them when she becomes a member of the Hitler Youth. A valuable family heirloom, a beautiful emerald and diamond pendant, is confiscated by the Nazis as they continue to harass Jewish families and businesses.

Their younger brother, Max, a member of the underground resistance, sees even greater danger ahead. Their father, Oskar, a diamond merchant with a thriving business, refuses to leave his beloved Germany and believes Hitler will eventually fail. Their mother, Helene, the elegant matriarch of the family, holds her family together.

The family is conflicted whether they should leave home. But after the devastation of Kristallnacht in 1938, they finally flee Germany with the help of the underground resistance after hiding many diamonds. They seek refuge in Antwerp, but war follows them as Belgium is occupied by the Germans.

A young German man, a nun, a countess conspiring against the Nazis, and a winegrower secretly hiding Jewish children, help them to escape Europe. They hike over the Pyrenees Mountains while eluding German patrols and Spanish informers. Then, they spend agonizing days on a ship bound for Rio de Janeiro that is targeted by a German U-boat. As Rio’s diamond business is corrupt, they decide to go to South Africa, another diamond market.

In Cape Town, Eva encounters an impoverished colored woman, Zoe, who is in need of work. The family hires Zoe as their maid and shields her and her daughter, Zola, from the dangers they face in the slums of District Six and from the horrors of apartheid, which are all too reminiscent of Nazi Germany.

But, when Max gets into trouble with the South African police over his participation in an anti-apartheid march, will he be subject to imprisonment?

In a thrilling conclusion, the family comes to terms with the evils of society, both in their memories and current situation in South Africa.”

Our romance-themed entertainment site is on a mission to help you find the best period dramas, romance movies, TV shows, and books. Other topics include Jane Austen, Classic Hollywood, TV Couples, Fairy Tales, Romantic Living, Romanticism, and more. We’re damsels not in distress fighting for the all-new optimistic Romantic Revolution. Join us and subscribe. For more information, see our About, Old-Fashioned Romance 101, Modern Romanticism 101, and Romantic Living 101.
Pin this article to read later! And make sure to follow us on Pinterest.
By Amber Topping on February 13th, 2014