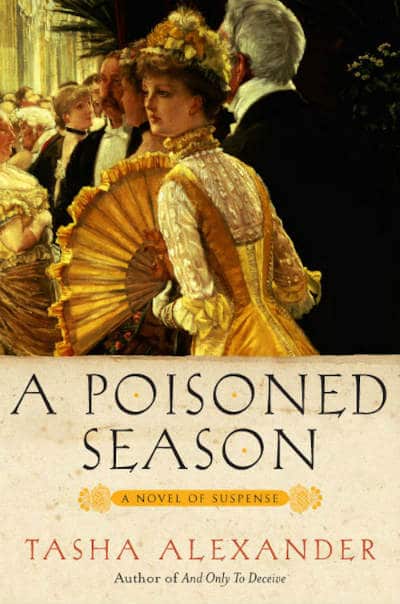 It’s Just One Soiree After Another

Lady Emily returns in A Poisoned Season with a brand new mystery set against the backdrop of London’s social season! Normally, the Season is spent schlepping from one party to the next. The goal? To see and be seen. However, Emily decides she will enjoy her summer on her terms and only accepts certain invitations. Unfortunately, Emily’s selectiveness has the opposite effect. Instead, it makes her one of the most sought after guests. So, for a short time, Emily finds herself swamped with invitations. Still, she remains elusive and only accepts invitations that peak her curiosity.

Related Post: And Only to Deceive – Intrigue! Secrets! Romance! Oh, My!

One such curiosity is one Emily shares with the rest of society. The ton is fawning over the self-proclaimed heir of Louis XVI and Marie Antoinette. Determined mother’s eye him with interest as they parade their daughters for his perusal. Emily decides to accept an invitation to a garden party in order to meet him. Unfortunately, Mr. Charles Berry proves to be a disappointment.  His manners are lacking and he has a propensity for drink and indecent proposals. However, the garden party was not a total waste of time – the very handsome Colin Hargreaves makes an appearance, setting Emily’s heart a flutter.

Two Eligible Bachelors and a Widow

Emily and Colin’s romance continues where And Only to Deceive left off. While she has not yet agreed to marry Colin, she did give him permission to court her. As a result, it’s clear Emily relishes the thrill of Colin’s pursuit and the blush of a new romance. The two engage in suggestive, verbal duels that leave Emily blushing.

“Oh, I’ll convince you, Emily. Never doubt it. By this time next year, we’ll be breakfasting together daily, and it won’t be downstairs.”

While it is common knowledge that Colin is pursuing Emily, the gossips turn their wagging tongues at the appearance of the Duke of Bainbridge at Emily’s home. Although he is simply doing a favor for Emily, society quickly misinterprets his presence. It’s not long before Colin, too, notices the Duke’s interest in Emily may not be so benign. He warns Emily about misleading the Duke, but she reassures Colin the Duke has nothing but familial feelings for her. Still, the gossips seize the moment and Emily finds her reputation in peril.

A Thief, An Admirer, A Murder

Emily’s love life and Mr. Berry is not the only fascination amongst the ton. The gossips are also obsessing over a cat burglar who is stealing valuable items once belonging to the Marie Antoinette. Coincidence, or not? Emily’s friend, Cecile, owns a set of diamond earrings that once belonged to the former Queen. It’s not long until the thief steals them, too. Emily is naturally upset by the theft. In particular, how the thief gained entry causes concern. After all, he entered the house through her bedroom and she never heard him.

In a strange but dangerous twist, the cat burglar becomes obsessed with Emily. He enters and exits her home and carriages, leaving her gifts and notes of his admiration. Emily refuses to be terrorized and instead, uses all her skill and intellect to unmask both the murderer and her admirer. Her task is complicated by a growing scandal that threatens her reputation and her romance with Colin.

When the owner of a stolen item once belonging to the ill-fated queen is later murdered, his wife begs for Emily’s help. The inspectors arrest a serving maid; however, the widow does not believe her capable. There is a lack of motive yet the investigators believe their case is closed. The widow entreats Emily to discover the truth.

“Find the truth, as you did when your husband is killed. Please. I’ve no one else to turn to.”

Emily agrees to help. After all, she better than anyone understands the need to know the truth behind the death of a husband. As Emily investigates the murder, the seemingly unconnected begin to connect. Drawn deeper into the mysteries surrounding the thefts, the murder, and her secret admirer, Emily uncovers a secret that spans generations and goes directly to the heart of the theft of Marie Antoinette’s belongings.

What I love about A Poisoned Season is that the action begins immediately. It continues at a perfect pace until the final chapter of the book. There are twists and turns and interesting connections. Not to mention an intriguing, unexpected discovery. Moreover, the action isn’t just the mystery. Now that she is out of mourning, A Poisoned Season introduces a new side to Emily. Her interaction with her peers provides more insight into her character. There are interesting moments of dichotomy as Emily gently encourages the following of the rules Emily herself will not follow.

It’s these very rules that lead to the threat to Emily’s reputation. Her intent was to help a friend by engaging the services of the Duke of Bainbridge. Instead, Emily is branded as a scandalous flirt. Initially, she is scornful at the double-standard to which the gossips subject her and her male peers. The rigid rules of society chafe at Emily’s independent nature; however, when one of her mother’s friends snubs her, she feels it keenly. Then, when Emily discovers the affect her thoughts on society have on her acquaintances, she is forced to self-reflect. She starts to examine her own behavior and how to better approach society.

“It was true that I found much of society tedious, but I never intended to make my casual acquaintances feel it so keenly. I wanted to be gracious, kind, to put others at ease, not to make them feel as  if I were sitting in judgment of them.”

A Poisoned Season also does not forget the slightly antagonistic relationship between Emily and her mother. It’s especially intriguing to see the normally critical Lady Bromley become the lioness in defense of her cub. This unexpected aspect of Lady Bromley’s character is surprising considering her own position in society. Further, it adds a layer of complexity to what could otherwise become a stale character.

Then there is the romance. A Poisoned Season brings Emily and Colin’s romance to life beautifully. Their relationship has a “realness” that is heartwarming. There is also a slow burn aspect that adds a delicious tension to their time together. Since the story is from Emily’s perspective, it’s her thoughts and feelings we are most intimate with. Yet, how Colin feels is never in doubt. He does not hide his emotions. Nor does he hide the affect Emily has on him. These glimpses into his heart, through Emily’s eyes, makes it impossible not to root for him.

“I think, Emily, that you are my ambrosia,” [Colin] said, almost in a whisper. I dropped my pencil.”

While A Poisoned Season is a first person narrative, the characterization does not suffer. Emily’s keen observations are key to this success. Little details make all the difference. Whether the posture of a debutante or a look in Colin’s eyes, her descriptions capture the emotion of the moment. In addition, A Poisoned Season builds on Emily’s fledgling sleuthing skills from And Only to Deceive. The lessons she learned solving the mystery of her husband’s death are ones she keeps close to heart. She does not make the same mistakes.

Overall, A Poisoned Season is a solid sequel to its predecessor. Previously one-dimensional characters are more rounded. The most improved is Colin. There is a new depth to his character. More nuance to his actions and his words that add intensity to his presence. This makes him all the more worthy of our spirited heroine. There are still a few leaps in logic the evidence does not support. But, this does not distract from the story. In addition, there a few minor liberties taken with the time period. Again, it is nothing so glaring as to take away from a fun and romantic read.

A Poisoned Season is another lovely read, perfect for a long, holiday weekend!

Are you reading Tasha Alexander’s Lady Emily series? If so, what do you think so far? A Fatal Waltz is up next and the stakes are higher than they’ve ever been before!

Our romance-themed entertainment site is on a mission to help you find the best period dramas, romance movies, TV shows, and books. Other topics include Jane Austen, Classic Hollywood, TV Couples, Fairy Tales, Romantic Living, Romanticism, and more. We’re damsels not in distress fighting for the all-new optimistic Romantic Revolution. Join us and subscribe. For more information, see our About, Old-Fashioned Romance 101, Modern Romanticism 101, and Romantic Living 101.
Pin this article to read later! And make sure to follow us on Pinterest.
By Catherine on May 25th, 2017