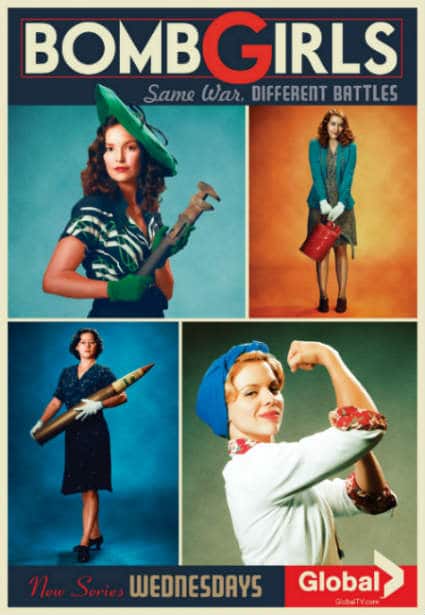 Perhaps it’s because for a period of time production companies were heavy into making WWII and 50s dramas, but I’ve been interested in seeing anything and everything I could get my hands on. If it was set in that time span, I was in. This was the latest casualty from one of my window shopping trips to some online retailer. Needless to say, I wound up getting a hold of a copy and became invested in the lives of the show’s characters. It’s primarily about five women and the fights they become embroiled in to do their bit in helping the war efforts.

The most world-weary among them is Lorna Corbett (Meg Tilly). A wife and mother, Lorna lived through the first war during which her husband (Peter Outerbridge) returned more than just physically scared. Now, Lorna is doing her part by working at Victory Munitions where she is a line leader.

Then there is Betty (Ali Liebert). Betty’s a tough no-nonsense girl who harbors a secret and also looks out for new girl Kate Andrews (Charlotte Hegele). Kate has been abused her whole life and doesn’t know what the real world is like. But underneath the watchful eye of her new friends, she’s flourishing.

Vera (Anastasia Philips) is the happy-go-lucky girl who enjoys dances and the attentions of any guy in uniform… but life as she knows it quickly changes when tragedy strikes. Finally, there is Gladys (Jodi Balfour), the wealthy girl who has to prove the most. Using her job to act out and is hiding her employment from her powerful father, Gladys is about to be married, but wants to prove herself capable of more than her fiancé and father assume of her. 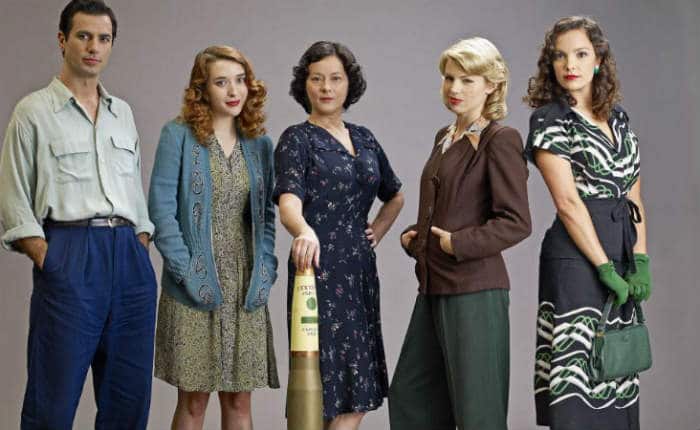 Most of us may assume this is the same kind of series as many other female led WWII dramas, which is fair because there are quite a handful of them. But this one is unique. It takes place in Canada so it looks at different angles and the possibilities of the Canadian men suiting up to join the war effort. Though many Canadian men are already among the ranks, the women are additionally making bombs for their allied forces fighting oversees, yet the series also has time to tell the stories of these women’s live because they aren’t living on soil that is targeted by bombings.

The actresses who bring these stories to life are an amazing group of talent. Everyone’s characters are vastly different, which brings up debates spilling over social divides and the varying pasts these women are hiding. Some of the issues that crop up seemed to wander into territory that I felt wasn’t done in the best of tastes, but for the most part, it’s the characters that keep us invested.

Lorna is the woman fighting an attraction to someone she despises and is prejudiced against (an Italian played with charisma by Antonio Cupa); Kate is the sheltered girl with the most to lose and Gladys (her relationship with her father is particularly interesting with its many tension-laced confrontations) is the spoiled rich girl who desperately wants to prove her mettle. Each of them has something unique to give and I loved how interesting this band of women is. No two were really alike. Cliché or not, when they joined arms (if you will), they were stronger and better together. This is also when the show’s at its best. True, it’s a perspective filmmakers like to tell – the war through the eyes of women, still Bomb Girls has a handle on how best to show both sides of the coin. The scripts are able to convey the toll of war while also, emotionally, sharing more than “just” the trials of war. 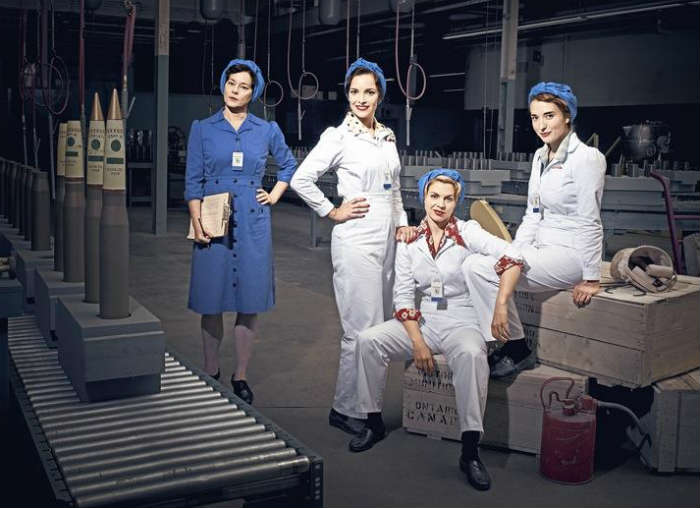 Those of us who have liked The Bletchley Circle or Land Girls (both British productions) will find a lot to enjoy in this soapy Canadian drama. It’s not perfect and strays into stories (like Gladys’ aggressive pursuit to become intimate with someone and the resulting story) that I didn’t feel added anything to the plot or not at least in a constructive manner, but at its heart, there’s potential. One such example is the strength of the friendships between these women – the story that is most poignant is seeing everyone rally around Vera.

Unfortunately, Bomb Girls (which is no longer airing on TV) is more difficult to find. Far as I can tell, it’s only available on DVD in regions that aren’t compatible with American DVD players. However, it is available to stream on the U.S. Netflix so that may be your best bet if you live in the United States. Overall, if you like the history of the period and do run across the show, it might be worth watching. It’s of a different sort, but these girls are brimming with courage and moxie, which makes some heartwarming and entertaining television.

Have you seen Bomb Girls? If so, let me know what you thought about it.

Our romance-themed entertainment site is on a mission to help you find the best period dramas, romance movies, TV shows, and books. Other topics include Jane Austen, Classic Hollywood, TV Couples, Fairy Tales, Romantic Living, Romanticism, and more. We’re damsels not in distress fighting for the all-new optimistic Romantic Revolution. Join us and subscribe. For more information, see our About, Old-Fashioned Romance 101, Modern Romanticism 101, and Romantic Living 101.
Pin this article to read later! And make sure to follow us on Pinterest.
By Rissi JC on July 1st, 2015