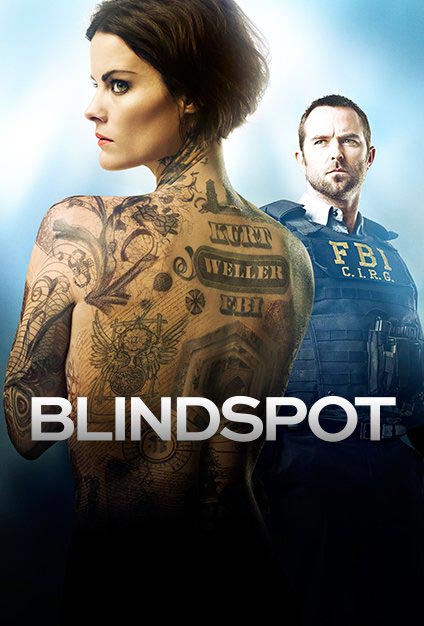 “A beautiful woman, with no memories of her past, is found naked in Times Square with her body fully covered in intricate tattoos. Her discovery sets off a vast and complex mystery that immediately ignites the attention of the FBI, which begins to follow the road map on her body into a larger conspiracy of crime, while bringing her closer to discovering the truth about her identity.” 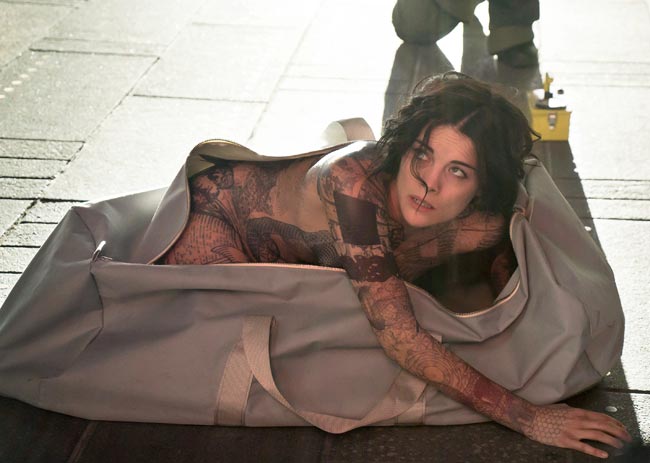 Very few pilots have me hook, line, and sinker right off the bat. Blindspot does just that with a captivating mystery, fantastic cast, and an addictive premise that will definitely have me tuning in every week (this show will definitely be a high priority).

The episode begins with a naked, tattooed woman coming out of a zipped bag. She doesn’t know who she is, but the tattoos all mean something, including the most important one on her back: the name of Kurt Weller, an FBI agent. We are left to ask the question: why is his name on her back? He doesn’t know her, but as soon as they meet, there is certainly a feeling of connection.

Reluctantly, and as the FBI figure out one of her tattoos are written in Chinese with that exact date (and the fact that their Jane Doe can speak Chinese), Weller lets her in on the case. Together, they attempt to prevent a bomb going off that very same day. Her tattoos are way more important than they realized.

While out in the field, Jane Doe goes all Jason Bourne with her combat skills. There’s definitely more to the story here, with even a mysterious man from her past watching them in the distance. We are left to wonder: Is she a villain? Is she from the future? Something else altogether? Only time will tell, and hopefully, the show can maintain high ratings so it has time to answer everything. It really is that interesting.

Aside from the mysteries surrounding the show and Jane Doe, the connection and chemistry between Seller and Jane are the real standout in my book. More than a “will they, won’t they” element is an underlying feeling of something deeper than the typical partner romance in a procedural show like Castle or Bones. With several intimate moments between the two (including her saving his life and a couple of hugs), I get a sense of some kind of soul connection. There’s something very Alex O’Loughlin (Mick St. John) in Sullivan Stapleton’s performance which has me absolutely intrigued.

Jamie Alexander is also fabulous in the role, with some nice callbacks to her performance in the underrated Kyle XY. In fact, there are no weak links in the cast, which tends to happen in almost all the pilots out there.

Overall, if you haven’t checked out Blindspot you should. If you don’t like procedurals, Blindspot promises to be way more of a serial than most, concentrating heavily on mythology. While the pilot isn’t perfect (some moments are a little rushed), it is immensely entertaining. I know I’ll be tuning in next week…

What did you think of Blindspot? Will you be tuning in weekly? Sound off in the comments…

Our romance-themed entertainment site is on a mission to help you find the best period dramas, romance movies, TV shows, and books. Other topics include Jane Austen, Classic Hollywood, TV Couples, Fairy Tales, Romantic Living, Romanticism, and more. We’re damsels not in distress fighting for the all-new optimistic Romantic Revolution. Join us and subscribe. For more information, see our About, Old-Fashioned Romance 101, Modern Romanticism 101, and Romantic Living 101.
Pin this article to read later! And make sure to follow us on Pinterest.
By Autumn Topping on September 22nd, 2015