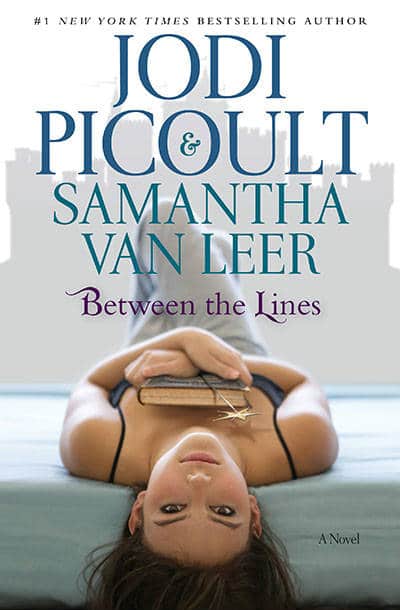 According to her website, Jodi Picoult has written 24 novels and many of them have been bestsellers. When I think of Jodi Picoult, I think of hyper-realistic fiction that usually involves the law in some capacity (I think this stems from my “Law and Order” phase and what I was reading at the time, not necessarily a requirement of her writing). However, she has, in my opinion, an amazing ability to write about current and controversial topics while exploring a variety of perspectives.

For Between the Lines, Picoult teamed up with her daughter Samantha Van Leer, who was in her early teens at the time. According to interviews, Van Leer had been thinking about books in class (like we all do), and found herself wondering what happens in books when we’re not reading them, and why does that book (talking about the secret lives of characters) not exist? Van Leer’s question of what happens within a book when it’s not being read took shape and Between the Lines was born.

Between the Lines is different than other Jodi Picoult stories in that it is unabashedly a fairy tale. The story follows two different characters, high school loner Delilah and handsome (but book bound) Prince Oliver. Delilah is obsessed with fairy tales and one story, in particular, Between the Lines, by Jessamyn Jacobs (that gets less confusing as you get used to it). Between the Lines is a story that follows the cowardly but clever Prince Oliver on his dangerous quest to save the beautiful Princess Seraphima.

As we learn, however, the characters in the book are different when the book is closed. Frump the dog is an enchanted knight in love with the princess, the pirate captain is an orthodontist and the evil wizard loves to collect butterflies and paint (apparently he’s actually quite a nice guy). As we read, we see the characters in the story and their real selves through Oliver’s eyes.

RELATED: 15 YA Fairy Tales On My Shelf

Basically, the characters are all actors who act out the same stories and the same emotions every time the book is read, and then become their real selves when the book is closed. First of all, this is a great idea and I love it. Second of all, this leads into the main conflict of the novel: Prince Oliver is unhappy in his world and desperately wants to get out. When he is acting his part, he can pretend to love the princess, but he really doesn’t and wants more than what he has.

Enter Delilah, a fifteen-year-old loner who, one day, sees a change in this book she’s rereading. Oliver had drawn on the sand and the book didn’t erase it, which is apparently not how things usually go inside books. Whenever a reader opens the book, there should be a reset button and everyone goes to the page that the book is opened too. However, this goof does lead to the discovery that Oliver and Delilah can communicate.

As they spend time together, they start to develop feelings for each other, which is a tad awkward as Oliver is still trapped between the lines. Together, they step up their hunt to try to find a way to get Oliver out of the book. The whole situation leads to confusion and isolation for Delilah, as she is now seen talking to a book, and a need for secrecy from Oliver because no one in his story can know that the main character is trying to escape.

Between the Lines  asks some interesting questions. Can a character from a book leave his or her story? Can one change their fate? Is it right to mess with someone else’s dreams? And what does happen when a book is closed? Many of these are answered, but in such a way as to let the reader make up their own mind (something that Picoult does very well, so I wasn’t surprised to encounter that here).

I don’t want to spoil anything major, but I will say that there is a visit to the author and her son (who Prince Oliver was based on) and an ending that is truly worthy of a modern fairy tale. The supporting characters get appropriately suspicious of both leads, and the consequences, though solved fairly briskly, feel real.

The book itself is set up in a very interesting and fun fashion. It opens with the beginning of the fairy tale Between the Lines, with the text in a black font and with beautiful color illustrations. After introducing us to the fairy tale, the authors introduce us to Oliver, whose chapters are always in purple. The Oliver chapters always transition into a Delilah chapter, which are always in green. This helps keep the three threads of the story separate.

I like the setup because we not only get the original fairy tale (which I really enjoyed), but we also get the point of view of the two main characters. This allows readers to see both sides of the story. Although I personally found Delilah to be a less compelling character than Oliver, she does grow on you as the novel progresses.

Oliver was a fascinating character from start to finish. He spends the entire book trying to figure out if there was more to life, trying to escape a destiny that he didn’t want and, honestly, he was pretty fun to follow in his quest both in the novel and the story within the novel. I love reading about quick-witted characters.

The romance was interesting, mostly because the characters don’t actually know each other that well. They communicate both in the beginning and while trying to get Oliver out of the book. Additionally, when Delilah gets written in they have time together in person, but really, the book is a set-up for the relationship to develop later off-screen.

Like Delilah herself, the romance grew on me. The way it was set up seemed more organic and less forced, especially when Delilah points out that she is only 15, and that maybe they should try dating before talking about marriage. It’s a more realistic approach to the fairy tale genre, and it was kind of refreshing. Of course, the book did gain romance points because these two characters crossed through fiction and reality to be together. This bumps it up from the “3” I was going to give it to a “4.”

If you like modern fairy tale adaptations or books about books, check out Between the Lines. Overall, it was a fun and interesting take on an idea that, I’ll be honest, I have wondered about at times. The romance seemed a bit rushed, but it was still really sweet. I found myself caring about the characters and hoping that they would all get a happy ending. Not to give any spoilers, but it is a fairy tale. Written with both a sweet and lilting tone and distinct character voices, it’s well worth the time it takes to read it.

I have to be honest, I think this book would be very challenging to translate to film because it is a book about characters in a book coming alive and living outside the story. So much is based in the characters’ minds or in the artwork; it would be very difficult to properly translate to film. Maybe an animation/live action film ala Mary Poppins would be best (not CG animation, 2-D animation)?

If it was made into a movie, I feel like both Picoult and Van Leer would have to be involved in a very serious way, to make sure that their vision translates well. I could see Logan Lerman as Prince Oliver, but there is a YouTube Channel series that features Prince Oliver and is sponsored by the authors so that actor would probably be a better choice for Oliver (check it out here).

Our romance-themed entertainment site is on a mission to help you find the best period dramas, romance movies, TV shows, and books. Other topics include Jane Austen, Classic Hollywood, TV Couples, Fairy Tales, Romantic Living, Romanticism, and more. We’re damsels not in distress fighting for the all-new optimistic Romantic Revolution. Join us and subscribe. For more information, see our About, Old-Fashioned Romance 101, Modern Romanticism 101, and Romantic Living 101.
Pin this article to read later! And make sure to follow us on Pinterest.
By Bailey Cavender on October 17th, 2015