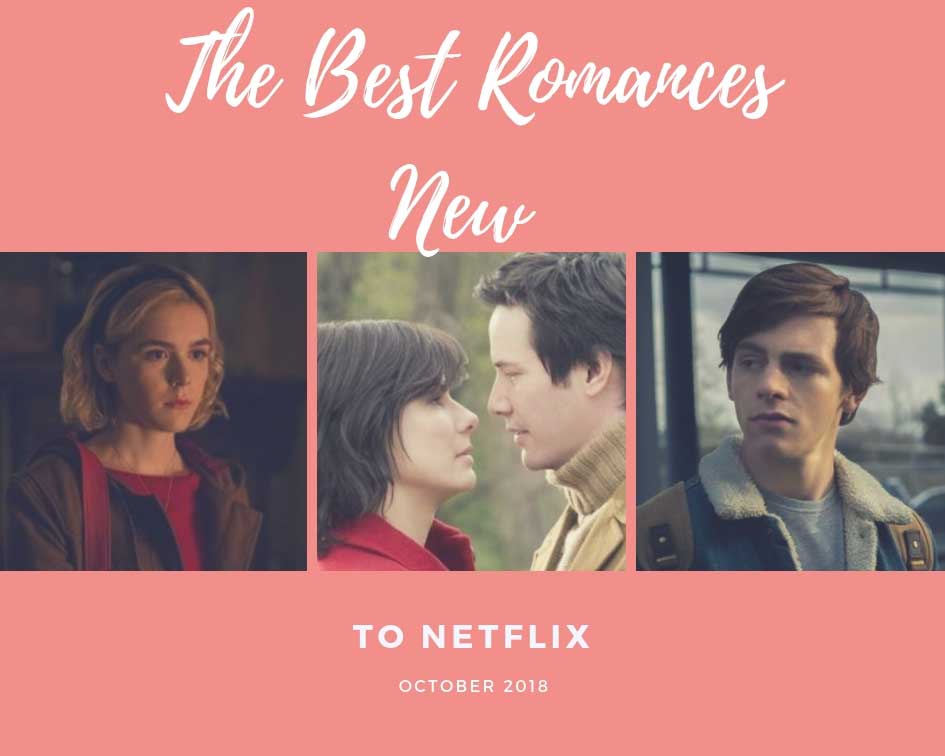 The month of October has a mix of new and old for all the romance fans out there! And if you’re a fan of the Sabrina/Harvey romance from Sabrina the Teenage Witch, there’s a new adaptation coming your way soon. Here’s to hoping the adaptation (with its fabulous cast) turns out to be fantastic and not as dark as the teaser looks.

With that said, let’s take a look at my romantic (whether a straight romance or a movie/show with romantic subplots) recommendations below for Netflix October 2018, each with the synopsis, rating, and Netflix release date. Titles are listed in alphabetical order.

IMDB Synopsis: A dedicated single mother who, on an unusual night on the town, is charmed by a handsome yet troubled stranger.

Netflix Synopsis: As her 16th birthday nears, Sabrina must choose between the witch world of her family and the human world of her friends. Based on the Archie comic.

(Hopefully, it won’t be AS dark as this teaser looks.)

Netflix Synopsis: This Allan Moyle comedy — which ultimately gained cult status among die-hard fans — captures a day in the life of a record store that doubles as a meeting place for young slackers, dreamers and doers. When a clerk (Rory Cochrane) gambles away the store’s cash, the boss (Anthony LaPaglia) tries to recoup his losses. Meanwhile, flirty Gina (Renee Zellweger) provides a counterpoint to love-struck Corey (Liv Tyler), who’s crushing on a co-worker.

IMDB Synopsis: Gordon fears Jonathan Crane is still alive and back in Gotham, when The Scarecrow’s signature MO is used in a series of robberies. Meanwhile, Penguin’s “licensing” of crime in the city backfires during the grand opening of his new Iceberg Lounge. Also, in the aftermath of his encounter with Ra’s Al Ghul, Bruce begins his vigilante watch.

Netflix Synopsis: A cohabiting couple in their 20s navigate the ups and downs of work, modern-day relationships, and finding themselves in contemporary Mumbai.

Netflix Synopsis: Divorcée Sarah Nolan isn’t ready for romance. But when her sister signs her up for an online dating service, love-seeking mates come calling. While one Mr. Maybe is rife with possibilities, another is even more intriguing.

Netflix Synopsis: Twins Jane and Roxy couldn’t be more different: Jane is a straight-A student, while Roxy’s a punk-rock rebel. But when they accidentally land in the middle of a criminal operation, they’ll have to work together to get themselves out of trouble.

Netflix Synopsis: In this gentle drama from director Mimi Leder, young Trevor McKinney (Haley Joel Osment) responds to a school assignment with a plan to help three people who will, in turn, help three more, and so on, in an ever-widening circle. But Trevor touches more people than he expected, including his abused mother (Helen Hunt), his physically and emotionally scarred teacher (Kevin Spacey) and a journalist (Jay Mohr) who’s investigating the plan.

Netflix Synopsis: Kevin Costner stars as Sherwood Forest’s outlaw hero in this 1991 version of the classic tale of intrigue, romance and pageantry. When the dastardly Sheriff of Nottingham (Alan Rickman) murders Robin’s father, the legendary archer vows vengeance. To accomplish his mission, Robin joins forces with a band of exiled villagers (and comely Maid Marian), and together they battle to end the evil sheriff’s reign of terror.

Netflix Synopsis: This romantic drama stars Richard Gere as Confederate soldier Jack Sommersby, who goes home to his wife Laurel (Jodie Foster) after the war. But she assumed Jack had died, and became engaged to another man. Wracked with guilt, she takes Jack back. But while she never previously loved him, he’s returned a new man. His benevolent acts attract the attention of Laurel’s scorned beau, who digs into Jack’s past and finds he’s a wanted man.

Netflix Synopsis: After moving away from her peaceful lakeside home, a lonely physician begins writing letters to the frustrated architect who now occupies the building, only to discover that they’re living two years apart and connected by a mysterious mailbox.

Netflix Synopsis: When a secret from the past rears its head, a respected court scholar must choose between avenging her family and staying true to the prince she loves.

This month, you may also want to check out The Neverending Story, Apostle, Daredevil Season 3 (TV-MA), and more.

What romances do you plan to watch on Netflix this month? Leave a comment below and let me know!

Our romance-themed entertainment site is on a mission to help you find the best period dramas, romance movies, TV shows, and books. Other topics include Jane Austen, Classic Hollywood, TV Couples, Fairy Tales, Romantic Living, Romanticism, and more. We’re damsels not in distress fighting for the all-new optimistic Romantic Revolution. Join us and subscribe. For more information, see our About, Old-Fashioned Romance 101, Modern Romanticism 101, and Romantic Living 101.
Pin this article to read later! And make sure to follow us on Pinterest.
By Amber Topping on September 27th, 2018