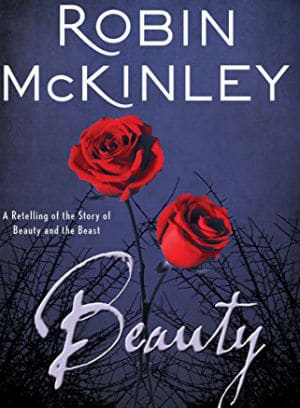 There are some authors who, whenever I see their name on a book, I have to pick it up. For me, one of those authors is Robin McKinley. McKinley writes fairy tales and fantasy stories, and she’s won several awards for her writing. All of her books are magical tales, told using rich language with compelling characters. Her novels tend to be told in the third-person, but there is one exception. This exception is Beauty: A Retelling of Beauty and the Beast.

Published in 1978, Beauty is Robin McKinley’s first novel. It’s a retelling of “Beauty and the Beast, a story that is always being retold and imagined, and it’s easy to see why. The story is a timeless tale about looking beyond what we see. Beauty is not just physical beauty, but the character of a person. She is always beautiful inside and outside, while the Beast character softens as the story goes on.

Beauty is a twist on the traditional tale. While Beauty usually has siblings, in this story, the two sisters are fleshed out characters with names and personalities. It’s also an interesting take on the tale because there are no villains. The family is actually very close. Really, the story is about two people thrown together in strange, unexpected circumstances, and how they adapt to it. With the addition of Beauty’s very practical mindset and her narration, the story takes another turn. She is telling us a story about her life, and her personality shines through.

Beauty and her sisters, Grace and Hope, are the daughters of a merchant in a large city. They are pretty wealthy, with Grace becoming engaged to Robbie, a young captain who sails for their father. However, one day a storm at sea wipes out the family fortune and Robbie is among the missing. Left with nothing, the family moves to the country to start over. This is a place where Beauty fits in. The group is warned to stay out of the nearby forest, where a beast is said to live.

As in most “Beauty and the Beast” stories, the father finds himself lost in the forest and steals a rose for his youngest daughter. In this version, both Beauty and her sister Grace offer to go. When Beauty goes to the castle, she finds that, as the time goes by, the Beast is actually not as awful as she thought and they become friends.  In the tradition of the original story, every night Beast still asks Beauty to marry him. Every night, she refuses. As she and Beast become closer, Beauty learns something that she needs to tell her family, who she misses dreadfully. Will she ever see them again? Will Beauty and Beast fall in love?

Overall, Beauty is an engaging character and narrator. She knows her flaws and isn’t afraid to share them as she tells her stories. As a character, she is very aware of herself and her surroundings and shares them as she remembers. She truly grows as a character, coming into her own as the story progresses.  She’s a flawed character, but it doesn’t make her less likable. Personally, it makes me like the character more. Beauty sees herself as a plain bookworm who is fairly intelligent, but several characters disagree with her, including Beast.

Then there is the romance. The most important relationship in any retelling is the one between Beauty and the Beast. In the novel, once Beauty realizes that she is not going to be baked into a pie, she has a surprising amount of sympathy for Beast. When she realizes that he has been trapped alone for many years, she reluctantly tries to be friendly. To her surprise, she and Beast have a lot in common, including their sense of humor.

As the novel progresses, Beauty and Beast becomes friends, though she still misses her family. The love story is a slow one, and that makes it believable. It doesn’t feel like Stockholm Syndrome to me; they become friends and then they fall in love (but they’re also both in denial for a while about it).

The only thing I would nitpick about this book is the fact that I think it should have ended two pages earlier.

When it comes to first books, Beauty is a winner. It’s pretty amazing. If you look at the novel as a retelling of the classic tale, it stands out as a sweet, engaging, and romantic story about one of the most beloved fairy tales ever written. If you like fairy tales, stories with engaging characters, or reading about friends who fall in love, you might really enjoy this particular positive retelling.

Like with most adaptations, as long as the author is involved in adapting the story into a movie, this could be magical. This is a story with a variety of characters and now that we have CGI/live-action hybrid films, the magical objects and invisible servants could be brought to life!

It would be important to have Robin McKinley write the screenplay (or at least have strong involvement) because the story is told in Beauty’s voice. I think that this style of storytelling would have to be kept in place for the movie to work.

For casting, I imagine Colin Morgan as Beast, Sarah Bolger as Beauty, Emma Stone as Grace, and Alexandra Daddario as Hope. I then see Diego Luna as Robbie and Aaron Tveit as Ger. I also hear Felicity Jones and Judi Dench as the voices of Betsy and Lydia, with someone distinguished as the father (I’m thinking Michael Caine or Alec Baldwin).

Have you read Beauty? Who are your casting ideas? Let me know in the comments!

CONTENT WARNING: There are some moments of peril, but it feels like it is written for a younger audience.

Our romance-themed entertainment site is on a mission to help you find the best period dramas, romance movies, TV shows, and books. Other topics include Jane Austen, Classic Hollywood, TV Couples, Fairy Tales, Romantic Living, Romanticism, and more. We’re damsels not in distress fighting for the all-new optimistic Romantic Revolution. Join us and subscribe. For more information, see our About, Old-Fashioned Romance 101, Modern Romanticism 101, and Romantic Living 101.
Pin this article to read later! And make sure to follow us on Pinterest.
By Bailey Cavender on March 15th, 2017