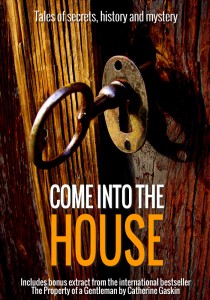 From Versailles to Mount Vernon, from samurai homes in Takayama to farm houses in Sognefjord, historic houses can transport us into the past in a way nothing else can.  Last year, I was lucky enough to be selected as a finalist in the Historic House Short Story Competition, run by Corazon Books in association with the Historic Houses Association.  Now all ten winning stories have been published in a slim volume – Come into the House –  available exclusively through Amazon.  For such a small book, there is an incredible amount of variety.  An old woman sitting on a park bench with Dracula outside Bram Stoker’s home in Dublin; the voice of the tiny spark in Pudding Lane that started the Great Fire of London in 1666; a visit to Bronte parsonage that leaves a girl questioning what is and isn’t real; even a classic locked room mystery.  Together, the stories celebrate all that is best about the great British and Irish historic house.

My own story for the competition “The Yorkshire Defiance” is inspired by Shibden Hall in Halifax, West Yorkshire.  Outside the local area, Shibden is best known for being home to lesbian diarist and landowner Anne Lister in the 19th century.

But there is much more to the Hall than Anne Lister.  When I went to Shibden Hall to write my entry for the competition – “in situ” – I drew inspiration from 18th-century family portraits in the Great Hall, and from earlier members of the Lister family.

One such character was Martha Lister, who grew up at the Hall along with her sisters, attending the local dame school, and benefiting from the instruction of a dancing master and a pastry master!  In or around the 1720s-30s, she eloped with one William Fawcett, who subsequently abandoned her, forcing her to return to Shibden Hall with baby William in tow. In the 18th century, I should imagine this would effectively mark the end of any social life Martha might have had.  She became the central inspiration for my story.

I was also intrigued by the career of her three brothers, Thomas, William and Jeremy.  (A lot of Williams in the early 18th century!) They bought shares in a ship called The Yorkshire Defiance, which traded with the American colonies.  Sadly, the brothers were not good businessmen.  They bought a load of deer skins, which arrived in Britain in a ruined and unsaleable condition. Thomas bought and sold 15 slaves, although his brothers couldn’t understand why.  William then moved to Virginia, and later Carolina, where he married and acquired property.  But his life ended when he was lost at sea in 1743.

More recently, I have discovered a possible link between my story and a recent TV documentary, Britain’s Forgotten Slave Owners.

When slavery was finally abolished completely in Britain – in The Slavery Abolition Act of 1833 – the same act that freed 800,000 Africans who were then the legal property of Britain’s slave owners also provided financial compensation to the owners of those slaves, for the loss of their “property.”  The total payout was £20m, the modern equivalent of between £16bn and £17bn. University College London has set up an online database, allowing members of the public to search the records and discover who was paid out what, bringing this dark area of history to light.  When I searched the records for Halifax, there was one payout – to Shibden Hall and one Louisa Ann Grant, who was paid £12765 13S 8D (12765 pounds, 13 shillings and eightpence ) for the “loss” of 485 enslaved workers in St Vincent.  Could this be a legacy of The Yorkshire Defiance?  And could this money have been what allowed Anne Lister to make her extensive improvements to the Hall and grounds in the 19th century?

To discover more about Come into the House, visit Corazon Books’ website:

Our romance-themed entertainment site is on a mission to help you find the best period dramas, romance movies, TV shows, and books. Other topics include Jane Austen, Classic Hollywood, TV Couples, Fairy Tales, Romantic Living, Romanticism, and more. We’re damsels not in distress fighting for the all-new optimistic Romantic Revolution. Join us and subscribe. For more information, see our About, Old-Fashioned Romance 101, Modern Romanticism 101, and Romantic Living 101.
Pin this article to read later! And make sure to follow us on Pinterest.
By Elizabeth Hopkinson on August 21st, 2015