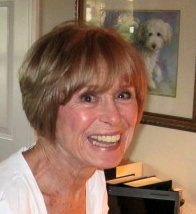 Today we are blessed to have the award-winning and bestselling author, Bette Lee Crosby, to take some time and tell us a little bit about herself and her books (Spare Change, The Twelfth Child, etc…)

Amber: Congratulations on your success as an author, and on becoming an Amazon #1 bestseller at that! Can you tell us a little bit about yourself and your background?

Bette Lee Crosby:  More than anything else, I am a storyteller. I spend many years in advertising and wrote for a living, but that is a learned skill. Storytelling is something that comes from your heart. My success did not happen overnight, it really came about from readers suggesting the book to one another, and from reviewers who were kind enough to take a chance on a relatively unknown author.

How would you describe your style of writing to new readers? What can they expect when they read one of your books?

I’d like to believe my books are a lot like life itself. Although there are many challenges the protagonist has to overcome, there is always the hope of a brighter future. Overall I’d say my books are heartwarming with touches of mystery thrown in and some ironic twists you never expected. I especially love writing about older people and children because they are so open and forthright, which makes for a very interesting character.

I just finished reading your book Spare Change, and absolutely loved it. What really stood out to me were the voices of the characters. Where did the inspiration for these characters come from?

Before I even start to write the story, I can see the characters in my head. I live with them and learn to think as they would think. I pull bits and pieces of personality from almost everyone I have ever crossed paths with and ultimately come up with I honestly feel is a real person.

Spare Change has been a huge success for you with characters I think many people will truly connect with. Is that what brought about the decision to continue on with the characters and create the Wyattsville Series?

Yes. Spare Change was written as a standalone novel, but the readers became so attached they started asking for a sequel and the truth was that I enjoyed the characters so much that I was happy to revisit them.

What can you tell us about book two in the series, Jubilee’s Journey which will be released in October 2013? Will this one be the last in the series, or can readers expect more in the future?

I tend to think of “Jubilee’s Journey” as book two in a series because it doesn’t really continue the story of Spare Change, but a part of it takes place in Wyattsville with many of the Spare Change characters reappearing. “Jubilee’s Journey” is a heartwarming story of survival and could almost be considered a standalone novel. For me, it was the best of both worlds, an entirely new story and the characters I already know and love.

When I read, I can’t help but see things very visually. Ultimately, I start to imagine how each book I read would work as a movie (or as a show). Has the idea of adapting any of your books into film been something you’ve considered? I personally think Spare Change would be fantastic on the big screen because of the strong narrative, suspense, and distinct characters.

Absolutely…Hollywood are you listening? …I started out as an artist so I see every one of my stories visually long before I write them. I think that’s probably why I use a lot of dialogue in my books – I see and hear the characters saying those words. As an author, I just step back and let the characters tell their story.

Is there a character in any of your books you most relate to? If so, who and in what way do you relate to them?

There is a piece of me in almost every character I create, but the one I think I identify most strongly with is Olivia Doyle from Spare Change. I have lots of silly quirky notions just as she does and I’m probably also just as determined and strong-willed as Olivia. Also like Olivia, once I love someone, I love them forever.

What lasting impression do you want people to take away after reading one of your novels?

My goal with every book I write is to leave the reader feeling better when they finished the book than before they read it. There is so much generosity and goodness in life, but sometimes today’s media only focuses on the bad. I want my books to acknowledge the bad but show the underlying good that is there.

Are there any other upcoming projects you’re working on after Jubilee’s Journey comes out? What can fans expect next?

I will be starting a new book within the month. I always have to have something I am working on, but before I start I have to get to know the characters and I have to discover the heart of the story. Right now I have several concepts circling through my brain. I am considering a follow-up story to The Twelfth Child, which like Spare Change became a reader favorite and one that definitely left the door open for a sequel.

Where can readers follow you or stay up to date with your upcoming projects?

On my blog at http://betteleecrosby.com, I post on the blog usually several times a week and I talk about anything and everything, including my dog and my life. For those who want to subscribe to my newsletter, there are lots of perks and special offers. And if someone is not yet tired of me by then, I have a private Facebook Fan Club that they can request to join. (friend me on Facebook, tell me you’re a fan and ask to join) Bette’s BFF Clubhouse (Best Friends & Fans) is a fun place to hang out and there is always something going on. These gals also get lots of perks and early peeks at almost everything.

We also like to do something a little fun here at The Silver Petticoat Review where we ask our interviewees a series of fun pop culture questions (our “Petticoat Personality Test” if you will) to close the interview. First up, what is your favorite book, movie and/or TV Show?

Although I have to say, I am not a big TV person – I most often would rather read, but of the TV shows that I do watch, Castle is a big favorite.

The character of Rick Castle – he’s an author, he’s quirky, he’s at times soft-hearted, and he forges ahead even when he’s uncertain of what he’s doing. I love that he wears a bulletproof vest that instead of saying NYPD says “Writer” – for me that’s funny.

Sportscasters who feel they have to scream every comment as though the world wee now coming to an end.

Is there any movie or TV couple past or present that you obsess over?

Right now I love the life I’m living and I’m happy to just be me, but if I had to choose, I’d say a female version of Rick Castle (no big surprise, right?)

I just started reading The Mill River Recluse, it’s very good but a bit brutal in the chapter about Monarch the horse.

Any guilty pleasures? Some days it’s candy and ice cream, other days it’s chips and cheese. Every day it’s that single glass of wine before supper.

I’d be my own dog because she lives a VERY good life. Pampered, spoiled and given lots of treats.

LOL, of course, I’d have to say Spare Change. Like John Grisham’s “The Client” I think this story would come alive if you had the right kid to play Ethan Allen.

You can find all of Bette Lee Crosby’s books to buy at Amazon.

For my full thoughts on the book Spare Change by Bette Lee Crosby, read my review.

Our romance-themed entertainment site is on a mission to help you find the best period dramas, romance movies, TV shows, and books. Other topics include Jane Austen, Classic Hollywood, TV Couples, Fairy Tales, Romantic Living, Romanticism, and more. We’re damsels not in distress fighting for the all-new optimistic Romantic Revolution. Join us and subscribe. For more information, see our About, Old-Fashioned Romance 101, Modern Romanticism 101, and Romantic Living 101.
By Amber Topping on August 28th, 2013