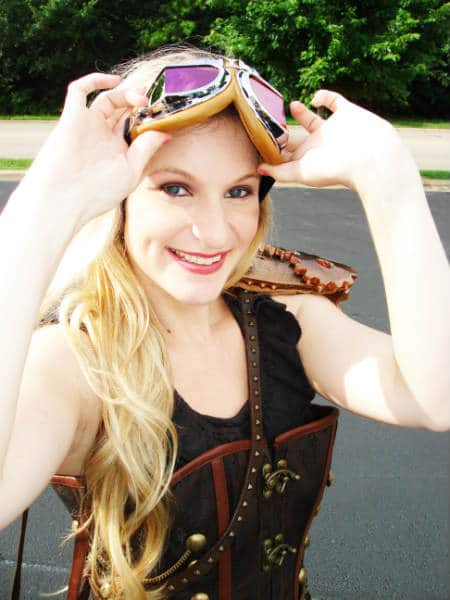 Today we want to welcome Bridget Ladd, author of The Lotus Effect(A YA Steampunk novel), who is here to take our “Petticoat Personality Test.” Read on to find out a little bit more about her and her book:

I assume I’m not alone when I cringe when asked this question. There’s so many to choose from! Where do I start? Let’s see . . . here’s a few:

Favorite Movies: The Fifth Element, Tangled, Stardust, Star Wars, The Mummy (hah, no laughing) District B-13 (it’s a French movie with two guys adept at Parkour, who I must say are easy on the eyes.) Jurassic Park, cheesy Arnold movies like Predator and Total Recall, Lord of the Rings, Pandorum, Warm Bodies . . . . Anything with action, fantasy, science fiction, and romance twisted together, usually wins me over.

I mention him further down, but when I was younger, I always had a crush on Drizzit Do’Urden from R.A. Salvatore’s Forgotten Realms novels . . . hahaha. Seriously, that Drow is WAY too cool. Here’s one of my favorite covers with him on it:

To be honest? Anyone who complains a lot, or the ‘I’m a bad boy, look at my bad boyness, behold the bad boy in me . . . .’ (some is okay), but when they become verbally or physically abusive, that’s when they cross the line—even if they apologize later for it.  Ladies, they’re not hunks with dark pasts, they’re self-absorbed cowards.

Absolutely! YouTube playlists are handy. They can play for hours, which helps to kick-start my writing. The user ‘ThePrimeCronus’ has some great playlists uploaded. He often includes epic scores from Audiomachine, Two Steps From Hell, Fired Earth Music, Thomas Bergersen . . . etc. All of which I find to be great inspiration for my fighting, action, and or dramatic scenes.

Currently, I love Nick and Jess from New Girl. At one point, it was Amy Pond and Rory from Doctor Who. (The Pandorica Opens episode had me swooning.) And for Anime fans, Kirito and Asuna from Sword Art Online.

This is another tough question. There are so many characters I’d like to live as, and so many I wouldn’t want to, considering us writers put characters through some really rough situations. But if I had to pick a place, I think I could live in the Midlands of the Legend of the Seeker world. Someone who fights evil like Cara or Kahlan. (Though I’m not sure, with Cara, I’d want to sign up for her Mord Sith upbringing.)

I would even option to be a Sith female in the Star Wars universe. One who has a change of heart and secretly fights all the bad guys. I love that type of character dynamic.

And on a lighter note, joining the Fairy Tail guild as a wizard would be pretty amazing too.

I’m currently reading Sarah J. Mass’ novel, Throne of Glass. I’m not sure why I haven’t read it before now! Perhaps I was hesitant because the description sounded so similar to my own work, (at least in my head it did) and I wanted to have a uniqueness to my writing while I finish book two: Ardent Ascension. But that fear was unfounded! Hogswallop, I say! So far, I absolutely love it!

I’m not sure this is a guilty pleasure, but I’m addicted to sushi. I crave it at least once a week. I also eat more raw cookie dough than I bake actual cookies. Oh! And Bollywood romance movies . . . I blame Netflix.

Considering someone already referred to me as being a unicorn while working at Barnes and Noble . . . “Where’s Bridget? Man, she’s like a magical unicorn you just can never catch sight of . . .” then I’d say a uni—PANTHER. Guenhwyvar, the black panther and Drizzit Do‘Urden’s traveling companion, was one of my favorites in R.A. Salvatore’s Forgotten Realms. And if I’d have the chance to cozy up next to Drizzit . . . I wouldn’t be complaining.

This is a tough one. Lately, I’m a little more hesitant about book to movie adaptations. Books are, for lack of a better explanation, ‘my precious!’. But I believe Eona by Alison Goodman could be a visually interesting and exciting movie for both girls and guys.

Bridget Ladd never quite grew up. She’s most likely to be caught carrying a pocketful of souvenir rocks and shells (to the washer’s dismay) and gets excited over trivial things like colorful ponies and raiding tombs alongside her longtime favorite video game pal, Lara Croft. The smell of freshly turned dirt and the sea air are her favorites, and she isn’t above doing twirling spins barefoot in the grass on a beautiful day in her yard. Her books are her shields and she will admit to having her head in the clouds more times than she probably should . . . but she doesn’t let any of this bother her too much, remembering her favorite quote by Le Guin, and knowing that the creative adult is indeed the child who survived.

She graduated with honors with a Bachelor of Fine Arts in 3D Computer Animation/Interactive Design and minored in Art History at East Carolina University. Living her life solely as an artist and illustrator after school was not enough–knowing that a picture was only worth a thousand words–she felt she needed more. She had to get the trapped stories, the vivid, sometimes adventurous, sometimes terrifying dreams, out of her head. Like the authors, artists, musicians, scientists, peaceful warriors who inspire her, she too wishes to share her worlds with others, let them escape into the unknown. Let them know that like her, it’s okay to be different.

ABOUT The Lotus Effect (Rise of the Ardent) 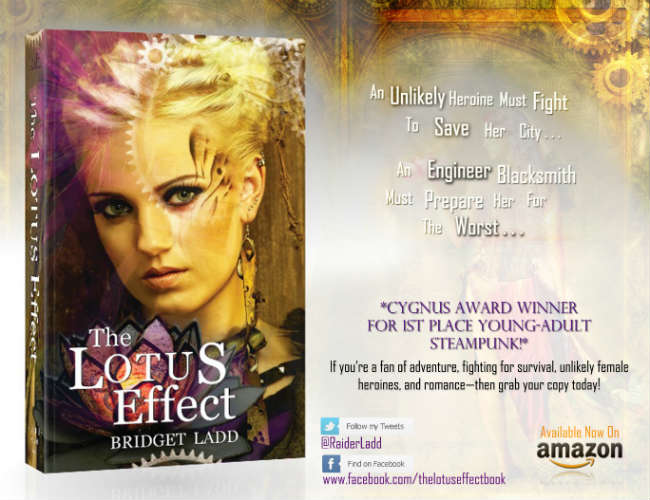 An improbable partnership. An unforgettable love.

Lily Emerson, daughter of the Head of Council and Mistress of Science, has lived a privileged life. It’s Lily’s 18th nameday, the day she is to follow in her mother’s footsteps, becoming the next Mistress of Science—the most powerful woman in all of City Prosper. The Architect and designer of Prosper’s future.

During the night of her Coronation, the corruption of the Council spreads before her . . . opening her eyes to the cruelty that resides in the Council, even within her own parents. Lily realizes now the title of Mistress only comes with superficial power, that to truly save the citizens—she has to fight.

Fight in the Barrage—the mechanical gladiatorial tournament in which one chosen pair of volunteers from each Sector fights, armor-clad and as a team, utilizing unique weapon specialties: the Gatling gun, the Cestus, Klaives, Crescent Knives, mechanically engineered beasts—in the hope to win the right to change the Law. A law that has remained unchanged since its creation almost eighty years ago.

The tournament that Xander, Engineering Blacksmith and Lily’s partner, believes she has no business being in.

But Lily’s different. And she sets out to prove just that.

If you’re a fan of adventure, fighting for survival, unlikely female heroines, and romance—then grab your copy today!

Our romance-themed entertainment site is on a mission to help you find the best period dramas, romance movies, TV shows, and books. Other topics include Jane Austen, Classic Hollywood, TV Couples, Fairy Tales, Romantic Living, Romanticism, and more. We’re damsels not in distress fighting for the all-new optimistic Romantic Revolution. Join us and subscribe. For more information, see our About, Old-Fashioned Romance 101, Modern Romanticism 101, and Romantic Living 101.
By Autumn Topping on October 4th, 2013