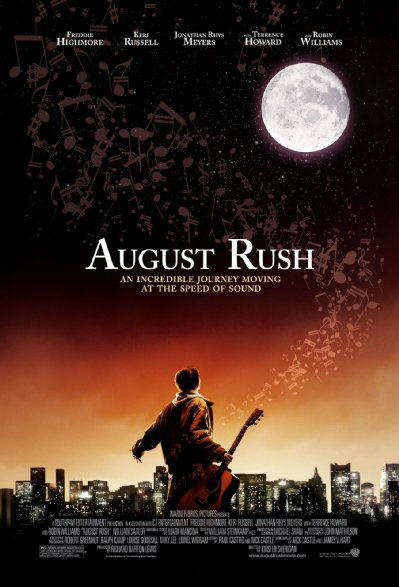 August Rush is directed by Kirsten Sheridan and written by Nick Castle, James V. Hart and Paul Castro. These people, and many more behind the scenes and on camera, work together to create a movie that is not perfect, very popular, or even well known. It is the kind of film that must ask the audience to suspend and then throw their disbelief into oblivion. This is a movie filled with sentimentality but it is the kind with its heart in the right place, though I can understand some viewers might not enjoy it. It is in my opinion that this film is an enjoyable and very sweet fairy tale, especially for music lovers, nonetheless.

August Rush tells the story of an 11 year old orphan boy named Evan Taylor who is musically gifted and decides to run away from the orphanage to New York to find his long lost parents through the power of music. Through a series of flashbacks, the audience gets to see how his parents, an Irish singer-songwriter rocker named Louis Connelly and a classical cellist named Lyla Novacek, met, fell in love, and through circumstances beyond their control are separated. The audience also learns how Evan ended up in an orphanage in the first place.

“I believe in, music the way some people believe in fairy tales.”

The film draws inspiration and elements from many other stories such as Charles Dickens Oliver Twist and Don Bluth’s An American Tail however the film still works as a whole and is still an enjoyable, feel-good story. Even if some may find the story to be a bit too touchy-feely, the film is so sincere with its main character and overall message that I personally did not mind. While I was watching the film for the first time, I truly wanted to see Evan, this determined, gifted child find his parents. I wanted to see the parents find each other as I felt their bond despite it being so brief.

Many of the visuals of the film help illustrate that this film is a fairy tale such as an aerial shot of Evan conducting the music only he can hear while he is in field of wheat and a long shot of New York twinkling in the evening light in a similar fashion to a magical kingdom. Sheridan often uses close-up camera shots and long, silent takes to soak up the atmosphere of the movie or to just allow the audience to be absorbed in the music. One could compare these moments to when Evan becomes absorbed in his music every time he plays. Another element of this film that I personally enjoyed was its surreal edge. The movie would allow for intermittent breaks from the narrative to show visual representations of the music that comes from Evan’s head through the use of surreal special effects and editing.

The characters are all quite likable and each one plays an important role, even the minor characters. Louis has great musical talent as a guitarist, specifically in the rock genre. The audience can see his passion for music clearly in his eyes. He is a young man who longs to find love and for this he is constantly belittled by his brother and the other members of their band. Though he may seem distant at first, once people get to know him he is very warm and caring.

Lyla is also a talented musician, classically trained on the cello. She is part of an orchestra group and plays at lavish concert halls. Through playing such venues, she is satisfying her ambitious father who wants her to excel in her career. She is innocent and very kind but also strong willed and determined. This is demonstrated when she finds out she is pregnant and wants to raise the child with all the love it deserves, despite her father’s feverous objections. Though she cares for her father, she does not want to be controlled by him. Her determination and inner strength is shown in her refusal to stop looking for her son, who she wholeheartedly believes is out there.

Wizard is a street musician who leads and takes care of a band of young street musicians to play for money. Together they live in an abandoned theater. Wizard allows Evan to join his group after he hears Evan play. He simultaneously nurtures Evan’s talent and exploits him. Wizard is the kind of man who knows and appreciates music but he also appreciates the money that is made after every performance of his surrogate kids, especially Evan. Wizard is the one who renames Evan August Rush as a stage name. Wizard wanted Evan to stay with him not just because of the money but also because he thought that if he was taken away and put back in the orphanage then his talent would never be recognized. If Evan did not end up in an orphanage then he would end up in a place better then where Wizard is and he did not want that either. Some may be put off by his odd appearance but personally, I found Wizard to be a rather interesting character.

Evan also known as August Rush is the music prodigy who can hear music all around him, “in the wind, the air, and the light.” He is very determined as well as wide eyed and optimistic. When it comes to music, Evan hyper-focuses and has great stamina. His ability to feel the musical notes invoke within the audience a hopeful mood. In the orphanage he is considered a freak and is not very well liked among his peers. Despite that however, he still shows kindness to everyone he comes in contact with. Though not many people can relate to his masterful musical talent people can relate to his fundamental belief that music has and always will be heard by someone. Evan believes that his parents will hear his music and they will be able to find him. I personally really liked Evan and found him to be an enjoyable character to follow, especially when he is creating music. When he creates, he is both at his most joyful and most hopeful. I felt sympathy for him and I wanted to see him succeed in his goals.

The minor characters from Evan’s social worker to a Priest, all have a purpose to the story and each one fulfills their roles nicely. The characters may not have layers upon layers of depth or complexity, but they are still enjoyable to watch and cheer for.

The music plays a key role in this film. It helps tell the story and invoke emotions. Louis and Lyla met through music and bonded over music. Evan uses music to find them and form connections with other people. The film’s composer is Mark Mancini and in my opinion the amount of effort and dedication he put into the score really shows. He uses fundamental tones and overtones to create natural and organic sound, which is the basis for the entire film score. The end result is a musical score that seems to connect all humans to each other as well as being the perfect match for the film. The music is used beautifully to match each emotion felt by the characters, each tone of a scene and each peaceful moment of atmosphere. The music changes from fast paced rhythms to slow, swelling piano instrumentals that capture the emotion effectively.

There are so many memorable scenes involving the music being played by the characters, often with little to no dialogue. For instance, near the beginning of the film the audience witnesses alternating cuts of Louis’ rock band music and Lyla’s orchestral music. The sharp contrast between the two styles is made clear but then integrates together thus creating beautiful melodies.

Another memorable scene happens later on in the film when Louis is face to face with his son and neither one of them realizing it. They sit in the park, briefly admiring each others’ guitars and talent before they play together. As they play, they become perfectly in sync and develop a mutual respect and admiration for each other. My reaction to this scene was barely contained joy and a sense of tension as I wanted to just shout out the truth to them.

August Rush is a film I would recommend to anyone who enjoys music, younger children, or anyone in need of a film to help make them feel better after a bad day. August Rush reminds us of the universal language that is music, how it connects all of us, and helps us discover the love that binds us together.

Our romance-themed entertainment site is on a mission to help you find the best period dramas, romance movies, TV shows, and books. Other topics include Jane Austen, Classic Hollywood, TV Couples, Fairy Tales, Romantic Living, Romanticism, and more. We’re damsels not in distress fighting for the all-new optimistic Romantic Revolution. Join us and subscribe. For more information, see our About, Old-Fashioned Romance 101, Modern Romanticism 101, and Romantic Living 101.
Pin this article to read later! And make sure to follow us on Pinterest.
By Moriah Burbank on May 23rd, 2015