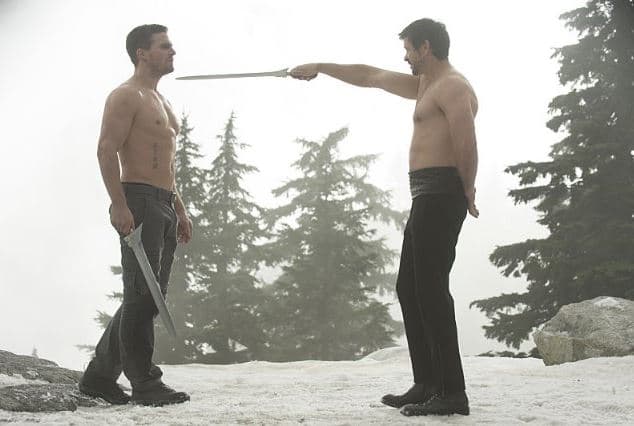 When I heard the episode was going to end on a cliffhanger, who could have guessed it would be this literal of a cliffhanger? Oliver Queen, the hero of the show, dead? Well, I will get there in a moment. In an episode with 3 different timelines, there’s definitely a lot to talk about in this weeks Arrow – The Climb Recap… 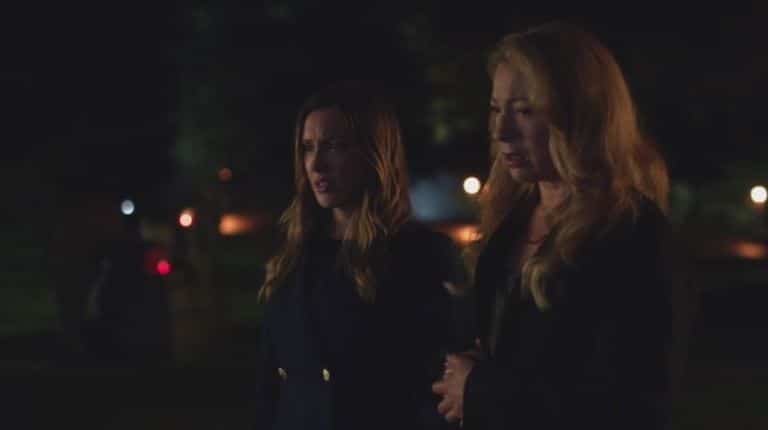 Separate from the rest of the episode, Laurel faces more of her own demons. While standing in front of Sara’s grave, Thea overhears (the irony) and wonders why because Sara is no longer dead. Not being able to keep it inside, Laurel confesses that Sara’s dead, but that Thea needs to keep it a secret. This secret unravels more when her mother Dinah arrives for the Holidays.

Mother’s intuition in full gear, Dinah asks Laurel about Sara but Laurel just says she’s traveling and being Sara. While Detective Lance failed to notice the brokenness of Laurel on this question, her mother certainly didn’t. A mother notices these things after all. Once alone, Dinah confronts Laurel by telling her that when Sara was “dead” before, she knew instinctively she would see her again. That feeling was gone. Knowing she has no choice, Laurel tells her mother the truth about Sara’s death. She also tells her mother that they can’t tell Quentin because it would break him.

Later, in front of Sara’s grave, Laurel promises her mother that she will find Sara’s killer and make the killer suffer. Dinah, with rage of her own, agrees with Laurel full heartedly, saying, “Make them pay, and make them suffer.” Could this mean that Laurel will kill Merlyn, getting justice for Sara and Tommy? Only time will tell.

A Virus and a Kidnapping 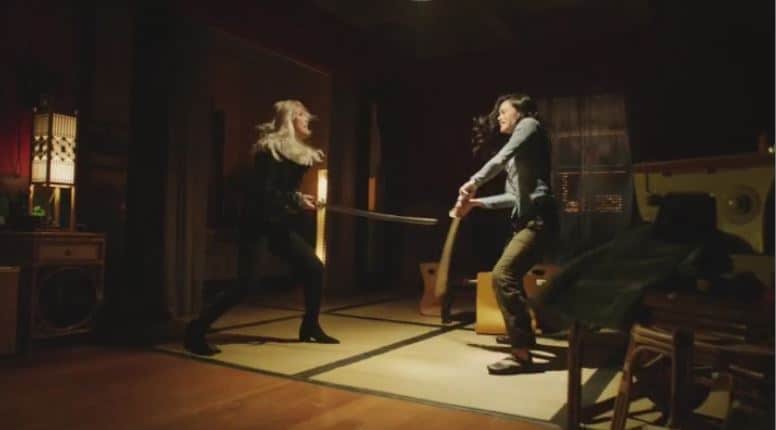 Back in the Hong Kong flashbacks, Oliver and Maseo attempt to stop a virus, Oliver now able to torture along the way. While they torture someone with important information, China White breaks into Tatsu and Maseo’s home. They fight it out, Tatsu attempting to protect her son. By the time Oliver and Maseo arrive, it’s too late. Maseo’s son said that the woman with white hair took her. Back in present day, Oliver realizes Maseo is part of the league of assassins with apparently nothing left. One can only wonder – what happened to his family? 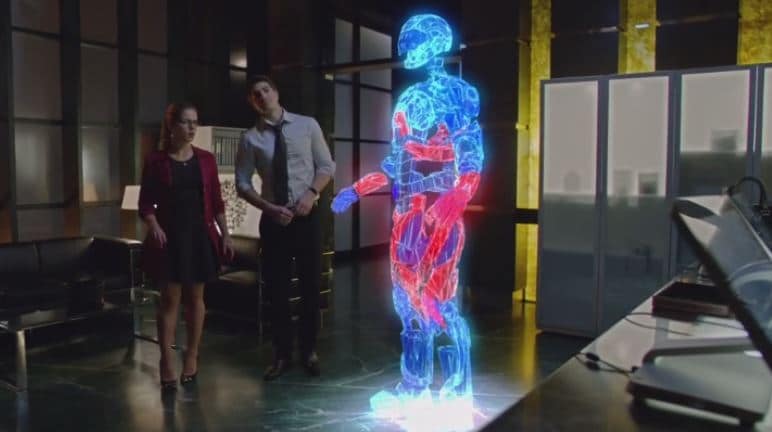 Things are now a little awkward between Ray and Felicity (after Ray walked away from their kiss); so, Ray attempts to tell Felicity why he walked away. After tracking Felicity down at the club, Ray confesses that he felt guilty kissing her, not because he was cheating but because the last woman he kissed was his fiancée Anna. Turns out that during the Mirakuru attack, Ray and his fiancée were attacked. While Ray only got his leg broken, he had to watch as these horrible men snapped his fiancée’s neck.

This truth brings Ray and Felicity closer (Ray not sorry about kissing her), but Felicity wants even more truth about what he’s up to. Tell her or she’ll walk. Instead of telling her, Ray decides to show her the A.T.O.M. suit design. What’s he going to use it for? Ray says, to “protect the people of the city,” and he wants Felicity’s help. This girl is clearly a hero magnet. 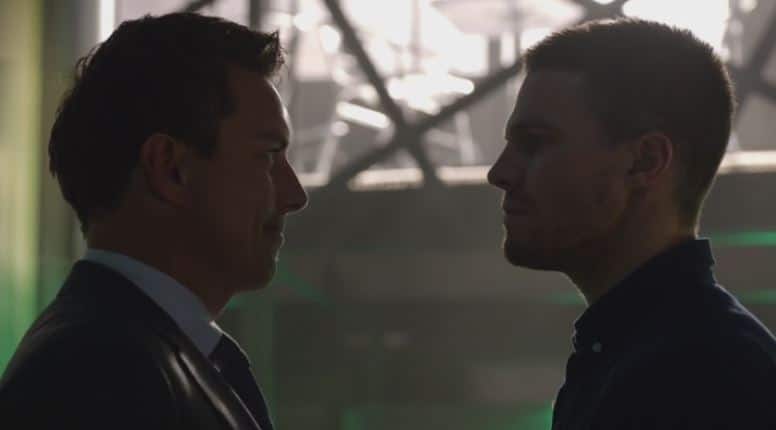 After gifting Captain Lance with a criminal, Oliver gets attacked by The League of Assassins. Time has run out for Oliver to find Sara’s killer. Either he brings them Sara’s killer in 48 hours, or they start killing innocents in Starling City. Who is the assassin? Maseo it seems is now a part of the League.

Time running out, Team Arrow works fast to discover who Sara’s killer is. When Felicity runs the DNA sample against the police database, she comes up with one match: Oliver Queen. They know Oliver isn’t the killer, so what is going on? Oliver decides that clearly Malcolm set him up and put his DNA there. Turns out he isn’t that far off.

The team uncovers that Malcolm was indeed there in Starling City the night before Sara died. When they watch video footage, they see Malcolm getting off the plane followed by Thea. Thea’s own lies, in her interesting quest for truth, start to unravel. Diggle, Roy, and Felicity all believe that Thea could be the killer and that’s why Oliver’s DNA matched, but Oliver can’t believe that about his own sister.

To find out, Oliver addresses Thea as the Arrow (Felicity’s idea). She doesn’t look very innocent when she turns into a trained fighter, says to stay away from her father, and escapes. In shock by Thea’s behavior, Oliver is confronted by Malcolm Merlyn, Malcolm knowing that Oliver attacked his own sister. He knows the truth about Sara has come to light, his plan all coming into place.

Oliver, angry and loving brother that he is, wants to kill Malcolm but Malcolm says he can’t because of Thea. He tells Oliver to check his phone. Malcolm, being the worst father on the planet, shows Oliver the taped evidence of Thea killing Sara. 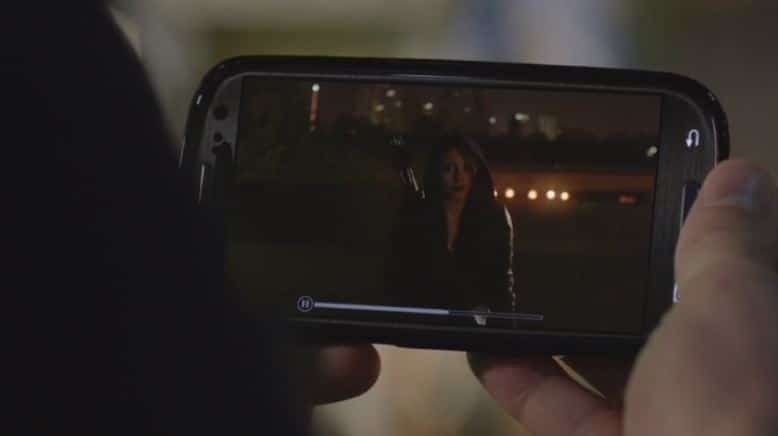 Malcolm knows that Oliver won’t want the League to see this tape because they’ll kill Thea. Oliver still believes Thea didn’t really do it. He’s right, Malcolm using a drug of suggestion (one that grows in Corto Maltese) to get Thea to do his bidding. Thea wouldn’t even have a memory of her actions.

Malcolm claims he didn’t do this to give Thea a death sentence, but to give Oliver incentive. Tell Ra’s he (Oliver) killed Sara and by right he would be given a trial by combat with Ra’s. Kill Ra’s Al Ghul and all blood debts would be forgiven, including Malcolm’s and Thea’s.  While entertaining, Malcolm really is a nasty piece of work. Oliver should have just let Nyssa kill him when they had the chance (of course that means John Barrowman wouldn’t be on the show, so I guess it was for the best). 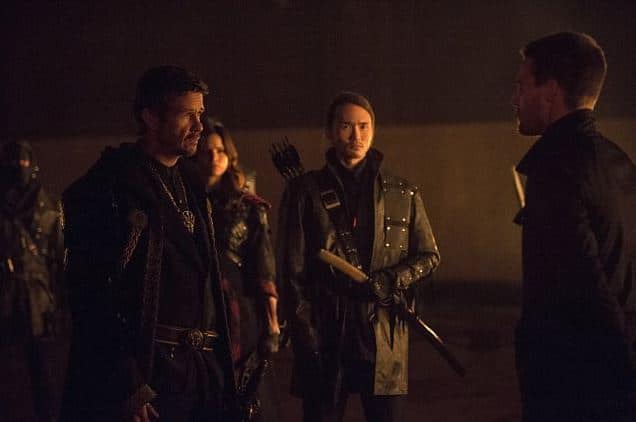 Knowing that he has no other choice, Oliver decides to tell the League he killed Sara. He confesses to them he’s the killer, and Nyssa doesn’t understand why he would kill someone he loves. Oliver claims he did it because Sara asked him to, saying he wants trial by combat. They agree, giving Oliver 13 hours to say his goodbyes. 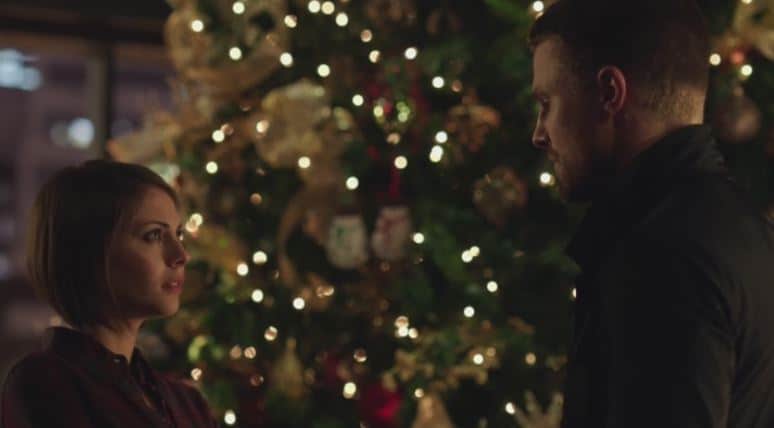 First, he says goodbye to an oblivious Thea (who he tries to tell one last time that Malcolm can’t be trusted) and then to his team (kind of an ouch that Oliver didn’t say goodbye to Laurel). When Felicity walks in to see Oliver saying goodbye, she just says “no.” Deep down, they all know Oliver doesn’t have much of a chance at all. Diggle tells Roy to give the two a minute. 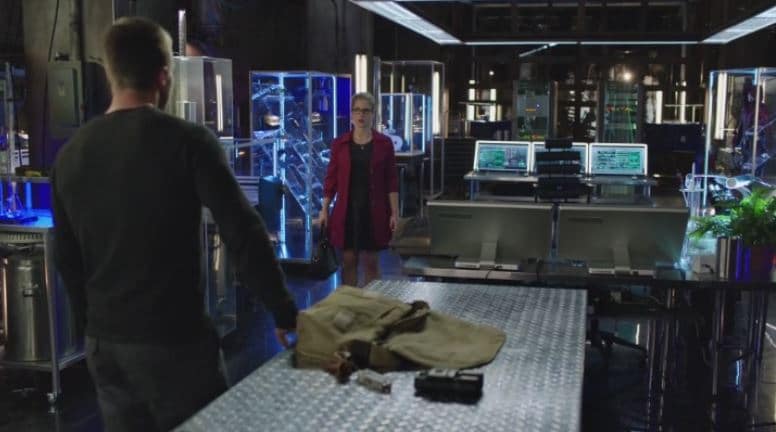 “You’re going?” She accuses. Oliver tells her that he’ll go, Thea will be safe, and that he would be back. Felicity wishes he “sounded more convincing.” She wants to ask him to say, but she knows he wouldn’t listen. Instead, Felicity asks him to do the one thing he stopped doing: kill. She doesn’t want his humanity to get in the way of him living. He needs to kill Ra’s Al Ghul without hesitation. Before she asks him to do this, Oliver says that he will do what she says because it was Felicity asking. The tenderness between the two really has deepened. 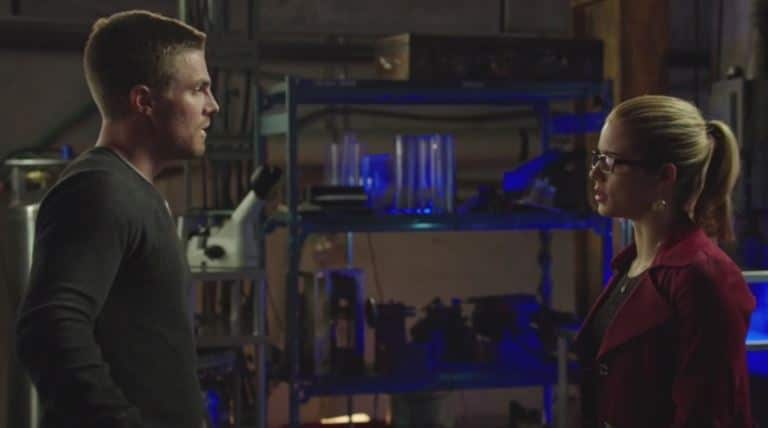 Oliver admits he doesn’t know if he’s a killer anymore, but there are two things he does know: “But I do know two things– the first is that… whoever I am, I am someone that will do whatever–whatever– it takes to save my sister.” He follows this proclamation with a romantic and gentle kiss to Felicity’s forehead. 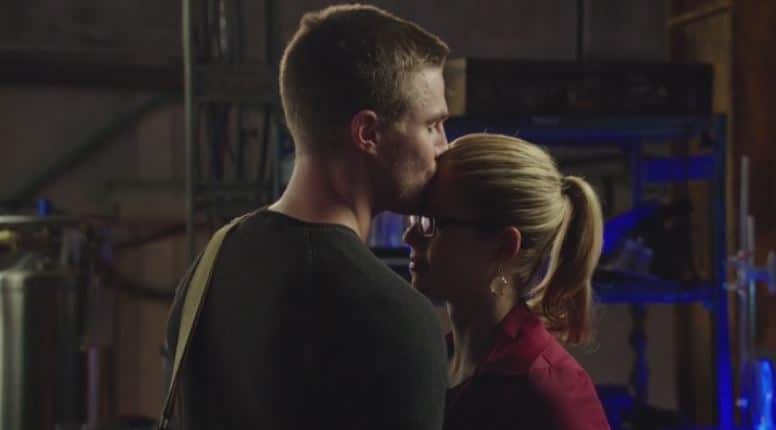 Then he starts to walk away, but before he goes, Felicity asks, “And the second thing?” 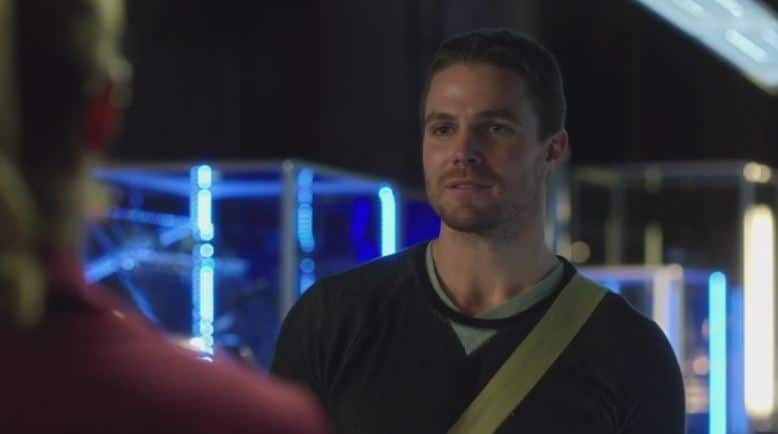 Oliver pauses, but says with full emotion on what may be the last time he sees her: “I love you.” 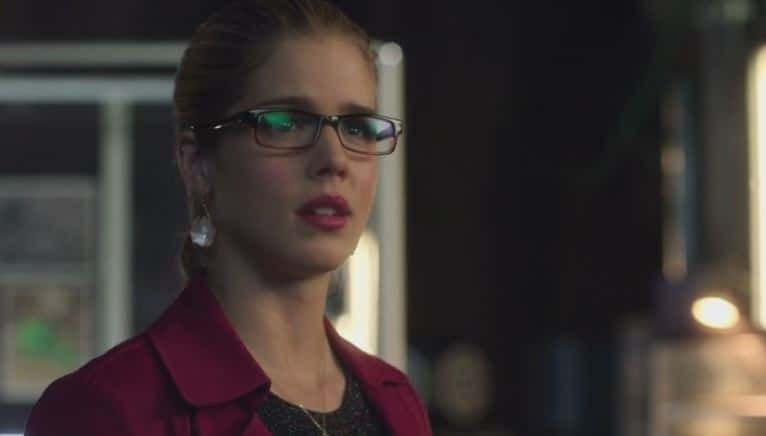 As Oliver leaves, Felicity standing there alone, the story switches back to the mountain, Oliver’s climb at an end. After interspersing the climb throughout the episode, it was time for Oliver to face the demon: to kill Ra’s Al Ghul. 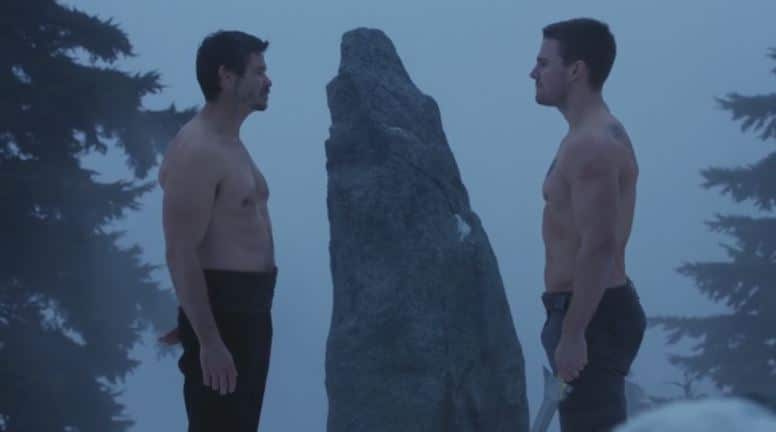 Now, I have to admit that I was slightly underwhelmed in Ra’s Al Ghul’s first appearance. This episode makes up for that. Ra’s is intimidating, menacing, and fights like everyone around him are gnats to easily be squatted. Oliver never did have a chance… 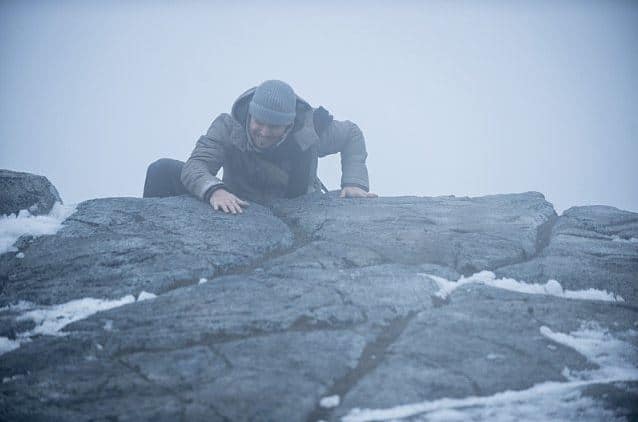 After Oliver makes it to the top, Maseo (who clearly still cares about Oliver) offers Oliver one last chance to back out, but Oliver won’t take it. He will do anything to save his sister. They have him choose his weapons (Nyssa noting that she’s almost jealous of Oliver because he’ll see Sara again before she does). The trial by combat begins. Oliver fights with everything he has, but next to Ra’s Al Ghul, he looks weak and untrained. While Oliver risked everything for Thea, his incentive wasn’t enough to physically take on Ra’s Al Ghul (who went in without a weapon).

Oliver seems to have one shining moment where he overtakes Ra’s but the moment doesn’t last long and Oliver quickly  loses. “Don’t be afraid my son,” Ra’s tells Oliver. “Death comes for us all.” Then, Ra’s thrusts his sword into Oliver in one of the most shocking moments of the show. 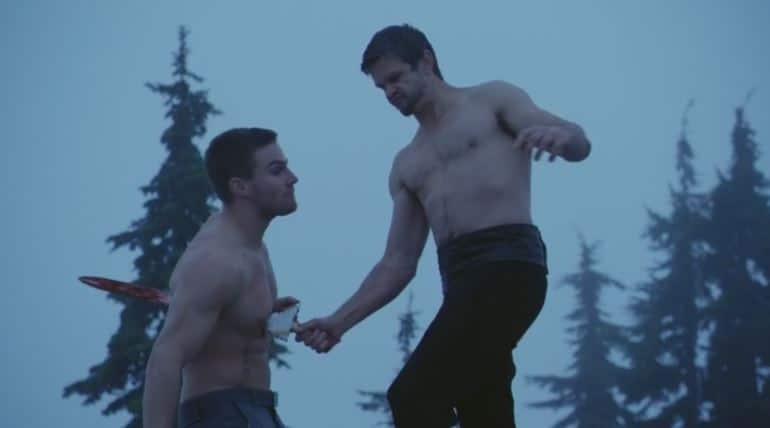 As Oliver begins to die, he looks back on four things in his life: his father, his mother, Thea, and lastly, Felicity. 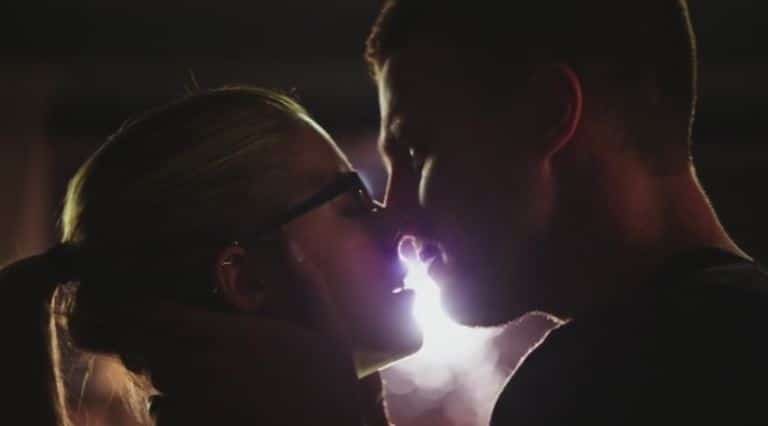 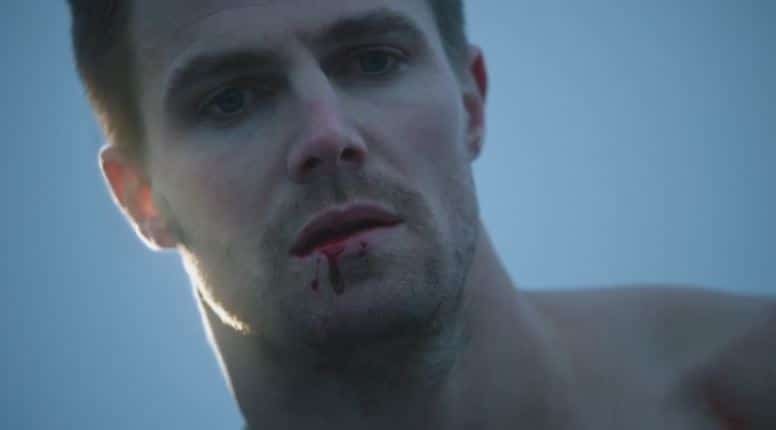 During this moment of stillness, Ra’s Al Ghul finishes the deed by pushing Oliver off the cliff. 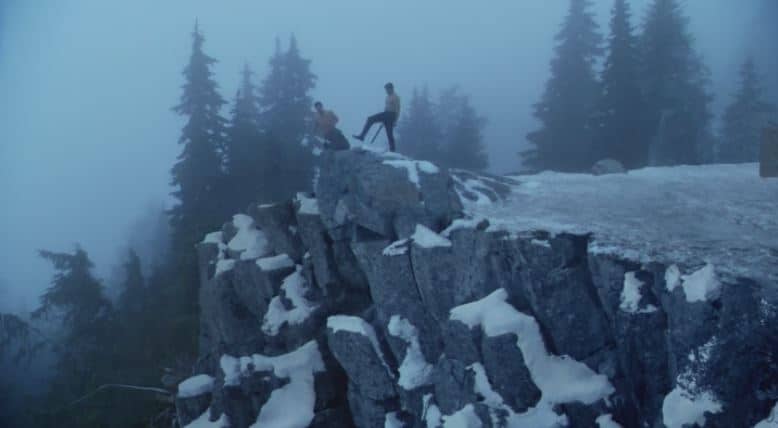 Aside from Oliver telling Felicity he loves her…. 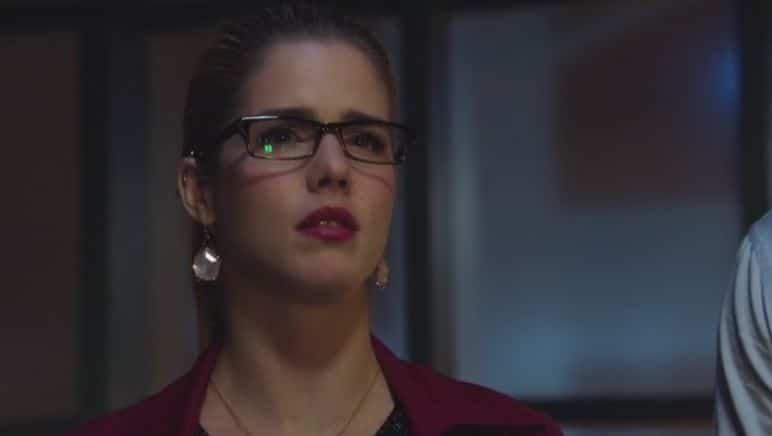 Felicity: Why does this keep happening to me?

With Oliver seemingly “dead,” how will he come back? Will they use the Lazarus Pit? Or is he miraculously still alive because someone will save him?

How will the rest of Team Arrow, Thea, and Oliver react when he doesn’t return? How about Laurel since she didn’t even know he left?

What did you think of “The Climb?” Did you love Oliver’s declaration of love (I know I did)? Were you shocked with the show’s literal cliffhanger? Sound off in the comments…

Stay tuned in January for my next Arrow Recap.

Our romance-themed entertainment site is on a mission to help you find the best period dramas, romance movies, TV shows, and books. Other topics include Jane Austen, Classic Hollywood, TV Couples, Fairy Tales, Romantic Living, Romanticism, and more. We’re damsels not in distress fighting for the all-new optimistic Romantic Revolution. Join us and subscribe. For more information, see our About, Old-Fashioned Romance 101, Modern Romanticism 101, and Romantic Living 101.
Pin this article to read later! And make sure to follow us on Pinterest.
By Autumn Topping on December 11th, 2014