After this week of Arrow, I came to the very clear realization that Oliver and Felicity should never break up as a couple. Together, the angst-free relationship is a breath of fresh air thanks to their humor and all their cuteness. Breaking them up at this point would be as contrived (just think of Luke and Lorelai), as it would have been for Chuck and Sarah once they finally became a couple. Just saying! Here’s hoping the writers never go down that path (and never go down the path of putting Felicity in that grave either) because fern giving and lunch making Oliver is all kinds of adorable. Their banter back and forth over the intercom about a codename was also a major highlight of  the latest episode, “The Candidate.”

Aside from Olicity, a friend of Moira Queen, Jessica Danforth (played by Jeri Ryan), attempts to run for mayor (despite all the recent leadership deaths), Thea begins showing Lazarus Pit side effects, and Felicity faces a major problem as the President of Palmer Tech.

Her first day back at work (in person that is), she faces a huge dilemma: the company is suffering so the board thinks the best thing to do is to cut people’s jobs (rather than their own bonuses). Felicity isn’t too excited about this development (as no one wants to be the bad guy).

In the meeting, Felicity meets Curtis Holt, the man responsible for an algorithm that figured out who should be cut (something the board forced him to do), his own name ending up on the list. In a sense, he sort of fired himself. This doesn’t sit well with Felicity so she hatches a plan. She hires everyone back because it is what Ray would have done and tells the board that Curtis has an invention that will change everything for the company. They give her six months. Something tells me this timeline will become important. Overall, this plot point mostly served to introduce Curtis. I’m not sure how I feel about him just yet, but only time will tell.

With no leadership in Star City, Jessica Danforth stands up, hoping for support from Oliver and Thea. They try to warn her off, but she won’t hear it. As she announces her intention to run live, a gun goes off. Luckily, Oliver and Thea were there to protect Jessica and her daughter from Lonnie Machin, aka Anarky, who was trying to prove himself to Damien Darhk. Damien Darhk isn’t so impressed with his messiness, however.

Now in protective custody, somehow Jessica still thinks it’s a good idea for her daughter to go to the library. The daughter, of course, gets kidnapped as Lonnie continues to try and impress Darhk. The interaction between Damien and Lonnie was priceless. With suavity and power, Darhk looks at Lonnie like an annoying bug that must be squashed. There’s a code to be followed after all and Lonnie failed miserably. I’m really loving him as the villain this season! He’s much, much, much better than Ra’s Al Ghul…

Working as a team, and with Lance’s help of a location (that was secretly given to him by Darhk), Oliver and company take down Lonnie and rescue the girl. In the process, Oliver witnesses firsthand how dark Thea has become as she burns Lonnie alive. This does nothing to prove to Lance that Oliver has changed at all.

But Oliver has changed and he agrees with Lance that someone needs to come out into the light and give hope to the city. With Jessica deciding she will no longer run for mayor (and who can blame her), Oliver tells Felicity that he’s going to take it on; he’s going to run for mayor! Apparently, this is a plot from the comics so it should be interesting to see where it goes.

The Lazarus Pit and Laurel’s Choice

After seeing Oliver and Thea duke it out, the entire team (including Laurel) find out about the consequences of the Lazarus Pit. Something isn’t quite right with Thea. Her actions are getting more and more aggressive.

This aggression doesn’t stop Laurel once she discovers the truth that Thea was practically brought back from the dead. Secretly, she plans with Thea to go to Nanda Parbat (saying they are going to a spa) and bring Sara back from the dead. Seeing Sara in her grave was quite a grotesque image and proves that Laurel will do anything for her sister, no matter the consequences.

Somehow, this development will also lead to Constantine’s arrival (can’t wait for this one!). 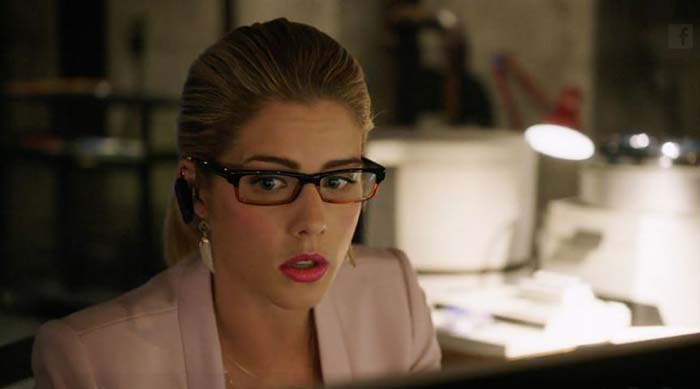 Oliver: Get Diggle down here to handle the dismantling.

Felicity: You know it seems like he could use a code name too. 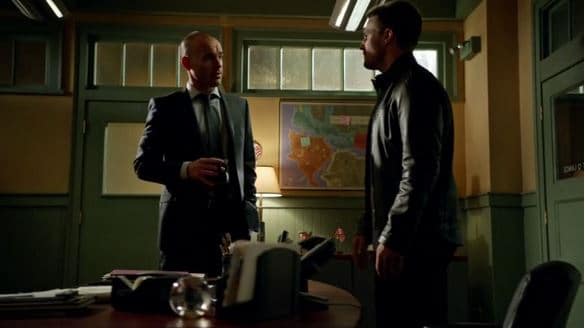 Detective Lance (with his perfect dry sarcasm): Sure, ‘cause you got a new name. With a color. Green Arrow. Catchy.

What did you think of The Candidate? Do you love the idea of Mayor Oliver? Do you like Oliver and Felicity as a couple? What do you think of Laurel’s dark choice? Sound off in the comments…

Our romance-themed entertainment site is on a mission to help you find the best period dramas, romance movies, TV shows, and books. Other topics include Jane Austen, Classic Hollywood, TV Couples, Fairy Tales, Romantic Living, Romanticism, and more. We’re damsels not in distress fighting for the all-new optimistic Romantic Revolution. Join us and subscribe. For more information, see our About, Old-Fashioned Romance 101, Modern Romanticism 101, and Romantic Living 101.
Pin this article to read later! And make sure to follow us on Pinterest.
By Autumn Topping on October 15th, 2015