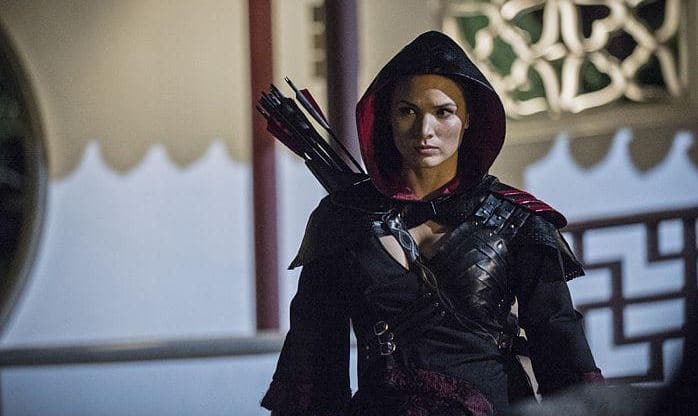 This week on Arrow, the show follows the return of Nyssa as she exacts revenge on who she believes killed her beloved: Malcolm Merlyn. In a Felicity light episode and too much time spent in the foundry debating over whether to kill Malcolm, I have to admit that I was slightly disappointed with “The Magician” overall. While I liked it, this has to be my least favorite episode of the season thus far… 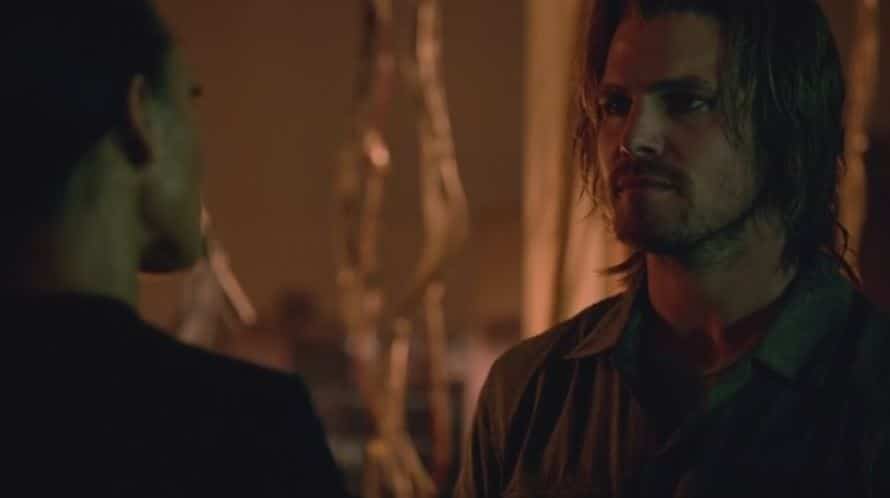 In a Division, Nikita esque flashback, Oliver is ordered by Amanda Waller to murder a man he doesn’t know. He questions it, but still follows through with the order. Maseo’s family is in danger after all. Still, that doesn’t stop Oliver from doing a little research of his own and confronting Waller about doing her dirty work. He then discovers that Waller was the one who tricked Fyers into almost shooting down the Ferris Air flight back from season one, thus framing Lian Yu and killing him in the process. Originally, we and Oliver thought this was all about ruining the Chinese economy. As it turns out, Waller was attempting to kill one passenger on the plane: Chien Na Wei. Now she’s in Hong Kong and wants to know why.

Nyssa’s Revenge and Standout Romantic Moment of the Week 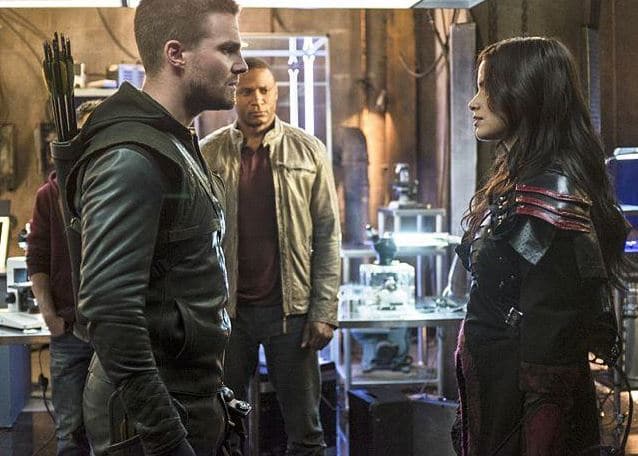 Back in present day, Nyssa confronts Oliver about Sara’s disappearance. He tells Nyssa the truth, that Sara was dead. She’s not surprised Sara died by Arrows, soon revealing Malcolm Merlyn was still alive. Sara, as it turned out, had returned to Starling City to observe Merlyn (and also had turned to her father for help). In an obvious red herring in the murder mystery, the Arrow team in an uncomfortable (and short lived) alliance with Nyssa, track Malcolm down and exact revenge on Sara’s supposed killer.

They find Malcolm, but he easily gets away. Oliver, however, shot him with a tracker. Going on his own (so Nyssa wouldn’t kill Malcolm on sight), he reaches his destination only to realize he had been out played. Malcolm gives Oliver a call so they can meet in a public place. Once there, Malcolm claims he didn’t kill Sara. Why would he murder the beloved of Ra’s Al Ghul’s daughter? He then swears on Thea’s life, convincing Oliver he didn’t in fact do it. That of course doesn’t rule out Thea or Malcolm for that matter as he is a brilliant liar… 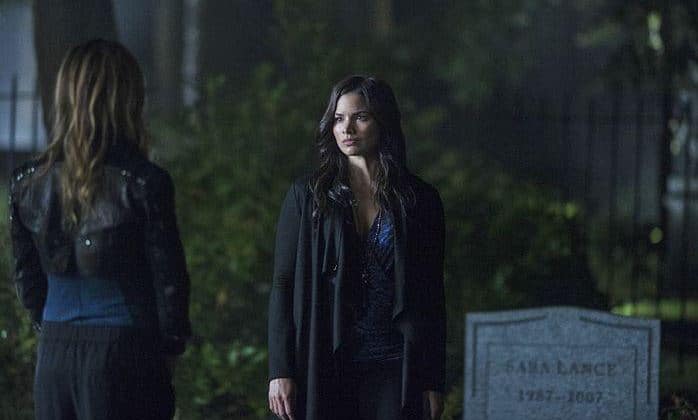 Upon returning to the foundry, Nyssa wants to know who Malcolm’s daughter is. Oliver tells her it’s his sister Thea, putting Nyssa on a new plan to take out who she believes is Sara’s killer. While there wasn’t much romantic in this episode to select a romantic moment, I couldn’t help but be absorbed in Nyssa’s need for revenge, her actions very reminiscent of Byronic Heroes. What I think we might have here is a Byronic woman and that’s intriguing. Losing her beloved, Nyssa will do anything to avenge her past lover. Anything. And on this note, she and Laurel agree. They both want Sara’s killer dead, neither one stopping to consider that Malcolm might not have done it.

To exact her revenge, Nyssa kidnaps Thea in order to take down Malcolm. Her scheme doesn’t turn out as planned, however, because Oliver won’t let her. Not only is Malcolm Thea’s father, Oliver also doesn’t believe Malcolm is the killer, Malcolm even implying that Nyssa’s father might have made the hit. Oliver’s motives are a little questionable at best, considering Malcolm is responsible for countless deaths including Tommy’s, but whatever…By the end of the episode, Oliver tells Nyssa that Malcolm is under his protection until he finds Sara’s killer. Nyssa, on the other hand, tells Oliver he’s made an unfortunate enemy with the League of Assassins. Perhaps this wasn’t the smartest move on Oliver’s part. Nevertheless, I like that Oliver is consciously choosing not to be a killer. One of the most interesting parts of the episode comes down to Thea’s ability to lie. When confronted by Oliver about Malcolm, she acts surprised, with just a touch of coldness behind the eyes. For someone who wants the truth from everyone else, she certainly has no qualms in hiding the truth from others. Even her time with Roy felt calculated. She pretended to be like her past self, even offering Roy a job as assistant manager. In the midst of being kidnapped, she doesn’t give Oliver an inkling she knows what was going down. Trouble is definitely on the way for Thea and her twisted relationship with her father. 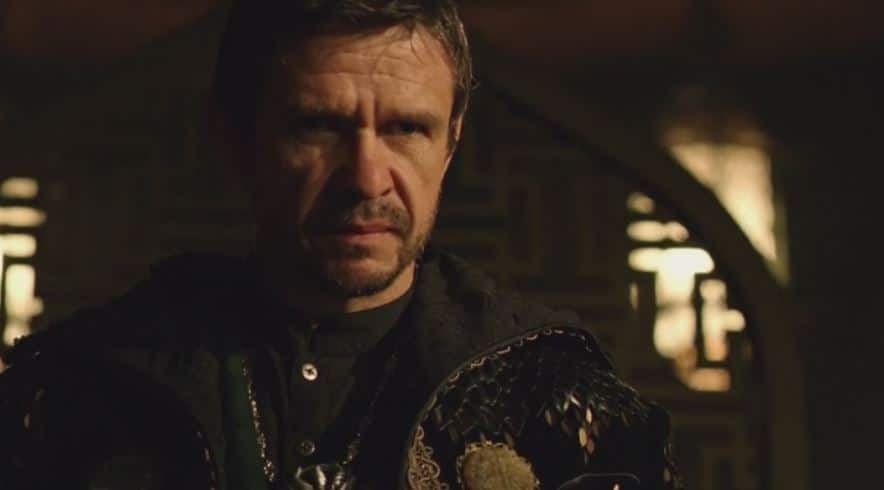 Nyssa returns to the League of Assassins, confessing to her father Ra’s that Sara was dead and Malcolm indeed alive. Ra’s seemed to confirm the seeds of doubt he planted in Nyssa about Sara when he claimed Sara had never truly been one of them. Hmm. Makes you wonder if he did have something to do with Sara’s death? Will Nyssa turn on him when she finds out? Nyssa also tells Ra’s that Oliver is now their enemy. Uh oh. 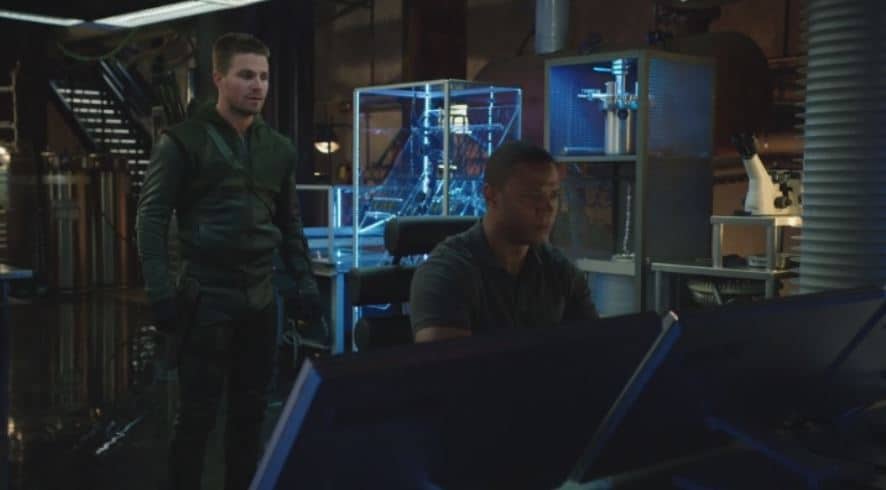 Oliver: “She told me an idiot could run it.”

Diggle: “I will try very hard not to take that personally.”

With Captain Lance leaving a message on Sara’s voicemail, anyone think he’ll figure out the truth before Laurel tells him? I really hate they’re keeping him in the dark.

With another annoying mention of Laurel’s (once Sara’s) jacket, can we just move on and instead focus on Laurel’s transition? Also, anyone kind of surprised at how dark Laurel is already?

Who else is ready for Felicity’s return on Arrow next week? I really feel like the episode lost a little momentum without any lightness and fun.

Anyone let down by Ra’s Al Ghul’s supposedly epic entrance? I thought his reveal was sort of underwhelming…

What did you think of “The Magician?” Sound off in the comments…

Stay tuned for next week when I recap “The Secret Origin of Felicity Smoak.”

Our romance-themed entertainment site is on a mission to help you find the best period dramas, romance movies, TV shows, and books. Other topics include Jane Austen, Classic Hollywood, TV Couples, Fairy Tales, Romantic Living, Romanticism, and more. We’re damsels not in distress fighting for the all-new optimistic Romantic Revolution. Join us and subscribe. For more information, see our About, Old-Fashioned Romance 101, Modern Romanticism 101, and Romantic Living 101.
Pin this article to read later! And make sure to follow us on Pinterest.
By Autumn Topping on October 30th, 2014