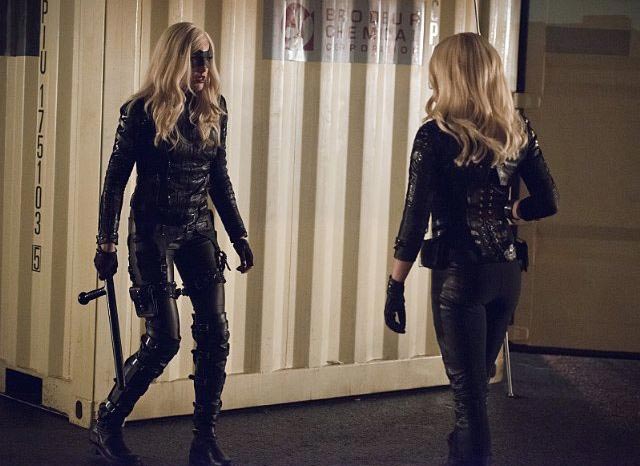 I’m just going to come out and say it: I liked but did not entirely love the latest episode of Arrow. There were moments I appreciated, and I still was entertained overall, but several plots and character turns were kind of a letdown to be honest. This was not Arrow’s strongest outing. Not by a long shot. In an episode called “Canaries,” I was surprised by how little the show focused on Laurel versus Sara. And on that note… 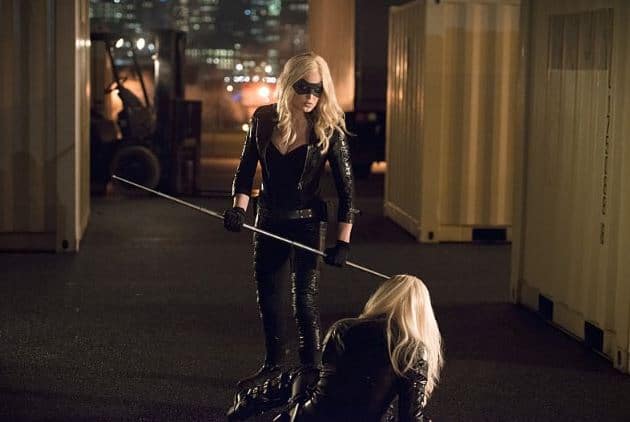 The episode opened in the midst of a drug induced vertigo attack. The victim? Laurel Lance, her hallucinations causing Laurel to think Sara was accusing her of being a fraud and an addict. The big question on faux Sara’s mind: why are you trying to be me? The theme of Laurel becoming Sara plays out for the rest of the episode. Personally, I’m glad this problem was addressed. I’ve always disliked the idea of someone taking over someone else’s identity. Why not create your own identity? Thankfully, this too gets addressed later on; sort of.

48 hours earlier than this fight, Oliver and Roy are back fighting crime together. Laurel as the new canary jumps into the action as well. Oliver is not happy, grabbing her and pulling her to the side. He thinks her behavior is foolish and will end up getting her killed. He later even confronts Laurel in his bossy kind of way, accusing her of becoming the Canary for a drug induced sort of high. She is an addict after all. Kind of a low blow on Oliver’s part and of course Laurel then just tells him to “go to hell.” It was nice to see the rest of Team Arrow stand up for Laurel. She is her own woman after all. She makes her own choices, even if some are imperfect.

To be fair, however, Laurel really isn’t ready to go out in the field and I do think the writers are moving her development along rather too quickly. She wasn’t ready to face Vertigo….And speaking of Vertigo, he escapes (Laurel getting a nice punch in of the marshal though for the world to see) with some kind of plan to release more drugs. I think. One of the biggest weaknesses of the episode comes down to the villain’s story being incoherent and boring. His only purpose was to get Laurel drugged. Not an extremely exciting choice.

When Laurel goes off to fight him alone (bad idea to begin with), she gets hit in the neck with the drug. Thus begins a face-off between sisters. The action sequences were less than what they should be and an anticlimax from prior Canary fights. This should have been epic. It wasn’t. Soon after getting beat to a pulp by Vertigo, Oliver saves her and takes her to the foundry.

Laurel begins to have doubts about her choice to wear her sister’s jacket, but Felicity gives her a heart to heart, encouraging Laurel to find her own identity. Stop trying to become her sister and recognize the light within her, a light Sara never had (perhaps a little over the top as I think Sara had as much potential for light as Oliver…).

In Laurel’s second fight against Vertigo (Oliver needing Laurel as a second since Roy was out), she gets drugged again. This time, she not only hallucinates Sara, but her father as well. She imagines Quentin berating her for not telling him the truth about her own sister’s death. When ‘Sara’ once again accuses Laurel of taking her place, Laurel suddenly gets a rush of adrenaline, saying that she’s done trying to be her. She’s ready to be her own identity. Once this decision is made, she is able to fight off the new Vertigo and punch him till he’s out, Sara smiling down on Laurel for her choice. Although I liked the idea of accepting one’s own identity, I’m not sure I see what Laurel’s unique identity is aside from her sister. Hopefully, this will become more clarified in future episodes.

For me, the most effective element of Laurel’s journey came down to the Quentin confrontation (including the drug induced Quentin hallucinations). Her epiphany leads her to finally tell her father the truth in the most heartbreaking moment of the episode. When Quentin cries out, “not again,” Paul Blackthorne really pulled out all the stops in his performance. Personally, I’m just glad they didn’t have him have a melodramatic heart attack. Huge sigh of relief that Captain Lance finally knows the truth and can finally mourn.

By the end of the episode, Oliver seems to completely accept Laurel as part of the team. 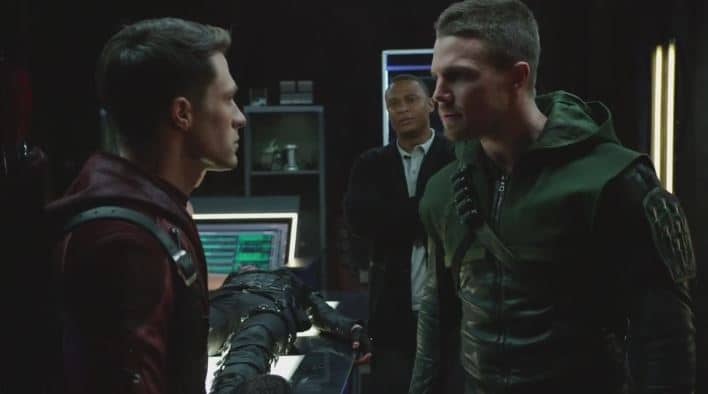 After having been “dead” and gone for a while, Team Arrow isn’t what it once was: as in they no longer follow Oliver’s orders to a tee. When Roy stands up to Oliver about Thea, it truly revealed this transformation. The Arrow cave has become much more diplomatic, Felicity agreeing with Roy, proclaiming their independence from the past. While it was all kinds of harsh to Oliver, they did need to say what they did. Things aren’t just going to go back to the way things were. Oliver leaves upset, and Diggle follows, asking Oliver if he can live with the changes? By the end of the episode, when he accepts Laurel, I think he just might have. On a side note, it’s hard to see things so cold between Oliver and Felicity. 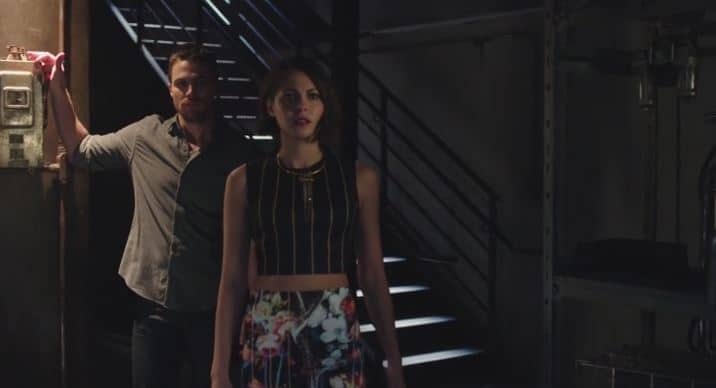 One of the nicest moments of the episode is when Oliver reveals the truth to Thea: that he is in fact the Arrow. Instead of having another tirade about him lying, she is thankful to know that Oliver wasn’t flaky in the past, that he was out saving people (sometimes her even). She accepts Oliver wholeheartedly, but in the process loses all her trust in Malcolm. It seems him lying about Oliver’s identity is the last straw… as opposed to all the people he murdered in the past.

While I’m glad that she no longer trusts Malcolm, I’m not sure I bought her complete and sudden change of mind and transformation, especially since she still doesn’t know about what he actually did to her (i.e. brainwashing her into killing Sara). It was just odd to be honest. Still, this mistrust and new revelation about her own brother will protect her in the long run. The three have to work together to stop Ra’s Al Ghul. First order of business? Oliver brings Thea to the island. I can’t wait for next week with Slade’s return! 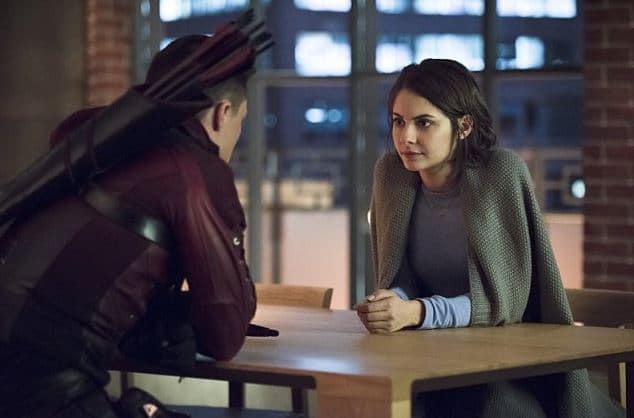 This week was all about Roy and Thea. After Thea gets upset about Malcolm, she needs to find something simple so she decides to go sleep with the DJ Chase. Unfortunately for her, she doesn’t realize Chase is Ra’s spy. After they sleep together (too bad it wasn’t before…), he offers her some red wine. Thankfully, her father’s training paid off as she remembers that red wine hides cyanide. He was trying to kill her.

Chase reveals his true self and they fight, Thea not strong enough to stop someone from the league. Just in time (one has to wonder though how closely Roy and Malcolm were watching Thea’s movements), Roy arrives to save the day, knocking down the door. He won’t let anything happen to Thea, helping (with Malcolm’s help) take Chase out. Chase won’t be captured though, taking cyanide and committing suicide. Good riddance. 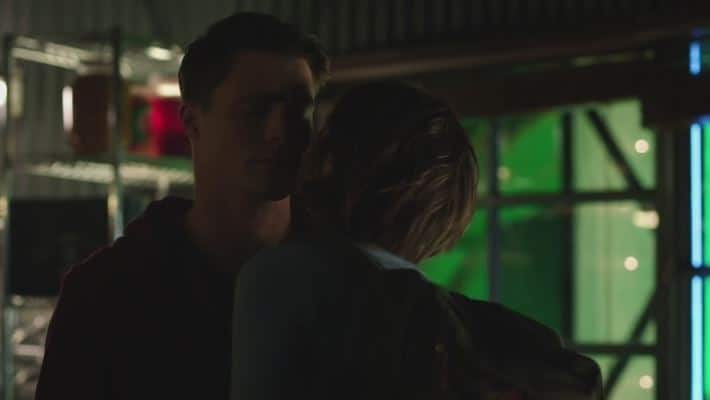 Later on, Thea thanks Roy with a kiss on the cheek. Not only did he stand up for her against Oliver, but he saved her life. I kind of think these two are starting to lean towards reconciliation. 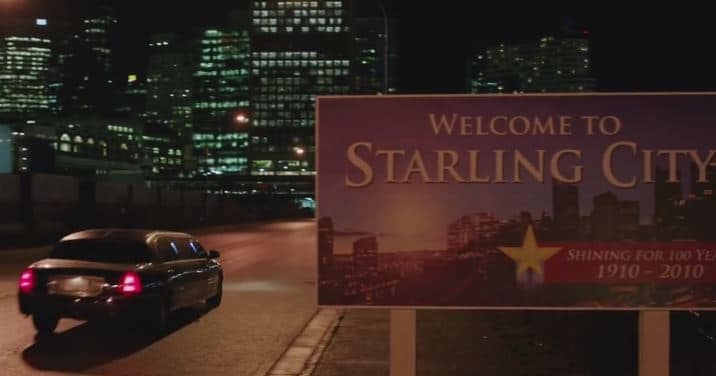 Back in Hong Kong( in the past), Maseo attempts to escape Waller with his family. He helps Oliver escape too, telling Oliver that once the press hears he’s alive, it would be harder for Waller to kill Oliver. Oliver even gets a phone call out to his mother, but it just wasn’t meant to be yet. Right after he left the message, he gets taken by Waller’s men (she really is an obnoxious human being) and tortured for Maseo’s whereabouts. Waller confesses that they erased the message before Moira got it; however, that unless Oliver tells her where Maseo is, they would kill his drug addicted sister. No one would suspect a thing.

Oliver tells her everything to save his sister. Soon after, Maseo gets taken in too, but only because he gave himself up to help save Oliver. Still needing Oliver alive, the episode ends with Waller taking Oliver back to Starling City. They have a mission there. Next week’s flashback should be very interesting. 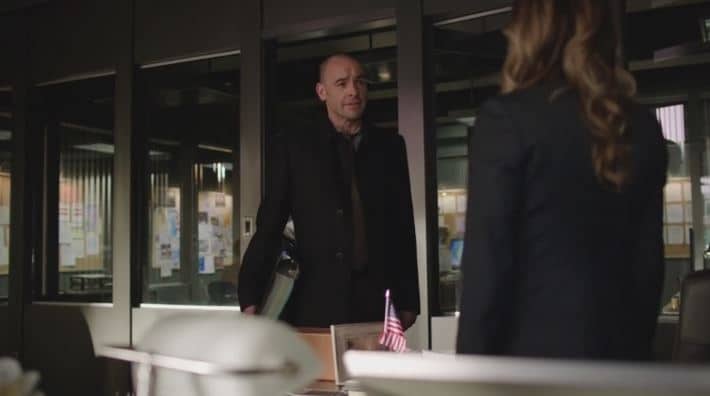 Quentin: You know, half the department is talking about the way you clocked that marshal. Those boxing lessons are really paying off.

Did anyone else think it weird when Oliver needed a second with him out on a mission and didn’t think of Diggle? I mean, come on. It was odd. Surely, a trained soldier would be a better choice. I just didn’t get that scene, other than to enforce Laurel as Canary. Look, I know Diggle is a father, but so what? He didn’t quit or anything. He was out in the field last week. I don’t mind Laurel becoming the Black Canary, but this scene was contrived. I want less sidelining of Diggle.

Does anyone think Laurel would benefit from some kind of special training (more than just boxing lessons)? Have her sit out missions for a while until she finds someone else to help her improve. I would love for Laurel to get a new trainer. Nyssa perhaps?

Paul Blackthorne is such a fabulous actor that is underutilized in the show. Would anyone else love to see an episode devoted to Captain Lance??

I have to admit that my favorite scene of the episode was Laurel clocking the marshal. Both Quentin and Felicity pointing it out, gave much needed humor to the seriousness of “Canaries.” If the news got hold of a DA punching out a marshal, it would be all over the news for sure. Honestly, it would probably go national.

What did everyone else think of “Canaries?” Were you letdown? Did you love the episode more than me? Sound off in the comments.

Our romance-themed entertainment site is on a mission to help you find the best period dramas, romance movies, TV shows, and books. Other topics include Jane Austen, Classic Hollywood, TV Couples, Fairy Tales, Romantic Living, Romanticism, and more. We’re damsels not in distress fighting for the all-new optimistic Romantic Revolution. Join us and subscribe. For more information, see our About, Old-Fashioned Romance 101, Modern Romanticism 101, and Romantic Living 101.
Pin this article to read later! And make sure to follow us on Pinterest.
By Autumn Topping on February 12th, 2015