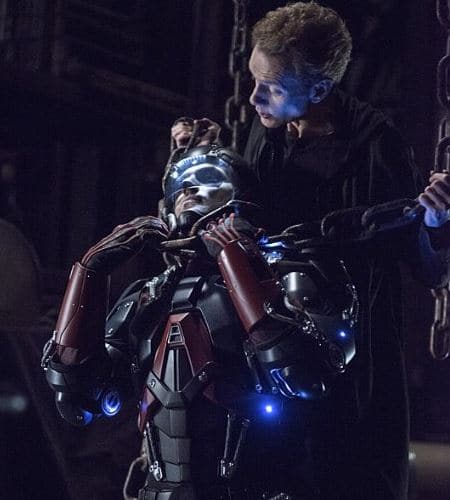 While this week is particularly busy for me, I still wanted to get something out on Arrow, albeit brief. So, I’m going to get right into it.

The ATOM and The Metahuman

With Roy off in prison and the Arrow now made obsolete, Oliver has to spend much of the episode learning to let others help him. After Laurel gets Oliver away from her father, he has to sit back and watch Ray work to take down the villain of the week, a metahuman from Central City (this seems to set the path for more metahumans in the Arrow world).

I have to admit that after watching Ray and Felicity have such a good time on The Flash this week, that it was hard to come back to all the “gloom and doom” of Starling City. Thankfully, Oliver’s predicament allowed Ray once again to be part of the team rather than off separate in his and Felicity’s own universe.

As one of the few Olicity fans (or so it seems) who actually likes Ray, I once again enjoyed him in tonight’s episode. He’s just so cute and awkward in a good way. I enjoyed seeing Oliver help teach Ray how to fight with more than just technology, especially because of Oliver’s side comments.

It was definitely interesting to see all the observations going back and forth between Ray and Oliver when it came to Felicity. Who loves who? Well I think Ray figured it out just by observing Felicity, who earlier even almost accidentally told Oliver she loved him. I can’t wait to see how things unfold next week. I kind of even feel bad for Ray. He’s just so sweet. Can I date him? 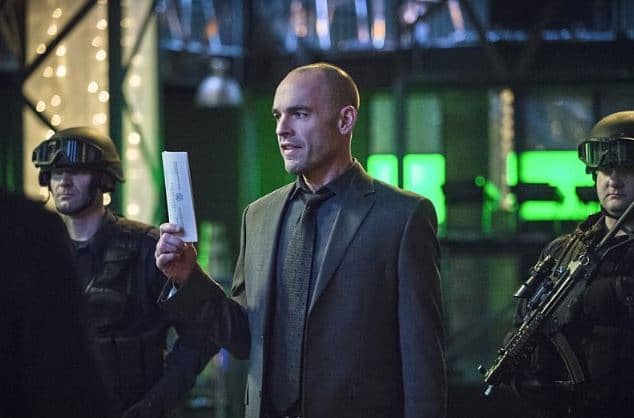 Roy made a choice and he lived by it. Even with Captain Lance trying to force everyone’s hands to still see Oliver as the Arrow, Roy won’t give in. By pretending to be the Arrow he can not only thank Oliver for saving his life, but he can gain a kind of redemption for killing the cop when he was under Mirakuru influence. But Roy had to suffer some consequences in the process. He had to die.

I don’t know about anyone else, but I knew Roy wasn’t really dead from that stabbing. We didn’t see him die and I felt no emotion during his death. If he had really died, it would have been one of the lamest TV deaths ever. Instead, Felicity and Diggle helped him fake his death, Roy leaving to live a different life. It’s sad that Roy and Thea don’t get a goodbye though.

With Roy safe, I knew something else was in the pipes. Sure enough, Ra’s Al Ghul showed up in Thea’s apartment and killed her. Thankfully, the Lazarus Pit seems to be coming into play…

Overall, this was a good if uneven episode. I liked the metahuman plot, Roy’s goodbye (could have been a little more exciting), and all the Felicity/Oliver interaction. Still, the suspense could have been amped up slightly, Captain Lance’s vendetta taken down just a notch, and the flashbacks just cut from the episode. The writers really need to tie in the flashbacks better sometimes. They are so disconnected at times and can occasionally break up the flow of the episode. The attempt at unity in “Broken Arrow” was weak at best (when Tatsu tells Oliver he needs to learn how to accept help from others). I just wish the flashbacks would be less circular. At least we know that Waller wasn’t the one after them.

What do you think about Roy’s goodbye? Thea’s death? Felicity’s almost declaration of love for Oliver? Sound off in the comments…

Stay tuned for my next (and more in depth) Arrow Recap.

Our romance-themed entertainment site is on a mission to help you find the best period dramas, romance movies, TV shows, and books. Other topics include Jane Austen, Classic Hollywood, TV Couples, Fairy Tales, Romantic Living, Romanticism, and more. We’re damsels not in distress fighting for the all-new optimistic Romantic Revolution. Join us and subscribe. For more information, see our About, Old-Fashioned Romance 101, Modern Romanticism 101, and Romantic Living 101.
Pin this article to read later! And make sure to follow us on Pinterest.
By Autumn Topping on April 16th, 2015