The Brave and the Bold Recap

This week on Arrow, the Flash/Arrow crossover came to a close (sadly), but it’s been a lot of fun in the meantime… 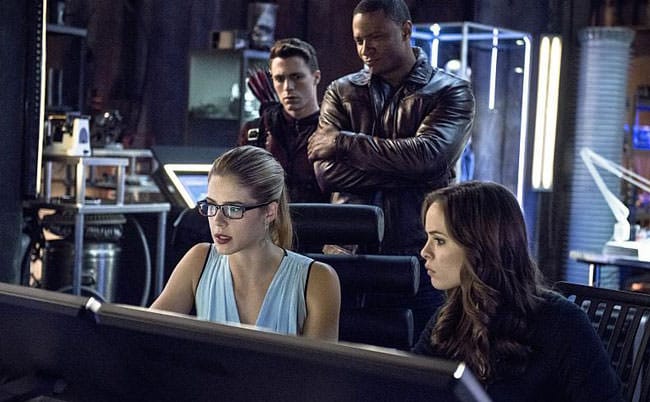 Still in hot pursuit of Boomerang, Team Arrow tracks him down to a house, but a house that has been triggered for a bomb, their killer gone by the time they get there. Someone else is in pursuit, however, and it seems ARGUS is involved which is never a good thing.

It’s a good thing then that Team Flash (as in Cisco and Caitlin) arrive to help with the excuse to run a DNA test about Sara’s killer. But really, they took some time off (more like took off without telling their boss Wells) because they wanted to see “The Arrow Cave.” And who can blame them?

Once down in the foundry, Cisco takes a look at all the toys, with a serious Oliver behind him making faces. While Cisco and Caitlin make themselves at home, Diggle is off checking out a lead, and that lead is his ex-wife Lyla (them not being married again the joke of the episode). Lyla doesn’t want to do any sharing, until Boomerang shows up to kill her. In some great action sequences, Digger Harkness takes down much of ARGUS with his boomerangs, somehow the director pulling this off without a bit of cheese.

Just when Diggle and Lyla need some help, Oliver and Roy arrive to save the day. But up against the boomerangs, Oliver has a fumble and is about to get hit by some when Barry (aka The Flash) then arrives to really save the day. Unfortunately, Harkness gets away, but now in danger, Lyla comes clean about who Boomerang actually is… Turns out that he was part of The Suicide Squad (perhaps a member of an old one or different group entirely from the one we’ve come to know) with a bomb in his head. Lyla, in charge of his team, had to make a choice a few years back when a mission went badly: she chose to set the bombs off, but somehow Harkness survived. Now he wants revenge.

To protect Lyla and stop Harkness, Team Flash and Team Arrow team up once more (cluing Lyla into Barry’s identity in a hilarious sequence), but this time it’s on Oliver’s terms… 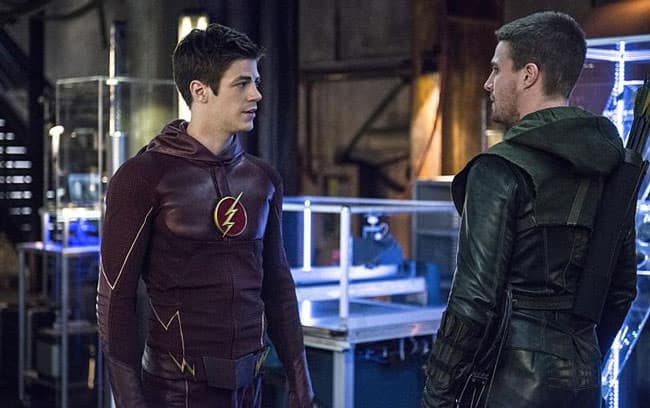 Aside from all the humorous asides from Cisco, Caitlin, and Felicity, one of the highlights of the show for me came down to the conversations between Oliver and Barry. In the Hong Kong flashbacks (that were thankfully related to the theme of the episode), Oliver was asked to torture a man to prevent bombs going off in the city. He couldn’t do it. Why? Oliver wasn’t ready to lose even more of his humanity just yet. After the bombs go off, he learns from the cold Amanda Waller that to deal with the extreme terrorists you have to be willing to do the extreme. When he gets a chance at “redemption” to torture again, Oliver takes it.

Back in present day, Oliver’s methods don’t sit well for the more “emotionally” healthy Barry Allen. Oliver tortures a man for information, and Barry disagrees with the choice. Oliver defends himself by describing Starling as “meaner,” while Central City is lighter. Oliver goes on listing all the people he knows that were murdered, including his own mother right in front of his eyes. Barry quips back that he saw his own mother murdered as well. Still, Barry really didn’t suffer on an island and be forced into slavery so of course he is more mentally sound. Nevertheless, the seed of doubt had been set in Oliver’s mind: that perhaps he could have made a different choice to gain information on Boomerang.

When the phone Oliver took from the man he tortured leads Boomerang straight back to the foundry, he realizes his mistake. When Harkness arrives (with no superhero to stop him), the girls (Lyla, Felicity, and Caitlin) have to save themselves. Lyla knows how to handle herself with a gun, but even she is no match for Digger who’s there to kill her. He gets one of his boomerangs in his chest, but before he can finish the job, Felicity throws a bomb at him, and in the process saves Lyla. Felicity and Caitlin get her stabilized but Lyla needs a hospital. Thankfully, Barry arrives just in time to speed her off to the nearest hospital. Oliver, though, can’t help but realize that his method of torture made this happen. He fell for another trap.

While Oliver thinks there’s isn’t anything left but the Arrow (his humanity slowly being chipped away), Barry disagrees. Barry, with all his lightness (much like Felicity), tells Oliver that it is the light in him that makes Oliver a hero. There’s still goodness in him and he can still inspire for goodness. Of course, Felicity arrives just at the end of this conversation about “Oliver Queen” and “lightness,” purposeful since she is typically part of Oliver’s light. Oliver needs to realize that love keeps him sane, that Oliver Queen is still there and could be happy if he only chose to do so.

With Felicity’s new lead, Team Arrow (without Diggle now who is at Lyla’s side) and Team Flash continue their partnership to take down Boomerang once and for all. Facial recognition led the team straight to a train station. Confronting Harkness, Barry and Oliver face a new threat: five bombs Harkness placed around the city. They didn’t have time to stop him and the bombs.

Thankfully, speed and time is on their side as Barry takes off and Oliver stays behind to fight. In one of the greatest sequences of the series, Barry uses his speed to place Felicity, Cisco, Caitlin, Roy, and himself to diffuse the bombs simultaneously. That’s what you call teamwork!

Meanwhile, Oliver takes down Harkness, Harkness waiting for the bombs to go off. He wonders why Oliver won’t torture him for info, but this time Oliver makes the better choice: he trusts in Barry. The bombs don’t go off, the day saved. That doesn’t mean that Oliver can’t take one more shot at Boomerang before him and Barry leave…

Before the two teams go their separate ways, Barry and Oliver have one more stand-off. Who would win between the two? Ready, Set, Go, and the two begin sparring just as the show comes to an end. 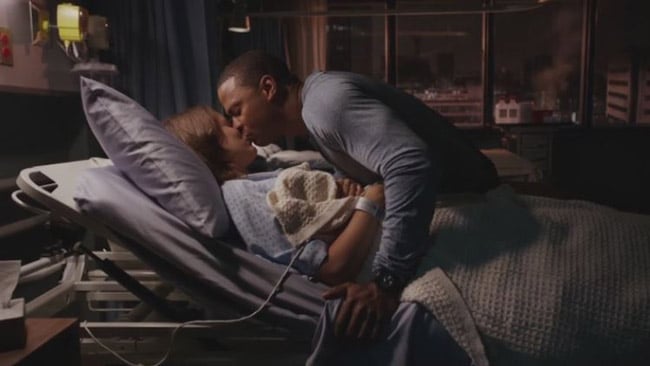 Taking a break from Oliver’s romantic life, the episode decided to focus on the relationship between Diggle and Lyla. Turns out they aren’t married again (since they were divorced), a point brought up several times in the episode. After Lyla gets taken to the hospital and almost dies, Diggle decides to make it official by asking Lyla to marry him…again. With a baby already on board, it was time these two seal the deal. A very sweet moment to be sure!

Favorite Quotes (because there were so many) 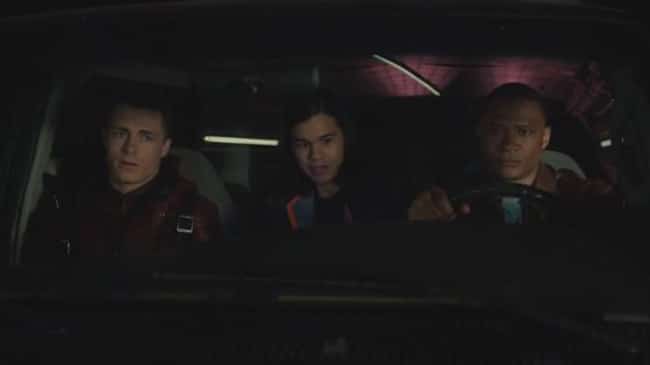 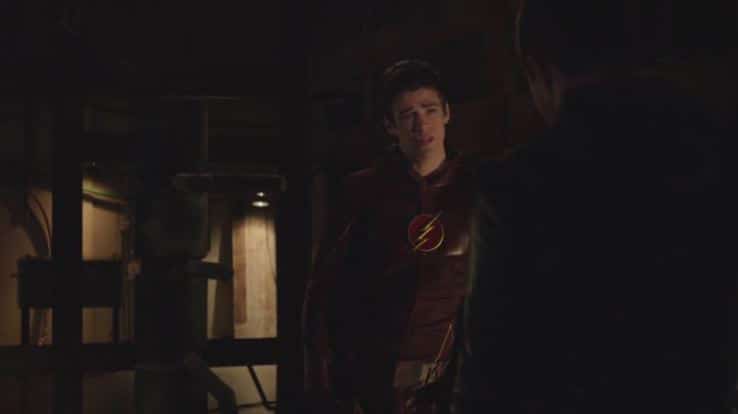 Barry: I think you’re full of crap. Look, you’ve convinced yourself that everything you’ve been through took away your humanity. But I think it’s because of your humanity that you made it through. You wouldn’t have survived, much less come out the other end a hero, somebody who wants to do good, if you didn’t have a light inside of you.

Barry: We’ve got a Pipeline, he’s got a gorgeous tropical island. (But it’s really not that long of a story) Back to Sara’s killer, my suspicions with Lyla have been awakened. She and Oliver have quite the conversation about doing the extreme, a point Diggle doesn’t understand at times. She does work for Lyla and was even willing to set a bomb off in people’s heads. Would she be willing to do something extreme such as kill Sara if she thought she had to?

Also, can Arrow add more humor (aside from Felicity) on a weekly basis? It really makes the show, while still darker than The Flash, even more fun to watch.

What did you think of the crossover? Have a favorite part? Sound off in the comments…

Stay tuned next week when I recap “The Climb.”

Our romance-themed entertainment site is on a mission to help you find the best period dramas, romance movies, TV shows, and books. Other topics include Jane Austen, Classic Hollywood, TV Couples, Fairy Tales, Romantic Living, Romanticism, and more. We’re damsels not in distress fighting for the all-new optimistic Romantic Revolution. Join us and subscribe. For more information, see our About, Old-Fashioned Romance 101, Modern Romanticism 101, and Romantic Living 101.
Pin this article to read later! And make sure to follow us on Pinterest.
By Autumn Topping on December 4th, 2014

2 thoughts on “Arrow: The Brave and the Bold Recap – The Flash, Boomerang, and a Proposal”