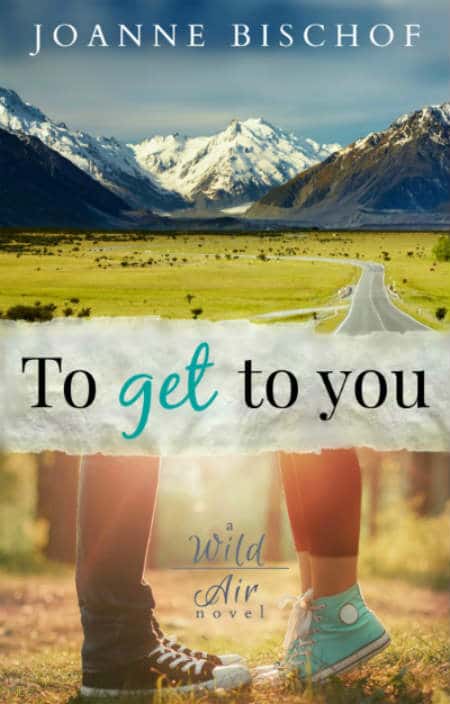 A first for author Joanne Bischof, her newest release not only shifts its setting (we begin the adventure in California), it also moves her comfort zone forward several decades to the contemporary age. Her debut contemporary novel also marks her first real foray into young adult fiction. With all of the changes she’s made to her publishing platform (she’s now among the Indie authors) and the subtle shift in styles, following her journey has been one adventure after another, and her latest novel, is quite literally, just that: an adventure.

It’s about an 18-year-old guy named Riley. Abandoned by his father years ago, Riley hasn’t had the best role model nor has he always been his best self. Working at a small-town feed store and Christmas tree farm, this year, things are about to change. That change comes in the form of Becca, a teenage girl whose family is the polar opposite of his upbringing. Becca is a homeschool student and per their belief system, Riley’s pursuit of Becca has rules (rules that he is more than willing to abide by). He’s ready to shed his rebel self. Then the worst happens when Becca’s father has an accident that takes her from California to New Mexico, and Riley is determined to get to her… even if that means relying on his normally unreliable father.

Poignant and beautiful are two words that come to mind when thinking back on this reading experience. Seriously, this is a sincere, honest and near perfect little read. It’s unique first because of its third-person narrative, which is exclusive to Riley’s perspective. Most readers might think it’d be a first-person voice when stories are limited to one person. I however, am not one of those people, and didn’t mind this method of telling the story in the least. I will just say there is no switch-off from boy-to-girl as so many YA novels are prone to do. By doing this, precedence is set.

We quickly understand this is Riley’s journey. Much as we might have relished getting to know Becca more, this needed to be Riley’s journey. When the story begins, he’s kind of a recovering rebel, for lack of a better term, and he’s only now coming to realize (on his own) that life doesn’t benefit anyone, himself included. This wasn’t so much a tale about a girl changing a boy as it is about the boy discovering on his own what was beyond life lived as a rebel without caring who he hurt while living that lifestyle. The translation and the way every detail unfolds are really charming. If you prefer a stronger emphasis on romance, then this book might not be a good fit.

What romantic interaction there is, is absolutely darling. I enjoyed Riley and Becca’s texts, their phone calls and her sweet personality. But this is driven as a character piece for our hero, and how he adapts to being stuck with the father he hasn’t seen in years. It’s a journey of healing and finding forgiveness in a quiet, poignant emotional way that’s wonderful. The page count is short, but the story has a purpose and is worth reading, especially for those of us who like a story with its primary goal on mending relationships as opposed to the cliché stripping them apart before the inevitable happy ending.

Grab a map, some road-trip snacks and a playlist or two, then be prepared to get lost (only in the best sense of the word) with Riley and Company. It’s my hope that you’ll be glad you did.

To Get to You releases on August 31st when it will be available to purchase as an e-book and in paperback form. The Kindle format can be pre-ordered on Amazon.

Under the right direction and production company, To Get To You is a story that could be amazing adapted as a film. As for a film already made, I cannot think of a compatible recommendation.

Our romance-themed entertainment site is on a mission to help you find the best period dramas, romance movies, TV shows, and books. Other topics include Jane Austen, Classic Hollywood, TV Couples, Fairy Tales, Romantic Living, Romanticism, and more. We’re damsels not in distress fighting for the all-new optimistic Romantic Revolution. Join us and subscribe. For more information, see our About, Old-Fashioned Romance 101, Modern Romanticism 101, and Romantic Living 101.
Pin this article to read later! And make sure to follow us on Pinterest.
By Rissi JC on August 13th, 2015

2 thoughts on “ARC Book Review: To Get to You – An Indie Novel with Heart About Second Chances”