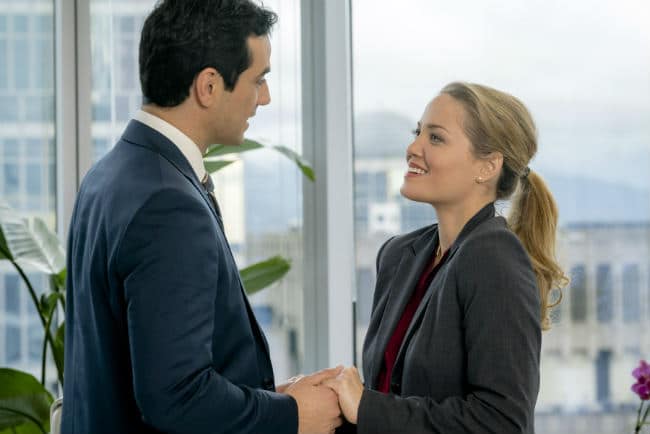 Anything for Love Review

The last of Hallmark Channel’s Countdown to Valentine’s Day films is here with their premiere of Anything for Love. Cute in the traditional way of this network and sassy in the vein of popular romantic-comedies, this one is a must see for those of you who enjoy the genre without the mess of adult content.

As the heir to her father’s company, Katherine (Erika Christensen) has a prominent role in the business world; a role that most men find intimidating. This is why she’s in a tepid relationship with a man (Antonio Cupo) whose idea of a proposal is that they move in together. Katherine’s assistant Debbie (Ali Leibert) believes that her boss needs to put her profile on an Internet dating site… and while doing so, bend the truth. Just a little truth-stretching won’t hurt, right? She gives Katherine her identity as an executive assistant, and then they watch the requests to meet Katherine pour in.

Jack (Paul Greene) is proud of his work as a nurse. But according to his friend, his profession is anything but an attractive quality for women. This is why, while he’s registering for his own dating profile, his friend tells a white lie on his profile page by making Jack a doctor. When Jack and Katherine both express an interest in meeting, they decide they’re interested in a face-to-face date, but it’s only a matter of time before their respective facades catch up to them. 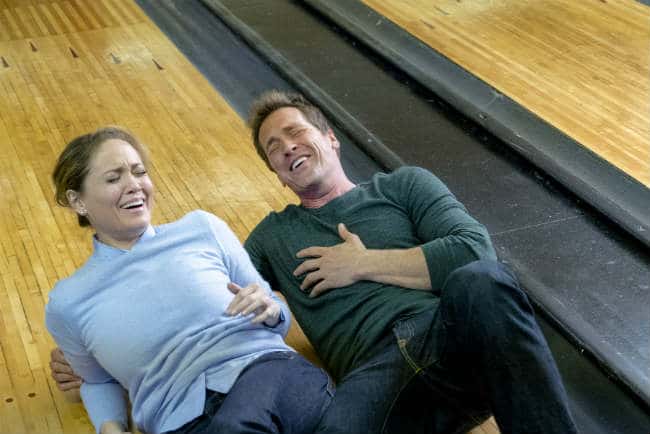 Like any good romantic comedy, this one is rife with happy accident catnip. There is a bowling scene (always a popular device), a weekend trip away and of course, mistaken identities that give the characters an excuse to pull away. In this way, the film mirrors (ever so slightly) the Kate Hudson film How to Lose a Guy in 10 Days. There are many differences, but just the idea of the characters (or, at least, Katherine) trying to become someone else for love has a ring of familiarity.

Casting so many familiar faces made this story a fun one. Paul Greene has starred in Hallmark films prior to this and not only have the familiar faces of  Ali and Antonio been in films on this network, they also appeared together on the WWII drama Bomb Girls. The camaraderie between the cast members makes the experience more fun, especially that between Katherine and her assistant. Their friendship is darling as is the role reversal Debbie gets to pull on her normally in control boss. Likewise, the scenes between Paul and Erika allow us to enthusiastically root for them as a couple. The flaw in the romance is the timeline which could have been more elongated without a need to make the movie longer in order to better depict a healthy and believable “love” declaration. 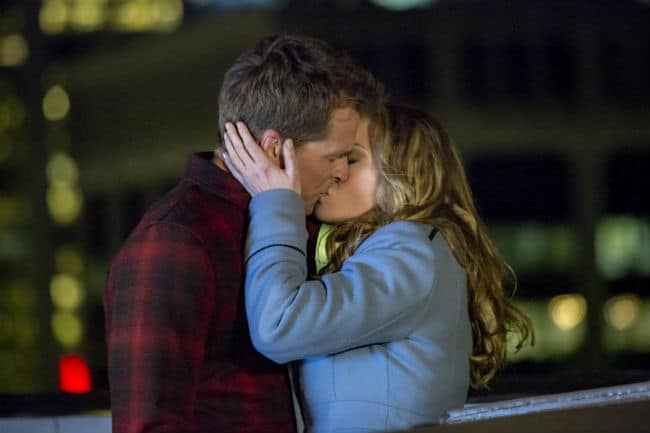 Minor complaints aside, if you’ve been watching the five films comprised of the 2016 Valentine’s Day celebration, Anything for Love is an entertaining way to close it out. Despite the white lies that dictate the better part of the script, the characters have a sense of guilt over how they begin the start of a fresh relationship with promise (this makes the darling ploy to get them back together so much sweeter), which makes disliking them difficult no matter what. The story is sweet with a much different yet effectively good twist on the usual hallmark of this network’s genre.

Have you seen this or any of Hallmark’s 2016 Valentine’s Day titles? Which has been your favorite? Comment down below with any thoughts. I’d sure like to read them.

Our romance-themed entertainment site is on a mission to help you find the best period dramas, romance movies, TV shows, and books. Other topics include Jane Austen, Classic Hollywood, TV Couples, Fairy Tales, Romantic Living, Romanticism, and more. We’re damsels not in distress fighting for the all-new optimistic Romantic Revolution. Join us and subscribe. For more information, see our About, Old-Fashioned Romance 101, Modern Romanticism 101, and Romantic Living 101.
Pin this article to read later! And make sure to follow us on Pinterest.
By Rissi JC on February 14th, 2016