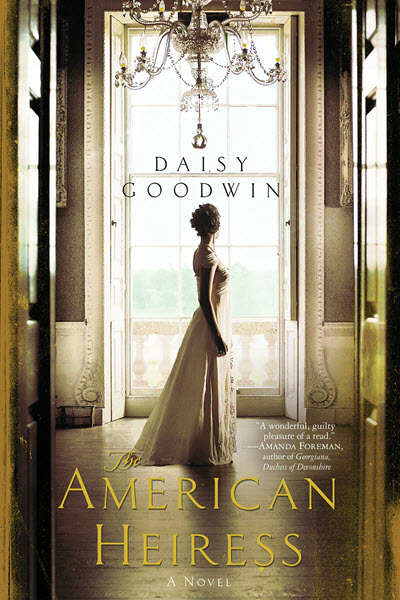 Before the BBC’s Victoria, Daisy Goodwin published her debut novel, The American Heiress, to critical acclaim. Set at the turn of the 20th Century, The American Heiress tells the story of Cora Cash, the only child of a wealthy American businessman. Cora is a beautiful girl, the toast of the town. She is the envy of her peers. She also has her pick of suitors. Yet, her mother, the indomitable Mrs. Cash, sets her sights on a title. Whisked away to England, Cora meets the enigmatic Duke of Wareham.  After a whirlwind romance, they marry and Cora’s new life begins far from home.

Yet, her mother, the indomitable Mrs. Cash, sets her sights on a title. Whisked away to England, Cora meets the enigmatic Duke of Wareham.  After a whirlwind romance, they marry and Cora’s new life begins far from home.

Daisy Goodwin’s novel of excess and romance is beautiful. It flows, almost serenely, from one scene to the next with little fuss and a great deal of heart. Loosely based on the life of Consuelo Vanderbilt, the beautiful American heiress who married the 10th Duke of Marlborough in 1895, The American Heiress is perfect for fans of Downton Abbey. And, of course, Victoria! 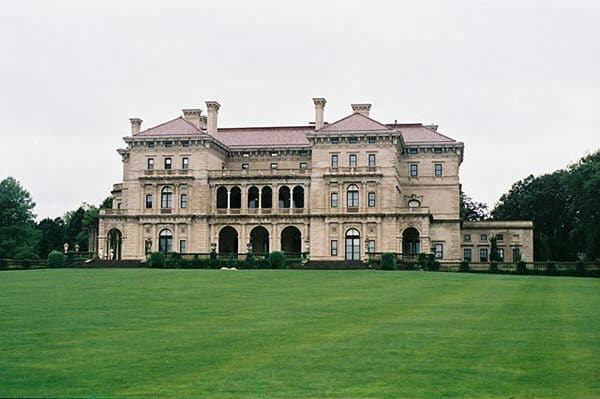 The American Heiress takes place in two distinct worlds. First, there is “modern” America, in the waning years of the Gilded Age. It was a time of glittering excess. The sparkling surface of the obscenely rich glossed over corruption and indulgent materialism. Money was the answer to everything. It was during the Gilded Age that some of the most spectacular “beach houses” sprung up across the northeast. Most notably in Newport, Rhode Island.

Related Post | Romantic Moment of the Week: Victoria and Albert

The more elaborate the house, the better. Parties echoed across magnificent lawns and in glorious gardens. Entertainment was opulent and impressive to even those who would pretend otherwise. Goodwin hits all the right notes in her descriptions of wasteful decadence. The American Heiress opens at exactly such a party in Newport, setting the stage of such luxuries. Readers meet the hummingbird man, pushing a cart filled with cages of hummingbirds. Each of them painted gold, designed to catch the firelight of torches when released into the evening air. All of them destined to die; their small bodies collected and discarded without a second thought.

The second world of Goodwin’s novel is Queen Victoria’s England. During the 1890s, England was experiencing declining Victorianism and the rise of modernism. Still, there was a generation clinging to traditional ideals. Consequently, the oldest of families were in declining wealth. Inheritance taxes, or death taxes, strained aristocratic landowners. Coupled with an agricultural depression, the English aristocracy was facing economic ruin. Treasures were quietly sold. These same treasures found their way into the homes of the nouveau riche.

Goodwin pulls lavishly from history to introduce Cora Cash, a daughter of America’s Gilded Age and the new wife of the Duke of Wareham. Cora’s sumptuous upbringing and lifestyle should make her self-centered and arrogant. And, at times, she is. Yet, she also has moments of piercing observation. Cora is confident and exemplifies the American spirit of the time period. The word “no” is foreign to her. Essentially, Cora gets what Cora wants. Thus, when her childhood friend Teddy Van Der Lyden rejects her proposal, Cora is genuinely in shock. As a result, tragedy strikes and Cora finds herself in England in search of a title. While her money gains her entry into the most polite society, she is an outsider.

As the new Duchess of Wareham, Cora’s vanity takes a hit. Her self-assurance wilts. Further, Cora’s inability to grasp the importance of tradition isolates her. At first, Cora uses her money as the answer for everything. But, Cora quickly learns that money causes more problems than it solves. Slowly, she begins to establish herself and repair her mistakes. Until a threat to her happiness rears it’s ugly head. Despite the turmoil, Cora smiles brightly. She shows what it means to be an American girl. While inside, she is falling apart. Cora clings to her spirit and regains that independence we fell in love with at the beginning. The same independence that captured Ivo’s attention.

Ivo’s intensity is certainly swoon-worthy. He is darkly magnetic with an air of mystery that never quite dissipates. Ivo is at times brooding; but not without charm. On the surface, he is the perfect Englishman. However, deep within lies a passionate heart. Unfortunately, Ivo is the least developed character in The American Heiress. Consequently, Ivo’s motivations are unclear. We only get a peek at Ivo’s heart through the observations of others. Readers never get to sink into Ivo’s psyche like we do Cora.

Still, Ivo remains appealing. While Goodwin may not give us much of Ivo’s inner thoughts, we do get some glimpses. Further, we see a side of Ivo that only Cora sees. It’s her viewpoint that deepens his mystery. And his allure! His romantic overtures are tinged with her breathless anticipation. Goodwin’s prose gives depth to these emotional nuances. As a result, Cora’s reactions will have your heart racing!

The American Heiress is as much about Cora as it is about Bertha. In fact, Bertha’s story is as compelling. As a black servant in the late 19th Century, Bertha’s viewpoint is significant to the story. During that time period, it was unusual for a lady’s maid to be black. As a result, there is tension between Bertha and the other servants.  She does not fit in “upstairs” nor “downstairs.”

In England, Bertha experiences class discrimination among servants. As a lady’s maid, she receives a modicum of deference. Further, she realizes the color of her skin is not as big a factor as it is in America. Thus, when she meets Jim, her heart opens to love. However, Bertha and Jim must keep their relationship a secret. It could cost them their jobs. As a result, their romance is furtive.

Bertha’s love story is interesting for several reasons. First, it’s a romance ahead of the time period. Second, Goodwin gives Bertha an appealing voice that does not shy away from class and racial differences. Last, there are greater consequences to Bertha and Jim should Cora or Ivo discover their romance. Their secret gives the novel a wonderful tension.

Final Thoughts on The American Heiress

The Gilded Age of America clashes with Victorian-era England resulting in a romantic story where love truly conquers all. Goodwin beautifully contrasts these two worlds in Cora and Ivo. Further, Goodwin’s narrative is wonderful. It flows freely, the descriptive perfect in both tone and in history. The dialogue is sharp yet authentic. It turns the characters into living, breathing figures in history. The American Heiress is the perfect guilty pleasure read.

The American Heiress is available at your favorite bookstore or online retailer. It’s available on Kindle, iBooks, Google Books and Nook. For UK readers, the novel is titled The Last Duchess.

For more on the mansions the Gilded Age in Newport, Rhode Island, visit The Preservation Society of Newport County here.

Are you a fan of Daisy Goodwin? Have you read The American Heiress? Tell me what you thought of the story in the comments below!

feelings will not be suppressed. You must allow me

Our romance-themed entertainment site is on a mission to help you find the best period dramas, romance movies, TV shows, and books. Other topics include Jane Austen, Classic Hollywood, TV Couples, Fairy Tales, Romantic Living, Romanticism, and more. We’re damsels not in distress fighting for the all-new optimistic Romantic Revolution. Join us and subscribe. For more information, see our About, Old-Fashioned Romance 101, Modern Romanticism 101, and Romantic Living 101.
Pin this article to read later! And make sure to follow us on Pinterest.
By Catherine on September 21st, 2017