Always a Witch is a current, Colombian, young adult, fantasy drama series, whose first season is available on Netflix. The series is based on the book Yo, Bruja by Isidora Chacon. Always a Witch follows a 17th-century slave and witch, who time walks into the 21st century to complete a mission. The mission will have repercussions for the past – and the present and the future. But this witch is here in the future – our present day – to save the man she loves.

Always a Witch has a solid ensemble supporting cast, but the main character is Carmen, played by the rather enchanting Angely Gaviria. Carmen is a very likable character. And she is supported by some stock, yet also very likable, characters.

It’s a show full of parties and beaches and corny CGI and this out-of-time witch muddling along. There are hotties and baddies aplenty – in the past and the present. There are cobblestone roads and vibrant local culture in this Cartagena. 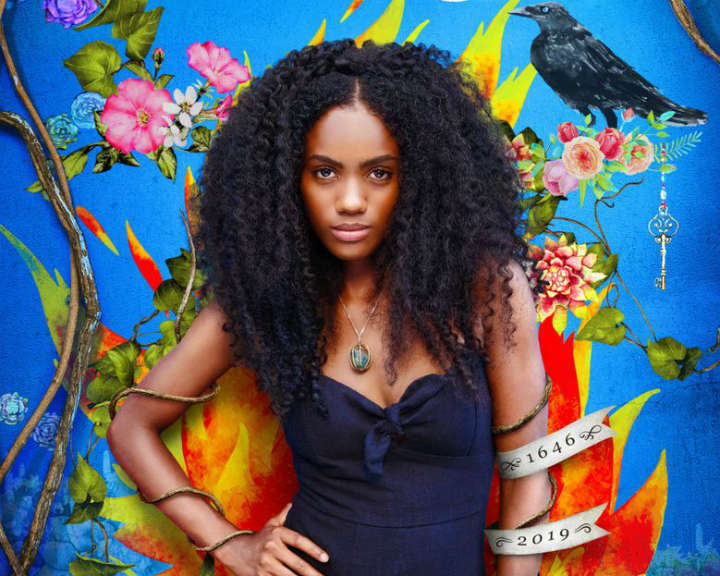 In 17th-century Cartagena, Carmen is a slave with special powers, like her mother before her. She is orphaned and owned by a wealthy Spanish family. Carmen and her owners’ son, Cristobal, fall madly in love. But this is a time of inquisitions and witch burnings when black people are seen as less than human, as objects to own and do with as you please. So, Cristobal and Carmen are about as star-crossed as you can get. And here, I will just say that this love story has raised some hackles about the relationship’s inherent power imbalance, about the white savior trope, etc. But just put that critical brain away and enjoy.

Cristobal and Carmen’s love is doomed. She’s accused of being a witch, found guilty. In the ensuing fray, Cristobal is killed. Sitting in prison, crying over her fate and the loss of her love, an old man in the cell next door offers her an out. He is Aldemar, a great warlock, who is trapped in this time. But he says that if Carmen helps him by time-traveling into the future, he will help her in the here and now. He can help save Cristobal.

RELATED: THE CHILLING ADVENTURES OF SABRINA: A NEW AND DARK ADAPTATION

So, as she burns at the stake, Carmen utters the incantation from Aldemar and suddenly finds herself in an unrecognizable Cartagena of the distant future. This is a Cartagena, where a serial killer is burning women, turning them to ash. This is the Cartagena where Carmen must find her contact, deliver her stone, and return to the past to save Cristobal from his fate.

It, of course, does not go as easily as planned. The contact disappears. There’s a witch hunter on the prowl. Police find her suspicious. And Carmen’s got to start figuring out what to do, how to complete Aldemar’s mission on her own, so she can return. All this in a time and a culture that is alien to her.

I’m not going to go into it all, but she – a slave and a woman – ends up at a university, making friends, learning. There are twists aplenty. For a show called Always a Witch, Carmen does seem to lose her powers rather frequently. She’s got to let down her guard, share her secrets and allow others to help her.

There are leaps in logic in Always a Witch and all sorts of time traveling inconsistencies. No one seems to care about the possible repercussions of sending an iPhone into the 17th century for instance. The love interests for our dear Carmen feel forced, and the burgeoning love triangle perfunctorily scripted. Her magic seems chaotic – there is no internal logic going on there. We never do figure out how or why it works or doesn’t. Yeah, it’s all a bit of a muddle.

But, when that is said, there are some really nice things going on here in Always a Witch. Just the fact that Carmen is the traveler, a past person coming to the present, is a bit of a genre-bender. The time travel trope – in my experience – is often that of the relatable modern-day human doing the traveling. Or a future time traveler coming into our modern day. So, the bringing of the past to the present feels fresh. But they didn’t quite flesh out the consequences of this. There’s some humor there, but there could have been more exploration of how the past views our present.

Furthermore, there’s this inexplicable physical connection to the past, which allows Carmen and Cristobal to communicate through time. Notes and letters slipped into a door lintel – a door lintel in a house that stands in both the 17th century and the 21st – travel through time. That felt magical. I have a soft spot for the romantic letter trope, so the very idea of penned romance through time, well, that was very appealing.

So, there are some lovely elements in this muddle. Some very lovely people, lovely to look at (and here I’m thinking about a certain biology professor (Sebastián Eslava), who is very fine, even if we’re unsure where his loyalties lie). So, it’s eye candy, diverting fluff, and I’ll be tuning in for season 2.

Our romance-themed entertainment site is on a mission to help you find the best period dramas, romance movies, TV shows, and books. Other topics include Jane Austen, Classic Hollywood, TV Couples, Fairy Tales, Romantic Living, Romanticism, and more. We’re damsels not in distress fighting for the all-new optimistic Romantic Revolution. Join us and subscribe. For more information, see our About, Old-Fashioned Romance 101, Modern Romanticism 101, and Romantic Living 101.
Pin this article to read later! And make sure to follow us on Pinterest.
By Jessica Jørgensen on April 15th, 2019