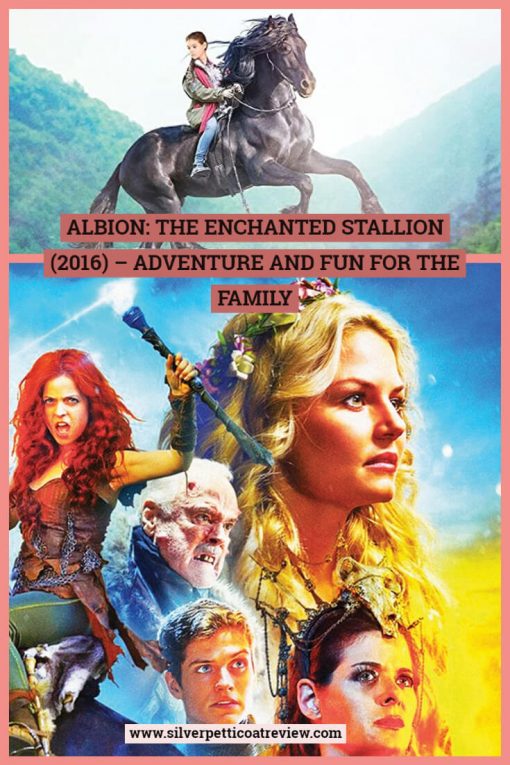 Albion: The Enchanted Stallion is a fairy tale quest the whole family can enjoy.

A twelve-year-old girl is transported by a magical black stallion to the mystical world of ALBION, where she discovers that she alone is the key to saving an entire race of people.

No genre-bending tale, Albion: The Enchanted Stallion is a pretty straightforward quest tale about a girl entering a magical realm, where an identity-building mission awaits.

Evie (Arendes) mucks out stalls at the local landowner’s stables, hoping to help lift the financial burden off her invalid father’s shoulders (Dorff). He tells her magical stories of mythical horses called selkies, and darned if she doesn’t meet one.

She finds a mysterious black stallion, fully tacked and ready to ride, but with no rider. When she hops into the saddle herself, the horse gallops off, plunging into a frozen lake. Evie comes to in another world – Albion.

Albion is a world divided, with an uneasy truce that requires one nation to live underground, while the other lives above. The Dananns got the short end of the stick and are forced to live down below, while the Melessians rule above.

A new treaty can be brokered, but only if four magical items are assembled to break the existing treaty. All this is explained to Evie by the Danann warrior woman Erui (Landon). The stallion, speaking to Erui, insists that Evie must be a part of this mission.

RELATED: WILLOW (1988): A RIP-ROARINGLY FUN FANTASY FOR THE WHOLE FAMILY

And it goes from there. Evie, Erui, the stallion Dag Dia embark on their quest, meeting many helpers along the way and incurring the wrath of the Melessian ruler, the very grotesque and gruesome General Eeder (Cleese). Melessian soldiers are on their tail. And Evie is finding that she fits better in this world than she does in her own. Oh, but how could that be?!

Watch Albion: The Enchanted Stallion and find out!

Albion: The Enchanted Stallion is fun fantasy fare for the family. While sporting some rather standard, tried-and-true tropes, Albion puts them to good use. It’s fast-paced, funny, and John Cleese’s General Eeder is deliciously bad.

Yeah, there are some very good supporting roles here, who steal the show. Ryan O’Nan and Daniel Sharman are very funny in their respective supporting roles, while Liam McIntyre is a frightening beauty in his.

So, if you’re looking for laughs and action and fantasy, and love fairy tales, check out Albion: The Enchanted Stallion.

Content Note: Rated PG. There are some intense scenes, as well as some gross scenes involving a certain obese General, who bites off fingers, chokes on them, that sort of thing. No gore, just squeamishly gross.

“I think this is the beginning of a beautiful
friendship.”

“Happiness in marriage is entirely a
matter of chance.”