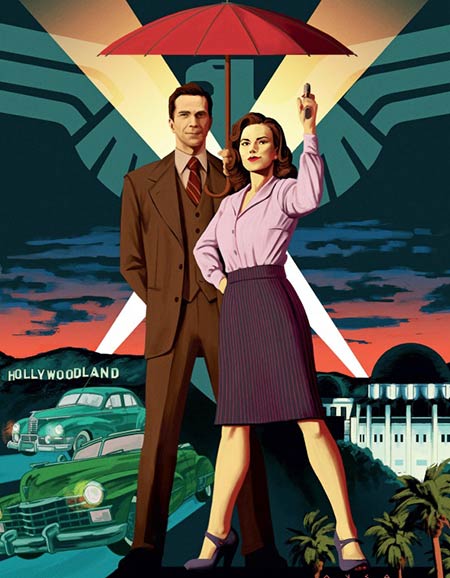 Perhaps hoping to catch some new viewers, Agent Carter season 2 had a complete makeover, and I’m not sure it was really a necessary change. Don’t get me wrong, Peggy and the rest of the gang (particularly Jarvis) are still in top form, but the writers didn’t really need to fix what was already working…

The season 2 premiere gave us two episodes: “The Lady in the Lake” and “A View in the Dark.” With noir like titles to emphasize the show’s move to L.A., the show promised a new kind of adventure for our heroine. And even though I’m still iffy about the move, the dialogue was just as snappy as ever. 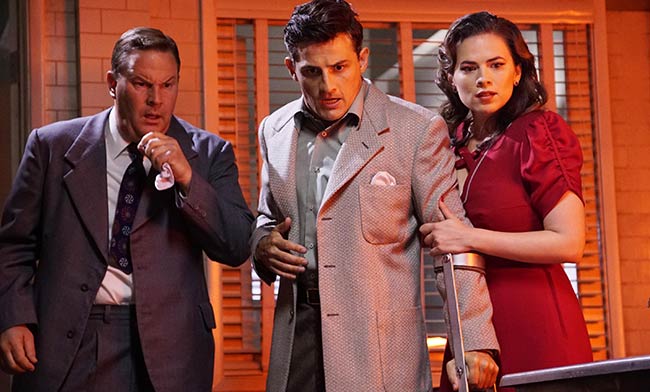 The first episode begins in New York with Dottie breaking into a bank. Peggy, of course, finally apprehends her and is beginning to make progress in the interrogation room when Chief Jack Thompson decides to get Peggy out of his way by sending her to L.A. where Sousa had been relocated (Thompson clearly still wants to take the credit for everything). There’s a Marvel type murder to be solved: a woman frozen in ice and Sousa needs help solving the case.

Thankfully, for Peggy, Jarvis and Howard Stark just happen to be living in L.A. while Howard pursues the movie industry. With a place to stay and her old sleuthing partner around again (Jarvis really wants an adventure), Peggy is back and ready to crack a seemingly unsolvable mystery.

In the meantime, Sousa doesn’t seem so pleased to see Peggy. There’s an awkward distance between the two. Clearly, something happened, but we don’t know what. There’s also the problem of Sousa practically being engaged – he has the ring to propose – to the nicest girl ever while still having feelings for Peggy. The situation is rather complicated.

The serial killer case is just as complicated and a conspiracy has started to unravel. During their investigation, Peggy and Sousa end up at a company called Isodyne Energy, a company that deals with technology capable of freezing their victim to death. Once there, Peggy makes an ally in a scientist named Jason Wilkes (a way to show the racism in L.A.), a romance beginning to brew between the two until he either gets blown up or sucked into the Zero Matter dimension. Only time will tell…

At the center of the mystery is aging actress Whitney Frost, a woman, along with her politician husband, that are interesting in uncovering the secrets behind this dangerous Zero Matter. Her husband also sits on the council of a corrupt group of men.

Another corrupt man seems to be Jack Thompson’s FBI mentor who takes over the Dottie case, claiming it’s for Jack’s own good. I personally smell a rat!

Elsewhere in the Season 2 Premiere 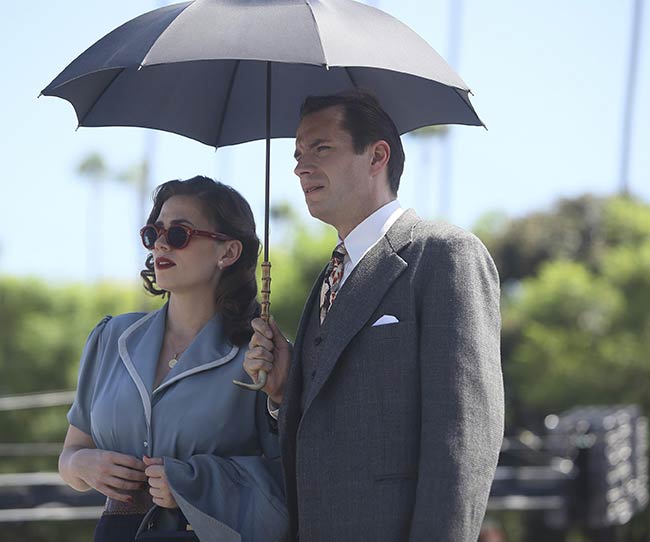 We are FINALLY introduced to Jarvis’s wife and she’s quite the little firecracker! It’s hard not to like her. That doesn’t mean that I’m not secretly hoping that they kill her off, and leave the door just a smidge open for Jarvis and Peggy down the road. I’m kind of not sorry for thinking this.

It was entertaining, charming, witty, and an all-around fun time. Still, the back and forth between New York and L.A. was a little jarring. I LIKED the setup at the end of last season. Now, Angie the actress has no part to play (though why they didn’t write her into the Hollywood plot is beyond me), and the romantic entanglements are as confusing as all get out. We have Sousa who clearly doesn’t know what he wants, Wilkes who takes up too much Jarvis sleuthing time, and then the extreme tension between Peggy and Jarvis while his wife is watching. The sparring scene between the two of them was so palpable that it’s difficult to understand just where this story is headed. Add in the meta line from Jarvis about not finding “the right actor” yet as a love interest and this gets even more confusing.

Overall, I quite enjoyed the premiere (and it remains one of my favorite shows on TV) even if the mystery is a little less intriguing than the Howard Stark mystery from season 1.

Quote of the Week

Jarvis: Aside from Danger, my middle name is Charming.

What do you think of Agent Carter Season 2 so far? Sound off below…

Our romance-themed entertainment site is on a mission to help you find the best period dramas, romance movies, TV shows, and books. Other topics include Jane Austen, Classic Hollywood, TV Couples, Fairy Tales, Romantic Living, Romanticism, and more. We’re damsels not in distress fighting for the all-new optimistic Romantic Revolution. Join us and subscribe. For more information, see our About, Old-Fashioned Romance 101, Modern Romanticism 101, and Romantic Living 101.
Pin this article to read later! And make sure to follow us on Pinterest.
By Autumn Topping on January 20th, 2016