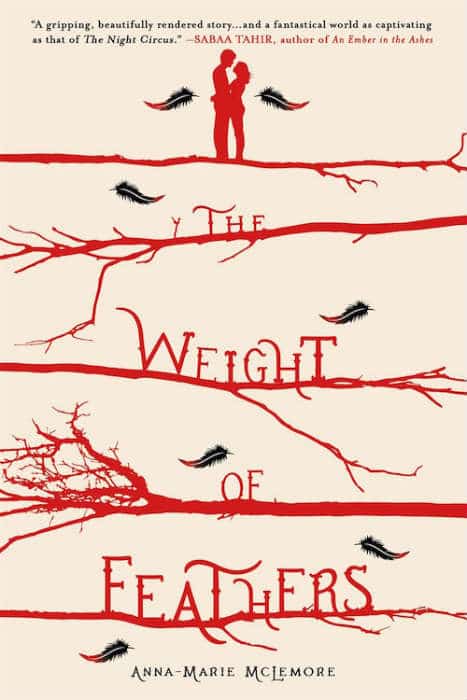 Anna-Marie McLemore’s world in The Weight of Feathers is written so beautifully, it’s tragic that such a place does not exist — or if it does, it’s secretly hidden away, revealed only to those worthy. Lace and Cluck are worthy of this special world; born of two families, both similar though one has a connection to water, and the other to the sky. Lace’s family, the Palomas, are travelers who perform a water show as mermaids, while Cluck’s family, the Corbeaus, take to the sky in their performance act walking across the highest tree branches around. Each family spreads rumors about the other, and though these families been stuck in a feud for some time, with bad blood between them, neither family is willing to give in.

Lace and Cluck have grown up with their parents’ and grandparents’ words branded into their minds — that these families do not interact, under any circumstances.

It’s familial propaganda that the teens are fed, as both teens are born with the physical signs of their families; Lace has small, shiny, and round birthmarks on her back, and Cluck has black and red feathers growing from the nape of his neck.

Lace has done makeup and helped her female relatives prepare for the mermaid show for some time, but her Abuela finally gives her a chance to perform alongside them. It is this same night that tragedy strikes, for Lace’s mermaid tail gets caught in a nylon net, set in the water where the Palomas have their show. Because of this, when a nearby factory has an explosion, causing chemical rain to fall in the town where both the Palomas and the Corbeaus are set to perform, Lace is caught outside and trapped by the rain, burning her slowly to death.

Cluck also happens to be out, searching for one of his relatives who was wandering around before their show in the trees. He happens upon Lace, who he had interacted with previously in town when she came across her cousins beating him up. At the time, he didn’t know she was a Paloma, and so he rescues her, taking her to the local hospital. When Lace awakens and realizes that Cluck is a Corbeau, she panics and throws him out. She’s scarred on her face and body from the chemical rain, and her fears have come true — a marking in the shape of a feather from Cluck is on her arm from when he touched her. Worried that her family will disown her due to this marking, she lies to them. But the damage is done, and with her scars, her Abuela won’t allow her back into the show. Not knowing where to go, Lace decides to find Cluck, to find some sort of repayment for saving her life, and for forgiveness for her anger with him at the hospital. Lace thinks that in doing so, the feather mark will disappear and that her family will welcome her back with open arms.

When Lace shows up to the Corbeau’s camp, Cluck is reluctant to have her around though Lace hides the fact that she is a Paloma. But after she helps the female performers with their makeup, she stays on. As Lace spends more time with Cluck, she finds out more about him and his troubled family history. His own mother seems to ignore his existence, his older brother constantly is beating him up, as are his other male relatives. Cluck’s left hand is scarred, three of his fingers unusable, and so he mostly stays by himself, working on the costumes for the shows. The only person Cluck is close with is his grandfather, who is ill, but still cares tremendously for the boy. Lace realizes that the two families are more alike than they’d care to admit, and she finds herself falling for Cluck, and he for her.

As each day passes and Lace knows that at any moment, her true identity could be revealed, she debates about whether she should tell Cluck the truth, knowing it could destroy him, darkening all that they’ve experienced together.

Each page was bursting with wonderful descriptions, whether it was about the landscape the families were performing in, or the atmosphere of their camps. The narrative easily switches between Lace and Cluck, really giving readers a broad scope of each characters’ emotions. Their romance is an underlying current between the stakes of what would happen if their families found out about them, but still strong enough so that it never quite goes away. (SPOILER) A scene where Cluck has discovered that Lace is a Paloma and she decides to show him her mermaid act is well-done, almost tame though Lace is topless. Lace and Cluck’s passion and tenderness for each other is balanced between scenes of trying to understand the other, and the author writes them brilliantly.

This would be a lovely film, perfect for fans of Big Fish and Edward Scissorhands. Though it’s definitely a spin on the Romeo and Juliet tale, it is contemporary enough to appeal to audiences looking for romance! I know Gina Rodriguez is extremely popular right now, with her fantastic work on Jane the Virgin, and I think she’d be spot on as Lace; tough enough to do things her way, but can play sensible and vulnerable if need be. I’d cast Avan Jorgia as Cluck — he’s good at playing characters with secrets, but can also play gentle too, as he does in Twisted.

Our romance-themed entertainment site is on a mission to help you find the best period dramas, romance movies, TV shows, and books. Other topics include Jane Austen, Classic Hollywood, TV Couples, Fairy Tales, Romantic Living, Romanticism, and more. We’re damsels not in distress fighting for the all-new optimistic Romantic Revolution. Join us and subscribe. For more information, see our About, Old-Fashioned Romance 101, Modern Romanticism 101, and Romantic Living 101.
Pin this article to read later! And make sure to follow us on Pinterest.
By Clarissa Hadge on July 27th, 2015