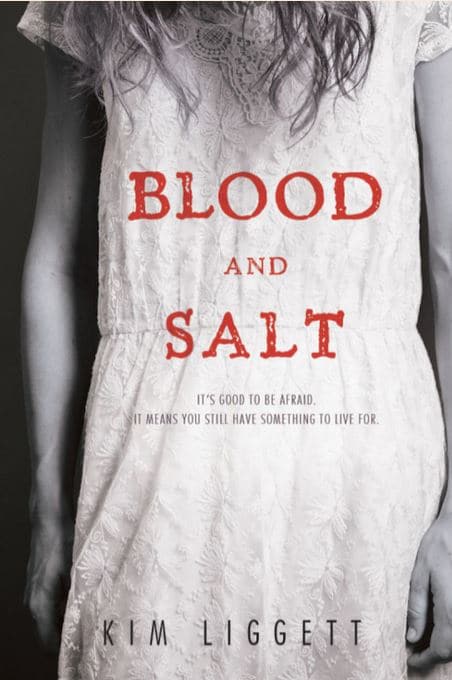 SPOILERS: Advanced YA Review of Blood and Salt

From its opening pages, Kim Liggett’s Blood and Salt holds nothing back. The novel follows Ashlyn “Ash” Larkin and her twin brother Rhys on a dark adventure to a cult in Quivira, Kansas. Their mother, Nina, escaped this cult while pregnant with them. As such, their upbringing is anything but normal. Nina has raised them in New York City, after escaping from Quivira.

But the community of Quivira is difficult to completely break away from, and Ash is well aware of this fact. Since childhood, she has been haunted by visions of a dead girl — a girl who happens to look exactly like her. Nina’s heritage has ties to Ash’s visions, for the girl that Ash sees is from many generations past.

She had powers that people both revered — the ability to turn metal into gold— and feared — immortality. When Katia spurned Coronado for another man, Alonso, one of Coronado’s own soldiers, and a man that she was to share her immortality with when they reached the New World, Coronado had Alonso killed. Coronado made a blood bond with Katia as further punishment, tying the two of them together until the perfect human vessels could take their souls and break their bond.

Ash — and Nina’s — history is complicated, and though they’ve been far from Quivira for some time, Nina takes special steps to keep her children safe, including tattooing Ash with symbols that she claims will ward off those in the metaphysical world who intend Ash harm. Nina’s strange behavior, though typical to her children who have become accustomed to it, increases in its erratic quality, and Ash feels as though there is more to the story of Katia, Coronado, and Quivira and their connection to it than her mother has indicated.

When Nina disappears, leaving Ash and Rhys a convoluted voice mail signaling her return to Quivira, and Ash’s visions interact with her more than they ever have, giving her more clues to her history, she decides to go to Quivira to rescue Nina. Rhys is hesitant, but comes along, becoming more convinced after a flock of menacing crows mysteriously settles in their mother’s art studio. While on the road, Ash’s visions continue to provide her more information about Katia and Coronado and what happened to the community of Quivira.

Upon arrival to what they think is Quivira, cornfields spreading for miles around them, their car stops and dies. Hundreds of cars are located in the same area, ranging from the present to many years prior. Ash sets out to see if she can find help and runs into a boy about her age. In what seems like a dream, or one of her visions, Ash doesn’t find out much information about how to get to Quivira, but they have a tension-filled conversation, one that ends abruptly when the boy finds out Ash’s last name, and runs away. Returning to her brother, they interact with a local man who reveals that the cemetery of cars are from people who have come looking for Quivira, and have disappeared. He tells them that they must go through the cornfields to reach the community, and with no other option, they set off.

They reach Quivira, and which doesn’t look like it is in the 21st century. Ash thinks it looks like a utopia, and is immediately taken aback, not knowing how to respond to the beautiful scenery. Rhys is still unsure of what to expect, and unwilling to trust the people there.

As she interacts with the community, Ash is surprised by their welcoming attitudes, but knows that there might be something sinister lurking beneath the bright and shiny façade.

However, Ash finds herself allowing to go through with what the community asks of her —participation in a ceremony that they claim her mother and their long last father, Thomas, would have gone though, had either of them been present. With the realization that Nina is not there, but with claims from the community that she will be arriving soon, Ash goes through with the ceremony, if, for nothing else, to gain the trust of Quivira so that she and Rhys can take Nina away upon her arrival without suspicion.

Rhys wants to leave, to gain help from the outside world, but Ash talks him out of it. They learn more about the families in Quivira, and though there is not a set hierarchy in place — they are a utopia after all — it is clear which families believe they have better breeding than the others. Ash finds out the name of the boy she met previously, Dane. He is a Mixed, a person with traces of Coronado’s blood, and as such, Ash’s interactions with Dane are frowned upon by the rest of the community.

But things take nebulous turns SPOILERS — a few community members die while Ash and Rhys are there, Ash discovers that she and Rhys physically cannot leave through the cornfields without a guide, who turns out to be Dane; it becomes clear that their mother is not going to appear anytime soon, and secrets are revealed about both Dane’s past and Rhys’s future. The truth to Katia and Coronado’s story and Ash’s visions becomes increasingly more apparent.

Ash must decide what she really believes in, before she becomes the sacrifice of Quivira, the fate her mother escaped so many years before.

Though I thoroughly enjoyed this book, and the ending sets things up for a sequel, the backstory of Katia and Coronado was difficult to follow. There were several moments where I had to read back to remember all of the plot points; there’s almost enough in the past storyline — with Katia and Coronado — to have an entire book just about those events. With Ash discovering more of her family history in flashbacks and visions, the Katia and Coronado backstory  at times was abruptly put into the Ash’s storyline. This worked in with some moments, giving the reader a feel for how Ash couldn’t always predict when her visions would occur, but it was jarring in other moments.

Liggett does do a wonderful job of creating a lush, rich landscape with the community of Quivira. She does an equally brilliant job with Ash and Dane’s romantic interludes, teasing the reader with just enough scenes to pull a will they/won’t they? relationship. With so much of Ash and Dane’s relationship relying on the Katia and Alonso’s (not Coronado) relationship, Liggett does well with conveying the differences between the two couples.

This novel would look beautiful on the big screen, and would appeal to fans of dark fairy tales. Since it’s being pitched as Children of the Corn meets Romeo and Juliet, if this were adapted into a film, moviegoers who enjoy films from Tim Burton and Guillermo del Toro would like this story as well. The forthcoming Crimson Peak from del Toro has a similar vibe to Blood and Salt. I definitely got a feel of The Wicker Man in there too.

For casting, I’d put Saoirse Ronan as Ash. She has the chops to do dark films (she’s excellent in Byzantium and Hanna), but still comes across as very relatable. For Rhys, I’d cast Colin Ford (young Sam on Supernatural, and more recently seen on TV’s Under the Dome), who I think could play up Rhys’s inherent mistrust of Quivira against Ash’s willingness to go along with the charade of the community. Dane’s character is a little tougher, because when the reader first sees him through Ash’s perspective, he’s seen as almost god-like in his handsomeness. But like Quivira, Dane has a dark side, and the actor cast in this role would need to excel at playing charismatic and manipulative. Julian Morris (TV’s Once Upon a Time, New Girl, and Pretty Little Liars) could do the trick!

Our romance-themed entertainment site is on a mission to help you find the best period dramas, romance movies, TV shows, and books. Other topics include Jane Austen, Classic Hollywood, TV Couples, Fairy Tales, Romantic Living, Romanticism, and more. We’re damsels not in distress fighting for the all-new optimistic Romantic Revolution. Join us and subscribe. For more information, see our About, Old-Fashioned Romance 101, Modern Romanticism 101, and Romantic Living 101.
Pin this article to read later! And make sure to follow us on Pinterest.
By Clarissa Hadge on July 17th, 2015