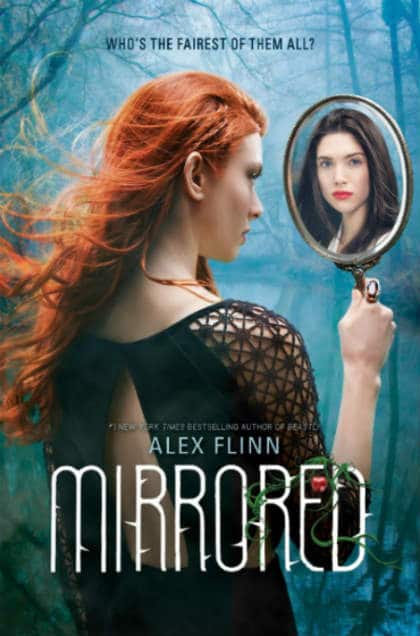 Ever since watching the film Beastly, I’ve collected Alex Flinn’s novels and have now read two of her unique fairytale retellings. She’s put a fresh spin on many with some of her novels combining more than one fairy tale into a single story. She’s also amassed quite a backlist of novels to her name tackling or commingling a good many of the beloved fables. Aside from Beastly, the only other novel I did read by her, however, was Bewitching which is a kind of continuation of Beastly, chronicling more of Kendra’s (the witch) adventures. Her latest novel also checks in with Kendra and manages to retell the Snow White fairytale.

In this version, Celine is the pseudo “Snow White,” a beautiful Florida teenager who’s stepmother, Violet, is a witch. Or Celine is at least convinced of this. Violet has been obsessed with Celine’s father Greg since they were teens. And following the death of Celine’s mother, Violet seems to have everything she wants in her grasp; that is until Celine grows up.

Once upon a time Violet was even nice to Celine… but that was before Celine became truly beautiful and the more she grew so, the more “accidents” befall Celine; everything from unexplained breakouts on her face to burns while using the curling iron. When the time comes that her life is in danger, she must rely on the kindness and protection of a new friend, but it might not be enough to outwit a stepmother who seems to have magic on her side.

The proper canon is in place within the pages of this story, but in modernizing it Alex Flinn has a great freedom and uses this to its maximum as she puts unique angles on the traditional tale. Every familiar element incorporated into the charm and humorous story that unfolds is one more layer of enjoyment we get to peel back. Between the unique introduction to the story (it begins from the antagonist’s first-person point of view) to the shifting first-person narratives in each of the three parts that make up the novel, this is likely to be one of the more memorable retellings of Snow White. Playing off the original darkness of the story, there are frightening prospects and threats and a plot to be rid of the beautiful and good-hearted heroine by the magical villainess.

However, I didn’t like everything about this novel. One minor thing, in particular, annoyed, which was a character’s name. And as far as the romance, it never fully blossoms when reading from Celina’s perspective. Though when we jump inside the male’s point-of-view, it’s the kind of love that inspires the hero to do anything for the girl he harbors an unrequited love for. Also, compared to some of the more recent reimaginings of this story, Celina is a bit… dull. This isn’t to say I didn’t enjoy her story or her as a character. No, it’s quite the opposite, I just would have liked a little more.

In all, this is a quirkier version of the fable Mirrored and is definitely a quick, easy kind of read that even the most skeptical reader can enjoy. I think the clever variations and modernizing of the story was remarkably inspired. One wouldn’t imagine a 21st-century spin set in Florida would encounter the “seven dwarfs” motif, for instance, and yet we do. The poisoned apple is even given a refreshed concept, which is in its own way, admirable. So long as you don’t mind some liberties and a unique approach to the “prince,” Alex Flinn’s latest is a heck of a lot of fun to read. There’s a sense of adventure and the humor in the writing is always evident. With each retelling Flinn tackles, there is always sass and outside-the-box thinking.

If you think of recent Snow White adaptations, you’ll have a pretty good idea of what this novel is like. Think of the bright and effervescent Mirror Mirror, the contemporary Sydney White or even ABC’s recent take on their TV show, Once Upon a Time. All of which would be excellent companions to this novel.

Our romance-themed entertainment site is on a mission to help you find the best period dramas, romance movies, TV shows, and books. Other topics include Jane Austen, Classic Hollywood, TV Couples, Fairy Tales, Romantic Living, Romanticism, and more. We’re damsels not in distress fighting for the all-new optimistic Romantic Revolution. Join us and subscribe. For more information, see our About, Old-Fashioned Romance 101, Modern Romanticism 101, and Romantic Living 101.
Pin this article to read later! And make sure to follow us on Pinterest.
By Rissi JC on September 9th, 2015