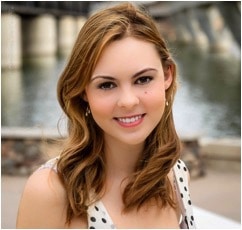 Accomplished actress Nikki Gallagher, co-lead actress in Marcus de Leon’s new film There and Back, has kindly agreed to tell is a little bit about herself. On top of being a talented actress, Nikki Gallagher also dabbles in theater production and film editing. So take a moment to check out her answers to our Petticoat Personality Test and find out her thoughts on equal representation of women and her secret fashion faves.

I cannot get enough of Uncle Jesse and Aunt Becky from Full House. I’ve loved them since I was a kid. They start out as complete opposites, but then grow and change together, and (in my opinion) become the perfect couple.

I read this book quite a while ago, but The Book Thief by Markus Zusak changed how I look at life. Zusak’s writing reminds me of poetry; every word seems to have beauty and purpose. And the story is unique, captivating, and heart wrenching. After reading it, I had a new appreciation for life.

If you could teleport/time travel to any time period, when and where would you go and why?

I would go to the future of course! I am incredibly curious about how the world will evolve and change (hopefully for the better). I would also love to get a preview of all the futuristic technology that hasn’t been invented yet.

Am I allowed to say the two lead female characters in There and Back? I guess that might be cheating, but it’s true. That’s one of the many things I admired about the script from the moment I read it. All of the characters – male and female – are complex and interesting, and none of them fall into stereotypes.

I guess I would have to answer The Wizard of Oz since I’ve loved it my whole life. But I think there are a lot of classic films out there that are incredible. It’s tough to choose just one.

Lots of movies make me cry! And not just the sad ones. The first time I watched Disney’s Brother Bear I sobbed for 15 minutes over how touching and happy the ending was. The saddest movie I’ve ever seen is probably The Crucible. I first watched that movie in my high school English class, and my friend had to keep passing me tissues during the ending and throughout the final credits.

I discovered Friends for the first time a few months ago, and I was hooked. I watched all ten seasons far too quickly for my own good.

What fashion trend do you wish would come back?

I think poodle skirts are adorable and I’ve always secretly wanted to wear one.

Who is your favorite Jane Austen Heroine?

Emma Woodhouse. She might be a little clueless sometimes, but she knows what she wants and is not afraid of going after it.

Nikki Gallagher has been performing her entire life. Nikki Gallagher is a graduate of Arizona State University’s Theatre and Bio Chemistry programs.  She plays the co-lead role of Amber Culberson in the 2015 feature film “There and Back.”  Nikki is also a theatre producer, assistant film editor and soon a resident of Los Angeles where she will pursue further film roles. You can learn more about Nikki and follow her exploits at www.nikkigallagher.com.

ABOUT THERE AND BACK

SYNOPSIS – A 23-year-old woman returns from New York to Tucson. When she discovers a sculpture her grandfather had made for her is missing, she enlists the nearly-accidental help of her adopted sister and brother to take her on an afternoon roundtrip to Phoenix to find it and buy it back. They depart on a very unexpected, totally unplanned road trip — with no money — that takes them to incredible places they’ve never seen.

Our romance-themed entertainment site is on a mission to help you find the best period dramas, romance movies, TV shows, and books. Other topics include Jane Austen, Classic Hollywood, TV Couples, Fairy Tales, Romantic Living, Romanticism, and more. We’re damsels not in distress fighting for the all-new optimistic Romantic Revolution. Join us and subscribe. For more information, see our About, Old-Fashioned Romance 101, Modern Romanticism 101, and Romantic Living 101.
Pin this article to read later! And make sure to follow us on Pinterest.
By Rebecca Lane on December 1st, 2014