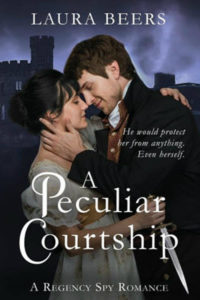 I received a free copy of A Peculiar Courtship from the author, Laura Beers, to write an honest review on The Silver Petticoat Review. I was not financially compensated for this post and all opinions are my own.

Official Synopsis of A Peculiar Courtship: Lord Jonathon Beckett’s mission is simple: retrieve Lady Hannah and place her under the protection of the Crown. But he isn’t prepared for the havoc she inflicts on his world. Suddenly, Jonathon questions whether his duty as an agent of the Crown should always come before his heart. Lady Hannah’s father has uncovered evidence exposing a French traitor to the Crown. To silence him, the traitor targets Lady Hannah. Keeping her safe means locking her away from Society. However, Lady Hannah refuses to stand idly by, letting others put their lives on the line to protect her. Instead, she will stop at nothing to learn to defend herself. Even at the risk of losing Lord Jonathon’s protection, or affections.

With a sinister scheme in play to collapse the English government from within, Lord Jonathon must protect Lady Hannah from the French spies intending to use her as a pawn in their game of treachery. But can he protect her from herself?

Saving Shadow fans will love the second book in The Beckett Files series. A Peculiar Courtship is engaging, romantic and suspenseful! Author Laura Beer continues her wonderful characterization of women. In Hannah, Beers gives us a character who knows her worth despite her lack of social connections. Raised in virtual seclusion, Lady Hannah is the daughter of an English aristocrat and Spanish mother. Hannah led a very sheltered life until forced to flee from home. However, she is not the typical damsel in distress. Hannah is intelligent and strong. For all her naïveté, Hannah has moxie and I love that about her!

Jonathon is a career spy. His job comes first. That is until he meets Hannah. His protective instincts surge to the forefront. At the same time, he loses all rational thought. In fact, Jonathon seems to forget that England’s greatest spy is none other than a woman. He, more than anyone else, is fully aware of a woman’s capabilities. So, to watch him sink to the typical overbearing male is comedic.  It results in some fantastic push and pull between Hannah and Jonathon. Understandably, Hannah feels frustrated. And she most certainly makes her feelings well-known. Hannah has the fiery passion of her Spanish ancestors. Thus, her temperament plays beautifully into throwing Jonathon for a loop.

Hannah and Jonathon’s verbal sparring on what makes a “proper lady” was so much fun to read! I enjoyed Jonathon’s bewilderment as he blundered through his feelings for Hannah. I also enjoyed how Hannah turned the tables by pointing to Eliza in support of her arguments to learn self-defense. There wasn’t much Jonathon could say to that!

The Mystery Continues in A Peculiar Courtship

Saving Shadow laid the groundwork for a French conspiracy threatening England. That conspiracy continues in A Peculiar Courtship. To avoid spoilers, I won’t say too much. Beers continues to pull from the darker side of humanity. The villain is violent, especially towards women. He is truly despicable. Beers does an excellent job developing a mostly unseen character. Further, the contrast between the villain and our heroes is wonderful. Yes, I know, this is vague. But trust me, it will all make sense when you read the book! For fans of Eliza and Benedict (me!), they’re back! Moreover, they are not there to just fill gaps. They are an integral part of Hannah and Jonathon’s story. They have a purpose and connect the two stories together.

Overall Thoughts on A Peculiar Courtship

I had a few minor gripes after reading A Peculiar Courtship. Word choice was one. For example, using “lewd” to describe Jonathon’s romantic desire for Hannah. Even considering the time period, I didn’t understand the word choice. Why was Jonathon’s desire for Hannah crude and offensive? Especially since it’s clear Hannah enjoys Jonathon’s ardor. “Shocking” (in a good way!) perhaps, but offensive? That stuck with me. Particularly because “lewd” appears again to describe the villain. Also, there were some characters that were too cliché for me. It made them flat and uninteresting. Still, this did not detract from the overall story. Especially not the lovely, swoon-worthy romantic moments. For the record, Jonathon (despite his idiotic tendencies!) was far more swoon-worthy than Benedict! Yes, I went there!

A Peculiar Courtship is a charming read! I love the extra mettle Beers gives her female characters to include minor characters (Lucy!!). The story flows effortlessly between the romance and mystery. The conspiracy has more detail and intricacy. As a result, it ends with a perfect set-up for the third installment. I look forward to what comes next for the Beckett family!

A Peculiar Courtship is available to purchase on December 1st!

Are you a fan of Laura Beers? Looking forward to A Peculiar Courtship? Sound off in the comments below!

Content Warning: There are a few scenes involving the mistreatment of women. However, they are not overly graphic.

Our romance-themed entertainment site is on a mission to help you find the best period dramas, romance movies, TV shows, and books. Other topics include Jane Austen, Classic Hollywood, TV Couples, Fairy Tales, Romantic Living, Romanticism, and more. We’re damsels not in distress fighting for the all-new optimistic Romantic Revolution. Join us and subscribe. For more information, see our About, Old-Fashioned Romance 101, Modern Romanticism 101, and Romantic Living 101.
By Catherine on November 30th, 2017