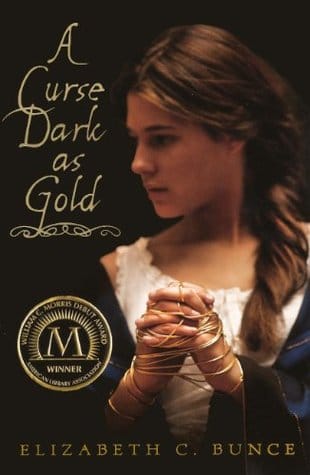 There are many books that I have discovered lately, and this novel is one of them. A Curse Dark as Gold is the debut novel of Elizabeth C. Bunke and winner of the American Library Association’s William C. Morris Award. Published in 2008, the novel is a retelling of the fairy tale “Rumpelstiltskin” set in a world based on the Industrial Revolution in Britain during the 1700s. This is one book that was impossible to put down; I read it in two days during my lunch breaks and after work.

As an avid fairytale adaptation reader, I was immediately intrigued by this title, because I hadn’t read any adaptations of “Rumpelstiltskin.” I was very excited to read this book when I got my hands on it. The story, like I said, is based on the story of “Rumpelstiltskin,” and focuses on the Miller’s daughter, Charlotte, who is not only given a name but also tells the story.

RELATED: Behind the Folk Tale: Rumpelstiltskin

Charlotte Miller and her sister Rosie are left as orphans and decide to take on the daunting task of running the family wool mill. The mill, Stirwaters, has a dark shadow over it. The line of inheritance has never gone directly from fathers to sons, because as we learn later, every Miller connected with Stirwaters in the past has lost at least one son while there.

In this case, however, the father leaves the mill to his daughters, and the girls are determined to protect both the mill and the people who work there. However, the mill has a mind of its own, and as the girls try to carry on their family’s legacy, a dark secret threatens to overshadow everything they have worked to achieve.

With the arrival of their Uncle Wheeler, who is not what he appears, the appearance of competing mills that are out to take over Stirwaters, the threat of foreclosure, the mysterious things that keep happening at the mill (both good things and sabotage), and a persistent legend that Stirwaters and the Millers are cursed, the sisters are at their wits end.

To save the mill, Charlotte and her sister Rosie enter into a bargain with the ghostly Jack Spinner, who reminds them that there is always a cost when it comes to magic. As the story unfolds, Charlotte learns the reasons that Jack displays such an interest in the mill, from looking into the past and piecing together a tragic story long forgotten. She must embark on a journey to learn the truth, both literally and within herself, to break the curse and save both the mill and the people she loves.

The main character, Charlotte, is very believable in that she is an ordinary girl who, when confronted with magic and the supernatural, behaves just like most of us would, in shocked disbelief.

The main character, Charlotte, is very believable in that she is an ordinary girl who, when confronted with magic and the supernatural, behaves just like most of us would, in shocked disbelief. Overall, Charlotte’s journey through the novel, as she learns that there are some people that she can trust (besides her sister) and that some things are worth fighting for, is beautifully woven.

The choice to tell the story through Charlotte’s eyes as a flashback means that there are moments where she is more self aware than she was at the time. This is a subtle touch, but one that I think enhances the novel. The stakes feel real because, although we know that Charlotte survives, no other character has that guarantee, and Charlotte is not perfect. She makes mistakes and, as in many wonderful books, her author does not let her off the hook.

The love story between Charlotte Miller and Randall Woodstone seems muted at first, but really it’s very sweet. The reader knows how Charlotte feels before she does, and her love for her husband and their child affects her actions throughout the novel as much as her love for her sister and the mill does. The reactions are different, but in both cases the love is deep-rooted. It also concerns Charlotte because she has something more to lose, and that is played out in her actions as the plot unfolds.

The story is, to me, sweeter for being understated. It’s more of a consistent flow throughout the story. In a lot of ways it reminds me of the main romance in Daughter of the Forest by Juliet Marillier. In both novels, the two characters love each other enough to make huge sacrifices for the other. Plus, one of them is much more aware of his feelings than the other character, and this occurs earlier in both novels.

Overall, this was an excellent novel. The pacing was great (not too fast and not too slow), the characters came alive, and the reader felt for them as their world spiraled out of control. While I often didn’t agree with Charlotte’s decisions, I understood why she made them. The stakes felt real, the threats were believable and the climax of the novel was, in my opinion, just brilliant. If you like fairy tale adaptations, historical fiction and books with female heroines who discover that they are stronger than they knew, you’ll probably love A Curse Dark as Gold.

I think this is another one of those books that would make an amazing miniseries, mostly because I think it’s too long to be a movie. Plus, I would want the film to be as faithful to the book as possible. As a book that fits into the historical fantasy genre, based on “Rumpelstiltskin,” and featuring a strong female character, I think an adaptation would be a success.

I even have some casting ideas. I was torn on this, mostly because I first thought of Sophie Turner for Rosie, but then thought that she’d really be a great Charlotte, with Willow Shields as her Rosie. I also really love the idea of Thomas Brodie-Sangster as Randall Woodstone, because he I think he can pull off the character of Randall, who is surprisingly complex. Plus, whether or not he fits most of the physical characteristics, he’s who I saw in my head.

I also picked Johnny Depp as Jack Spinner (but a carefully controlled and understated Depp, more Secret Window than Alice in Wonderland) and Tom Hiddleston as Uncle Wheeler (because he has sinisterly dashing down, as well as the other emotions Uncle Wheeler shows). For Biddy Tom, I would cast Julie Walters and I’m not sure who I would pick for Mr. Mordant or Harte.

Our romance-themed entertainment site is on a mission to help you find the best period dramas, romance movies, TV shows, and books. Other topics include Jane Austen, Classic Hollywood, TV Couples, Fairy Tales, Romantic Living, Romanticism, and more. We’re damsels not in distress fighting for the all-new optimistic Romantic Revolution. Join us and subscribe. For more information, see our About, Old-Fashioned Romance 101, Modern Romanticism 101, and Romantic Living 101.
Pin this article to read later! And make sure to follow us on Pinterest.
By Bailey Cavender on October 3rd, 2015