Who says guys can’t be tender? Here at Silver Petticoat, we love to have our hearts melted by a good bromance. I have selected 7 of my favourites (in roughly chronological order) with a “bromantic moment” for each, that I believe sums up the relationship.

One of the most ancient of classic bromances.  Jonathan, son of King Saul, becomes sworn brother to David, who the king is trying to kill.  We are told in the First Book of Samuel that: “the soul of Jonathan was knit to the soul of David, and Jonathan loved him as his own soul.” (1 Sam 18:1 NKJV)  They become sworn brothers, and Jonathan saves David’s life several times, before tragically dying in battle.  This classic tale has been represented in many ways over the centuries, but the original text still tells it best.

David & Jonathan moment
As soon as the lad had gone, David arose from a place toward the south, fell on his face to the ground, and bowed down three times. And they kissed one another; and they wept together, but David more so. Then Jonathan said to David, “Go in peace, since we have both sworn in the name of the Lord, saying, ‘May the Lord be between you and me, and between your descendants and my descendants, forever.’” So he arose and departed, and Jonathan went into the city.
1 Samuel 20: 41-42  New King James Version

Another classic bromance from the ancient world.  Achilles, son of the nymph Thetis, is the greatest warrior of his age.  Patroclus is his beloved companion.  When Achilles falls out with his overlord Agamemnon during the Trojan War, Patroclus secretly takes Achilles’ armour, fights in his stead and dies.  Achilles’ grief and rage is such that he lurches back into the fray, knowing that ultimately he goes to his own death.

My favourite retelling of this story is Madeline Miller’s The Song of Achilles.  In this version of the story, Achilles and Patroclus are lovers (as many ancient writers said they were).  Their love and friendship is as tender as can be, and is so strong that it lasts beyond death.

Achilles & Patroclus moment
A certainty rose in me, lodged in my throat. I will never leave him. It will be this, always, for as long as he will let me.
If I had had words to speak such a thing, I would have. But there were none that seemed big enough for it, to hold that swelling truth.
As if he had heard me, he reached for my hand. I did not need to look; his fingers were etched into my memory, slender and petal-veined, strong and quick and never wrong.
“Patroclus,” he said. He was always better with words than I.
The Song of Achilles by Madeline Miller (2011) pp. 95 – 96

The characters of Arthur and Merlin go back to the early Middle Ages, but I am thinking in this case of the Arthur and Merlin from the BBC TV series, Merlin.  I love the way their relationship develops through the series.  Arthur – as prince of Camelot – loves to torment Merlin, giving him dirty, time-consuming and often pointless chores to do.  Merlin subtly gets him back by trickery, and their dialogue is full of witty banter. (How long have you been training to be a pratt?/ You can’t address me like that/ I’m sorry. How long have you been training to be a pratt, my lord?) Yet underneath all that, a genuine love develops, even though it is seldom spoken.  Merlin secretly saves Arthur’s life untold times.  And the scene where Arthur dies in Merlin’s arms had us all in tears.

Arthur: Just, just…just hold me.  Please.  There’s something I want to say.

Arthur: No.  Merlin…everything you’ve done.  I know now.  For me.  For Camelot.  For the kingdom, you helped me build.

Merlin: You’d have done it without me.

Arthur: Maybe…  I want to say something I’ve never said to you before.  Thank you.

Less well-known, this pairing is from the film Farinelli, Il Castrato, which I reviewed previously on Silver Petticoat.  Musical brothers Carlo and Riccardo do everything together, even turning down an offer from Handel to stay together.  But Carlo becomes increasingly frustrated with only singing Riccardo’s compositions.  And when he finds out Riccardo had him castrated, not to save his life, but to preserve his beautiful soprano voice, their relationship falls apart, and it takes a near-tragedy to put it back together.

Carlo is lying sick in bed.

Riccardo: Carlo, eat.  You have to eat.

(He gives Carlo a posset.  Carlo has a flashback to drinking something similar as a child.  He spits it out and clutches the pillow.  Riccardo puts a hand on Carlo’s forehead.)

Riccardo: You have a fever.

Carlo: Tell me about it again.

Riccardo: Don’t start again.  It does you no good.

Carlo: That nightmare keeps coming back.  It haunts me, Riccardo.  It’s like an endless race.  I never fall off.  If I could just dream that I fall off.  Help me.

(He clings to Riccardo’s hand)

Riccardo: When our father died, you became very ill.  One day the fever was so high…you were delirious.  You went to get Helios.  That horse was a demon.  Something occurred between you two. He always led you toward danger.  Off you went on that terrifying ride.  I got there too late.  You had already fallen off.  (He strokes Carlo’s face).  Carlo.  Carlo.  We did all we could to save your life.

Carlo: To save my life.

Riccardo: To save your life.

The Lord of the Rings has many bromances within it – Merry & Pippin, Legolas & Gimli – but the most moving relationship of all must be that of Frodo & Sam.  Frodo’s loyal gardener Samwise becomes much more than a manservant as he accompanies his beloved “Mr Frodo” on his journey across Middle-earth and into the depths of Mordor.  As the Ring increasingly takes its toll on Frodo, it is Sam who keeps him going through the darkest days (and landscape).  Even when they believe all is lost, they are glad to have each other.  Their parting at the Grey Havens is heartbreaking, but we are told by Tolkien that Sam did eventually sail to a reunion with his master and friend, Frodo.  Beautifully portrayed by Elijah Wood and Sean Astin in Peter Jackson’s films.

The 1988 film Rain Man is basically a love story between two brothers.  When Charlie Babbitt finds out his father’s fortune has gone to his (previously unknown) autistic brother, Raymond, he kidnaps Raymond and takes him across America.  At first he sees Raymond as an annoying idiot.  Then he exploits Raymond’s gift with numbers to win money in Las Vegas.  But gradually, a tender love grows between the brothers, despite Raymond’s difficulty in forging any kind of human relationship.

Charlie: Now, you hear the music?

Charlie: Just watch my feet.  Raymond, watch my feet.  Here, just do what I’m doing.  OK.  See.  Feel the rhythm of the music.  We’re just moving our feet like that.  OK?  Now you’re the guy, so you’re gonna have to lead, all right?  And I’m the date, so you want to…er…you want to…er…put your left hand up like this.  Raymond, don’t stop moving.  Raymond?  Paying attention?

Charlie: OK, ‘cos you’ve got to touch someone when you dance.  I’m not gonna hurt you.  All right?  Just put it right there.  Take my hand and put it up here.  Watch my feet, Ray.  Watch my feet. The rhythm, the rhythm.  All right?  Now, when you dance you can’t watch my feet the whole time, so you’re gonna have to look up.  Now, when I tell you to, I want you to just…just look up, real slow.  Just keep moving.  OK, you ready?

7. Fitz and the Fool 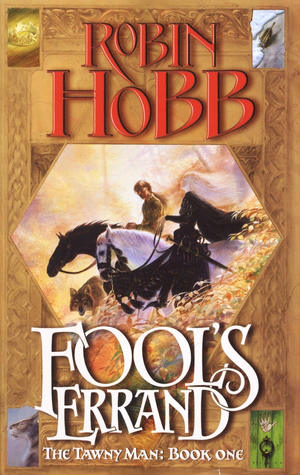 The relationship between FitzChivalry Farseer and the enigmatic Fool, Beloved, spans several trilogies of Robin Hobb’s Realm of the Elderlings novels.  Beginning when they are boys in King Shrewd’s castle, the most recent novel has Fitz in his sixties and reunited with his old friend.  Their relationship is a turbulent one.  The Fool is genuinely in love with Fitz, but must constantly use him as a Catalyst for the good of the world.  Fitz initially finds the Fool’s love disgusting, but cannot help but care for and protect him in his frailty. Together, they suffer much, and a connection forges between them, stronger than either of them know.

Fitz & Fool moment
All that night, I cradled him in my arms… I held him while he wept, and I held him after his weeping was done. I let him take whatever comfort he could in the warmth and strength of my body. I have never felt less of a man that I did so.
Fool’s Fate by Robin Hobb (2003) p. 644

Do you have a favorite bromance? Let me know in the comments!

Our romance-themed entertainment site is on a mission to help you find the best period dramas, romance movies, TV shows, and books. Other topics include Jane Austen, Classic Hollywood, TV Couples, Fairy Tales, Romantic Living, Romanticism, and more. We’re damsels not in distress fighting for the all-new optimistic Romantic Revolution. Join us and subscribe. For more information, see our About, Old-Fashioned Romance 101, Modern Romanticism 101, and Romantic Living 101.
Pin this article to read later! And make sure to follow us on Pinterest.
By Elizabeth Hopkinson on September 3rd, 2015

2 thoughts on “7 Bromances to Melt Your Heart”