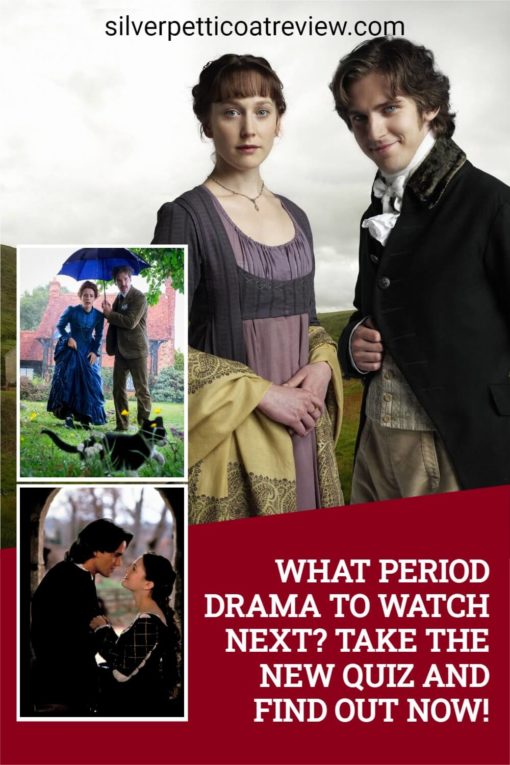 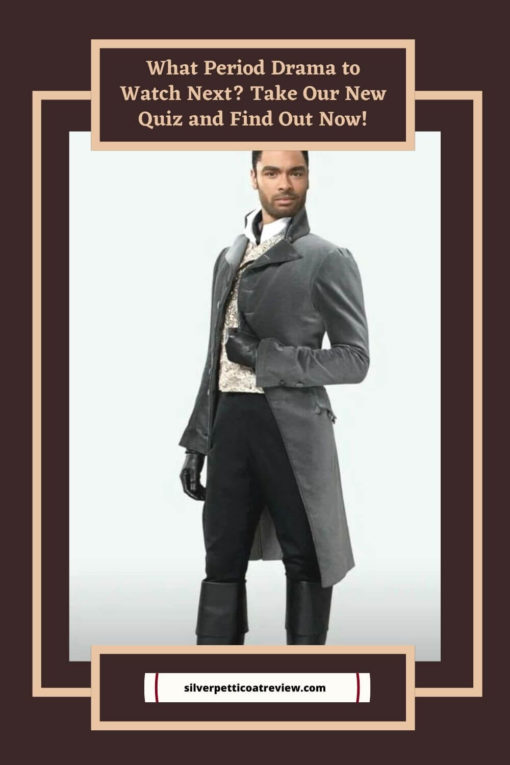 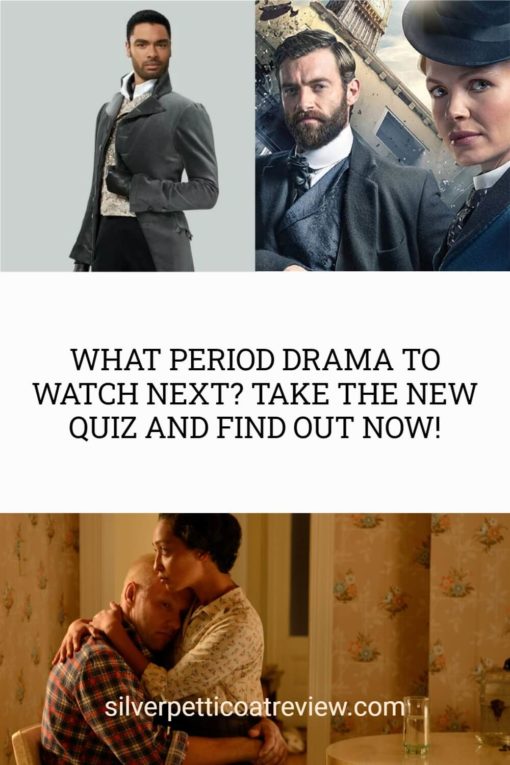 Here at The Silver Petticoat Review, we love period dramas – especially the romantic ones! One of the most common questions readers ask us is what specific period dramas we recommend for them! So, we thought it would be fun to put together a quiz that will help you know what period drama to watch next!

We came up with specific questions to lead you to your particular mood (so feel free to take the quiz as many times as you want since it’s dependent on your current mood)! Based on your answers, we can sort you into more than a dozen possibilities of results – ultimately leading you to the type of period drama you’re looking to watch.

RELATED: How Big Of A Romance Addict Are You? Find Out!

Within each result is a list of personal recommendations of period dramas!

So, take the quiz and find out for yourself what type of period drama you should watch next. Let us know what you get. Enjoy!

WHAT PERIOD DRAMA TO WATCH NEXT? TAKE OUR NEW QUIZ

In the period drama quiz, there are nineteen possible results:

You are in the mood to watch something nostalgic. You want to watch a movie or series that makes you feel warm and safe inside, from classic period dramas to sentimental period films!

A nostalgic period drama has just the right amount of comfort you crave.

Try the ‘80s adaptation of Anne of Green Gables, its spinoff series Road to Avonlea, or the 1995 adaptation of Pride and Prejudice. If a movie is more your speed, try A Room with a View starring Helena Bonham Carter or the 1994 adaptation of Little Women.

Other ideas include Dr. Quinn Medicine Woman, Sense and Sensibility (1995), Ever After, The Secret Garden (1993), or even The Sound of Music!

Do you love wit, romance, the Regency era, and everything Jane Austen? Well, you’re in the mood to watch a Jane Austen movie or show.

If you want to watch a period drama about Jane Austen, check out Becoming Jane (2007) or Miss Austen Regrets (2007).

Are you tired of watching your favorite period dramas on repeat? Do you enjoy the look and high production quality of newer movies and TV shows?

Well, a newer period drama will give you the entertainment you’re craving. Try All Creatures Great and Small (the new fabulous remake!) or The Pursuit of Love starring Lily James.

Other ideas include Bridgerton (TV-MA), The Electrical Life of Louis Wain (premiering in October 2021), The Long Song, Atlantic Crossing, The Dig, Miss Scarlet and the Duke, News of the World, Summerland, The Vineyard, Silver Skates, The Last Letter From Your Lover, The Cook of Castamar (TV-MA), The Wonder Years (remake), Jungle Cruise, or Respect.

Keep your eyes peeled for these new period dramas coming soon: Around the World in 80 Days (starring David Tennant!), The Gilded Age, The Larkins, and Leonardo (no release date in the US confirmed yet).

Are you in the mood for something other than a British or American period drama?

Try watching a Foreign Period Drama as you might be surprised by how much you love the genre while also embracing a culture different from your own.

Rookie Historian Goo Hae-ryung is an excellent example of a swoony and romantic foreign period drama from South Korea. You could also consider Empress Ki, My Sassy Girl, Scholar Who Walks the Night, and Scarlet Heart Ryeo.

Do you enjoy movies and TV shows other people haven’t seen? Do you like to take the road less traveled?

It sounds like the next period drama you should watch should be an underrated one.

Try the Australian period drama series A Place to Call Home! It is fabulous.

Other ones to try: The Inheritance (1997), The Sally Lockhart Mysteries, Middlemarch, The Abduction Club, Jamaica Inn, Effie Gray, The Tenant of Wildfell Hall, Far From the Madding Crowd, Possession, The Magic of Ordinary Days, Mr. Sunshine, Sylvie’s Love, The Testament of Youth, Horatio Hornblower, My Brilliant Career, I Capture the Castle, Ballet Shoes, Under the Greenwood Tree, or even Anna Karenina starring Santiago Cabrera.

The British period drama genre is known for exceptional scripts, authenticity, swoony romantic moments, lavish costumes, fabulous actors, and more! And that’s exactly what you’re in the mood to watch.

Is that love in the air? You’re in the mood to watch a Romantic Period Drama!

RELATED: Which ‘Sanditon’ Heroine Are You? Take Our New Quiz

A Drama Based on a True Story

Do you read about history for fun? Do you enjoy historical dramas about real people?

It sounds like watching a period drama based on a true story is right up your alley. This genre is dense with accurate settings and details right down to the number of snaps on a petticoat… and that’s the way you like it.

Of course, there are also some less-accurate period dramas based on true stories, and they’re fun to watch too!

A Period Drama Based on a Book

Are you a book lover? Do you enjoy watching adaptations of your favorite books? Do you not always have time to devote to reading, but a book adaptation keeps pace with your busy lifestyle?

Well, it looks like you’re in the mood to watch a period drama based on a book. From classics to newer novels, you love them all!

Or maybe you’d rather watch a period drama based on a newer book. There is Guernsey, Bridgerton (TV-MA), Atonement (Rated R), The Book Thief, Memoirs of a Geisha, Death Comes to Pemberley, The Princess Bride, Cold Mountain (Rated R), etc.

Are you tired of not seeing enough well-deserved period dramas with diverse casts? Well, we’ve got you covered!

Sure, there aren’t nearly enough, but diverse period dramas are finally becoming more common. And it’s about time.

Try Bridgerton (TV-MA) or Sanditon first. Then check out Call the Midwife, Anne with an E, Much Ado About Nothing (1993), As You Like It (2006), Belle, A United Kingdom, Sylvie’s Love, Loving, Oliver Twist (2007), Les Miserables (2018), Hamilton, The Personal History of David Copperfield, The Wonder Years (2021), The Frankie Drake Mysteries, Little Dorrit, Beecham House, to get started.

A Lighthearted and Fun Period Drama

Are you craving something fun and entertaining to watch? From blockbuster period dramas with adventure to historical fantasy, or even rom-coms, you’re in the mood for a lighthearted period drama.

Try Jungle Cruise, The Mummy, Pirates of the Caribbean, The Princess Bride, Ever After, Emma (1996, 2009, or 2020), Pride and Prejudice and Zombies, Lost in Austen, Doctor Who, The Abduction Club, An Ideal Husband, Reign, The Durrells in Corfu, All Creatures Great and Small, Miss Fisher’s Murder Mysteries, Agent Carter, Timeless, Northanger Abbey, Easy Virtue, A Knight’s Tale, Cold Comfort Farm, Shakespeare in Love (Rated R), A Discovery of Witches (TV-MA), The Importance of Being Earnest, or A Royal Night Out.

Is that mystery you’re craving? Try out a mysterious or gothic period drama to satisfy your mood!

If a Gothic mystery is more your speed, check out Jane Eyre, Rebecca, The Woman in White, or My Cousin Rachel.

Maybe you enjoy cleaner period dramas, or perhaps you want to watch a period drama with your entire family! Well, family-friendly period dramas are just what you’re looking for right now.

Other great choices include When Calls the Heart, The Secret Garden, Lark Rise to Candleford, Courage Mountain, Hugo, The Chronicles of Narnia, Pollyanna, Polly, A Little Princess, Cinderella, Lantern Hill, or even the underrated British period drama series, Hetty Feather.

A Drama Set in Earlier Eras

Are you tired of the abundance of period dramas set in Regency, Victorian, or the 20th-century eras?

Well, you’re in the mood to watch a period drama set in earlier times from Ancient to Baroque.

Ever After is the perfect choice if you’re in the mood for something romantic, funny, and nostalgic. A few other great options from these eras include The Ten Commandments, Goblin (a kdrama set in the past and present-day), Much Ado About Nothing, The Twelfth Night, Elizabeth (Rated R), Shakespeare in Love (Rated R), The Princess’ Man, Reign, The Pillars of the Earth, King Arthur, First Knight, A Knight’s Tale, The Other Boleyn Girl, Ophelia, Romeo and Juliet, Lady Jane, and A Discovery of Witches (TV-MA).

If the Baroque Period is more your speed, check out Cinderella, Girl with a Pearl Earring, Jamestown, Lorna Doone, or Queen Christina.

Do you watch every possible Jane Austen adaptation? Do you love the fashion of the Georgian and Regency eras?

Well, you’re in the mood for a period drama set in Georgian or Regency times.

Do you love the style of a Victorian Period Drama? The romance, the social awareness, the storytelling?

Well, here are some Victorian Period Dramas to fit your mood: Try Victoria starring Jenna Coleman – it has just the right amount of drama and romance.

Others include Belgravia, Bleak House, The Christmas Candle, Jane Eyre (1983, 2006, and 2011), The Count of Monte Cristo, Doctor Thorne, Far From the Madding Crowd (2015), The Illusionist, Lark Rise to Candleford, North & South (2004), Mercy Street, Miss Scarlet and the Duke, Our Mutual Friend…to name a few.

From the Edwardian Era to the 1980s, you’re in the mood for a 20th-century period drama.

Other ones to watch are Grand Hotel, Howards End, A Room with a View, San Francisco, Somewhere in Time, Titanic, The Remains of the Day, I Capture the Castle, Brooklyn, The Durrells in Corfu, and The Hour.

A Drama With Small-Town Charm

There is nothing quite like the warmth of a period drama set in a small town! The charm, the romance, the rural setting…It’s one of the reasons you love period dramas!

A few other small-town period dramas include Lark Rise to Candleford, Anne of Green Gables, Anne with an E, Road to Avonlea, A Place to Call Home, When Calls the Heart, Dr. Quinn Medicine Woman, All Creatures Great and Small, and Emma (2009).

Do you watch award shows for fun? Are quality scripts, award-worthy performances, fabulous costumes, and overall excellence important to you?

Well, the next period drama you watch should be critically acclaimed.

You can start with The Queen’s Gambit (TV-MA), The Crown (TV-MA), or Downton Abbey.

So, take our quiz below and find out what period drama to watch next. And let us know your results!

By The Silver Petticoat Review on October 14th, 2021