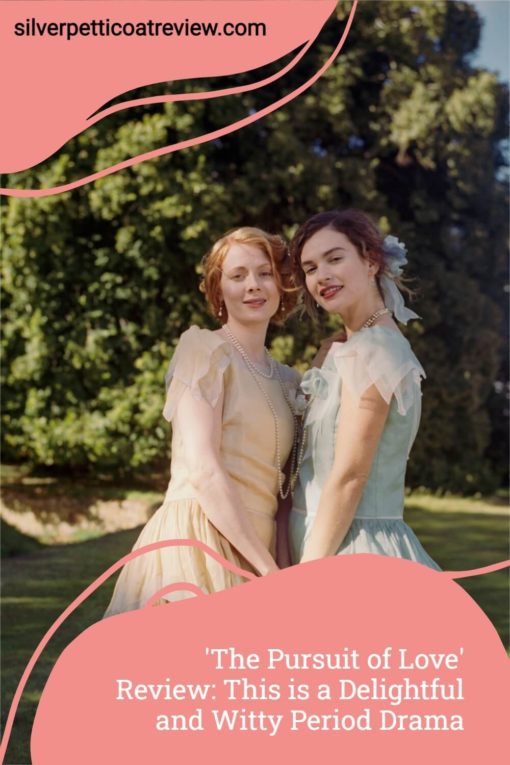 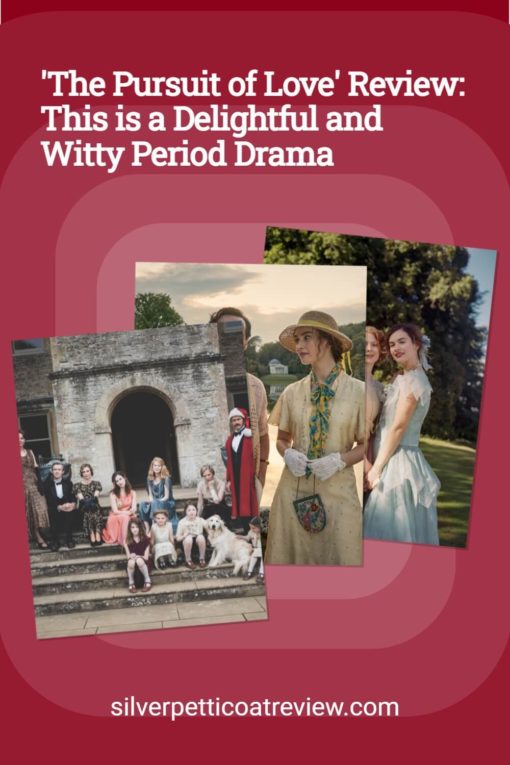 The Pursuit of Love Review:

The new British miniseries is a delightful and relevant social satire full of humor, romance, and the power of female friendship. It’s simultaneously funny and tragic with dynamic performances from the entire cast. It also has brilliant writing and directing from Emily Mortimer (who also stars as “the Bolter”).

And while the strangeness of the adaptation may not appeal to all purist fans of Nancy Mitford’s novel or the period drama genre in general, I found the series absolutely delightful due to the perfect casting, lively script, and artful direction.

The Pursuit of Love follows the friendship and love lives of the cousins/best friends, the wild and hopelessly romantic, Linda Radlett (Lily James), and the sensible Fanny Logan (Emily Beecham). Linda finds herself consumed with a desire for a passionate romance. In contrast, Fanny makes more practical choices while envying her fearless cousin.

The miniseries follow their stories from the 1920s through World War II, when women didn’t have as many opportunities available to them. In the story, you’ll meet their eccentric (and wealthy upper class) British family and friends and love interests (many based on real people from Mitford’s life) that come and go along the way.

THE PURSUIT OF LOVE REVIEW

Mortimer writes a fantastic script bringing the classic novel to life while also infusing it with a modern sensibility.

The dialogue is lively and clever, with actors executing the lines with extra vivacity – particularly Lily James. Beecham as the responsible cousin, Fanny, is just as good. She reveals an underlying passion she tries to contain due to her limited opportunities as a woman.

The supporting cast is also fantastic, with scene-stealing moments from Andrew Scott as the bohemian eccentric, Lord Merlin, Dominic West as the semi-psychotic Uncle Matthew, and Emily Mortimer as Fanny’s negligent mother, The Bolter. Scott is so entertaining in the role; one wishes there was a spinoff about just him.

Besides the intelligent script and fabulous acting, the cinematography, costumes, and art design are breathtaking.

Now, not all period drama fans will like this series. To enjoy it, you must accept the modernist style, including contemporary rock music, flashy camerawork, and artsy flair.

But I think if you enjoyed the narrative, satirical wit of the 1999 Mansfield Park adaptation and Baz Luhrmann’s The Great Gatsby, you should enjoy this period drama just fine.

THE PURSUIT OF LOVE AND ROMANCE

The Pursuit of Love is also not really a romance. So, if you’re expecting a Jane Austen love story, I would probably go in changing your expectations. Romance exists in the story, but it’s not the focus.

Linda, as a character, continues to make bad romantic choices in her pursuit of real love. And the men aren’t always appealing. But that’s how it should be in the story!

On the other hand, The Pursuit of Love is is a love story about the friendship between cousins Fanny and Linda. That’s where the power of love shines, and their bond is beautiful to watch – despite some selfishness and mistakes. Linda is an incredibly flawed character but remains relatable and sympathetic.

Overall, while it’s a unique take on the novel, The Pursuit of Love is the perfect period drama to watch this summer. I appreciated the positive female messages within the film, leaving me to wonder who Linda and Fanny would be if they grew up in today’s world with today’s opportunities.

I also hope Mortimer adapts more period dramas in the future – perhaps even a Jane Austen novel or the subsequent two novels in Mitford’s trilogy. She understands how to approach satire without becoming vulgar and has a style I like.

In a story about a young woman obsessed with love, the series surprisingly never becomes explicit or exploitative – which was refreshing.

In all, watch if you’re looking for something with wit and a whole lot of heart.

THE PURSUIT OF LOVE – WHERE TO WATCH?

The new British period drama, The Pursuit of Love, is now available to stream on Amazon Prime Video.

*The Pursuit of Love on Amazon Prime Video

What did you think of Emily Mortimer’s adaptation? Do you agree with our review of The Pursuit of Love? Discuss in the comments!