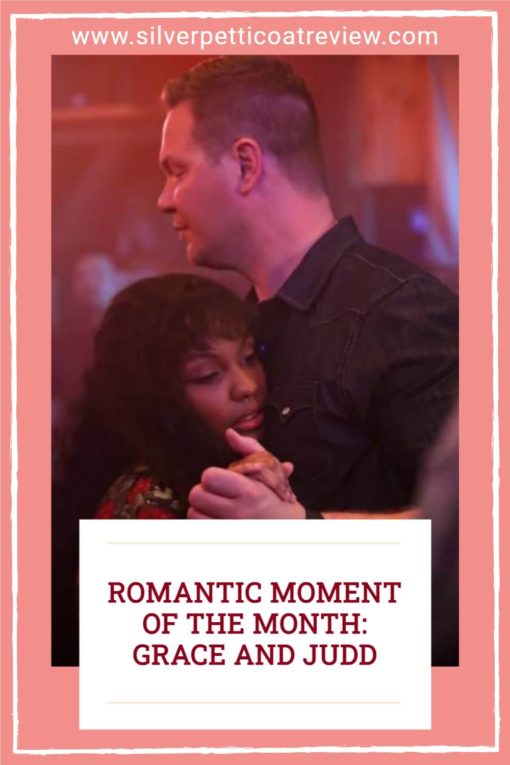 If you watched this week’s spring premiere of 9-1-1: Lone Star, then you know why we had to put the romantic spotlight on Grace and Judd Ryder. While it’s taken me longer to warm up to this series over its predecessor (9-1-1), Grace (Sierra McClain) has always been my favorite character of the series.

So, I was thrilled that Grace and Judd (Jim Parrack) were finally given the limelight for the latest episode. And it’s made me love the show all the more for it.

Before the spring premiere, the writers left fans with quite the cliffhanger: Grace and Judd were in a terrifying car accident – with them flying over a bridge into the murky waters below, not reassuring on a show willing to kill characters off.

But before I jump into the romantic moment, let’s back up a little bit!

Judd and Grace are a little unusual as a choice for us as they are already married when the series begins. But we’ve had some clues about how they got together sprinkled throughout the series – making me more curious about them as a couple.

Before this latest episode, we knew Judson Ryder was a firefighter with a tragic history. The series begins after Judd becomes the only survivor of a fire disaster that killed his entire firefighting team. He struggles with PTSD and moving on but has his supportive and empathetic wife, Grace, to help him fight through.

Then there’s Grace. We knew even less about her. She’s a 9-1-1 operator, a Christian involved in her local church, and she has a calm, understanding personality who’s able to help people through crises – including her husband.

But she’s no pushover. She’s an independent character who stands her ground – always fighting for what she believes to be right, including how others (such as her husband) should treat her. I admire her assertiveness as a character.

Before this episode, the audience learned that they began dating after being introduced by their friend, EMS captain Tommy Vega (Gina Torres). But that’s all we knew!

During the car accident, the car begins to sink into the water with Grace stuck. But before we can find out what happens to the two of them, we’re shown a series of flashbacks. First, we learn that Judd has an even greater tragic history than we realized.

When he was twelve years old, he and his friend, Cal, went joyriding, only to get into a tragic car accident – killing his best friend. With young Judd behind the wheel, he always blamed himself. But he was able to push it aside for a while anyway.

Flash forward to the year 2012. Judd is now a firefighter and living his best life until he crosses paths with an older woman on one of his calls. She sees his name on his nametag and begins to scream, refusing to have him help her.

Confused, Judd looks around her house, only to find photos of Cal, his friend who died. Realization sinks in. She is Cal’s mother, and she still blames Judd for his death.

This confrontation is the catalyst that leads to our spotlight for the romantic moment of the month.

THE ROMANTIC MOMENT OF THE MONTH: GRACE AND JUDD

Consumed by guilt and feeling lost, Judd sits alone in his car at the accident scene from his childhood. Hopeless, he picks up one of the prayer hotline cards spilled on the front seat (it reads: “Prayer in Crisis” and was given to him earlier by a woman visiting the firehouse).

Desperate, he picks up his cell phone and calls. And there on the other end…is Grace. This phone call is how they first meet.

At first, Judd is quiet, not ready or able to confess his feelings and guilt. Grace waits patiently and calls him “John” since he’s not prepared to give her his name.

RELATED: Romantic Moment of the Month: Wanda and Vision In Emotional Finale

“You said you don’t know why you made this call tonight. Do you think maybe it’s, uh, because you were led to?” Grace asks him. From an audience perspective, it does make it seem that way. The two seem fated to come together.

While it takes Judd a few minutes to open up, he hesitantly tells her why he called, confessing to how he hurt someone a long time ago and that this woman he hurt saw him today for who he was.

But Grace brings Judd back down to reality, away from his self-loathing and despair.

“Well, maybe God was giving you an opportunity to make amends.” Grace tells him.

At first, Judd doesn’t accept Grace’s advice, fearing that Cal’s mother, Mrs. Kittner, would spit on him if he tried to make amends. But then Grace swerves it back around, reminding him that he needs to be willing to be spit on.

It’s this statement that begins to change Judd’s perspective. And when Grace then reads a quote from Psalms 31 (which he later tattoos on his hand – so this works as the backstory to his tattoo and their romance), Judd softens.

“None of us are perfect. It is by grace that we are saved.” She quotes.

Of course, it’s that quote that will stay with him because her name is Grace, and in a way, she’s saving him.

After he softens, he tells her his name: Judd. She then introduces herself as Grace – and to his surprise, no, she isn’t making it up!

FALLING IN LOVE OVER THE PHONE

From there, Judd continues to call the prayer crisis hotline number, only ever willing to talk to Grace. Meanwhile, he begins making amends to Mrs. Kittner. He works on her yard, house, hoping that she will eventually be willing to talk to him.

Grace and Judd continue to bond over the phone as he develops romantic feelings for her and makes excuses to call. It’s like You’ve Got Mail but through a prayer line. It’s kind of sweet and old-fashioned.

Then, one day, Mrs. Kittner invites Judd in. It’s obvious she’s forgiven him and was touched by his selfless service to make amends. But on that same day, when Judd calls Grace to tell her the good news, he learns that Grace no longer volunteers at the prayer crisis line – leaving him disappointed.

But as their love story seems destined, it’s on this day that they first meet in person. He’s at a bar shooting pool with Tommy and a few friends when he hears a familiar voice talking in the distance.

He looks over at Grace, seeing her for the first time. Judd knows it’s her. He recognizes her distinctive voice. Judd quickly becomes enamored. Tommy, noticing his love-struck face, decides to introduce him to Grace.

When Tommy introduced Judd (an unusual name), and he speaks, Grace recognizes him too. She comments on how tall he is while Judd tells her she’s beautiful.

And with that unbelievably adorable meet-cute (their second one), they head to the dance floor.

These two don’t have to break out into awkward small chat; instead, they reflect on fate.

“What are the chances?” Judd asks.

Grace, full of faith as ever, responds with confidence: “Honestly, Judd, I’m not sure chance, uh, had much to do with it.”

“I don’t think so either.” Judd agrees.

From there, they start picking up their conversation from where they left off in the phone calls. Judd tells Grace his excellent news about Mrs. Kittner and how she forgave him.

“You changed my life,” Judd admits. “So, you know it got me thinking, if that the sort of miracle that you can work over the phone, imagine what you could do in person.”

So, Judd doesn’t waste any time! He asks Grace out. Unfortunately, she’s moving at the end of the summer to attend graduate school at Georgetown. But he’s undeterred. While she thinks it’s not good timing to start something. He disagrees.

For Grace and Judd, coming together is like a dream. Judd finds hope with Grace and begins to believe in miracles. Maybe not in the religious way Grace does, but with her, he finds hope and authentic connection, which feels like a miracle to him. She inspired him to make choices that, in turn, transformed his life.

More is revealed about their relationship throughout the episode beyond the romantic moment. Grace and Judd begin dating with the knowledge that Grace will leave soon to go to Georgetown.

Not because he’s white as Judd initially assumes but because he’s not ambitious enough and works in a regular job. Grace’s father has big plans for her. So, Judd breaks it off, convinced he’s doing the right thing.

Months later, when their mutual friend Tommy gives birth to twins, Judd and Grace once again cross paths in a hospital. Judd learns that she didn’t leave to go to Georgetown and found her calling to become a 911 operator (likely inspired by her phone conversations with him).

Well, it’s hard to deny these two are meant to be at this point. Grace is her own woman and isn’t going to live her life according to her father’s wishes. So, she goes for the job she loves and then gets back together with the man she loves.

It’s a lovely way to solidify their relationship for good.

In the present day, Judd and Grace need another miracle. Judd comes out of the car accident with minor injuries, but Grace was underwater for six minutes, so it’s unclear if she will live or if she does live if she’ll have brain damage or not.

But Judd and Grace have been through enough, so thankfully, the writers let Grace pull through. Not only with flying colors but with fantastic news: Grace is pregnant!

So, it’s a happy ending once again for Judd and Grace. It seems like grace was always meant for these two, after all.

Did you watch the episode “Saving Grace,” of 9-1-1: Lone Star? Did you love the sweet romance between Judd and Grace? Are you looking forward to what’s next? Discuss in the comments below!