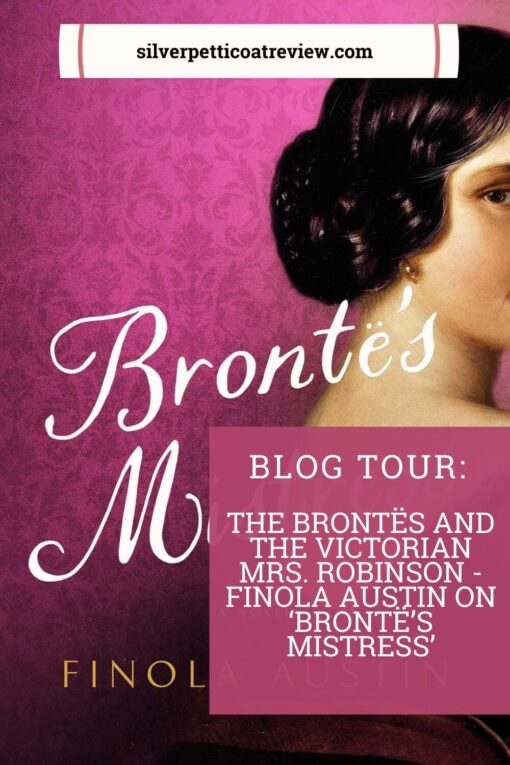 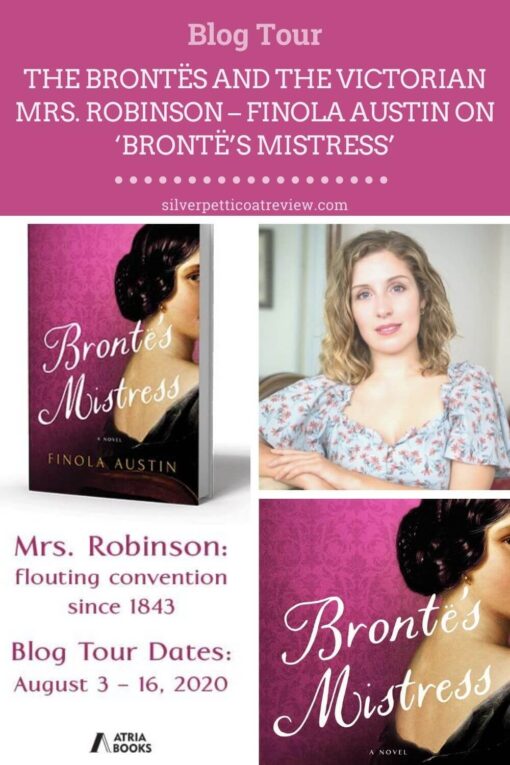 Yorkshire, 1843: Lydia Robinson—mistress of Thorp Green Hall—has lost her precious young daughter and her mother within the same year. She returns to her bleak home, grief-stricken and unmoored. With her teenage daughters rebelling, her testy mother-in-law scrutinizing her every move, and her marriage grown cold, Lydia is restless and yearning for something more.

All of that changes with the arrival of her son’s tutor, Branwell Brontë, brother of her daughters’ governess, Miss Anne Brontë and those other writerly sisters, Charlotte and Emily. Branwell has his own demons to contend with—including living up to the ideals of his intelligent family—but his presence is a breath of fresh air for Lydia. Handsome, passionate, and uninhibited by social conventions, he’s also twenty-five to her forty-three. A love of poetry, music, and theatre bring mistress and tutor together, and Branwell’s colorful tales of his sisters’ elaborate play-acting and made-up worlds form the backdrop for seduction.

But Lydia’s new taste of passion comes with consequences. As Branwell’s inner turmoil rises to the surface, his behavior grows erratic and dangerous, and whispers of their passionate relationship spout from her servants’ lips, reaching all three protective Brontë sisters. Soon, it falls on Lydia to save not just her reputation, but her way of life, before those clever girls reveal all her secrets in their novels. Unfortunately, she might be too late.

Meticulously researched and deliciously told, Brontë’s Mistress is a captivating reimagining of the scandalous affair that has divided Brontë enthusiasts for generations and an illuminating portrait of a courageous, sharp-witted woman who fights to emerge with her dignity intact.

Like many lovers of historical and romantic fiction, I read Charlotte Bronte’s Jane Eyre early in my life, and was enamoured. An unfair childhood, a brooding hero, and a wife in the attic!? Then, as a teenager, I discovered her sister Emily’s Wuthering Heights—full of angst, violence and passion. Soon, I was also reading Emily’s poetry, Charlotte’s other novels, and the two books of the youngest Bronte sister, Anne—Agnes Grey, quietly subversive, and The Tenant of Wildfell Hall, which shocked readers on its publication.

If the Brontes’ writings were extraordinary, so too were their lives. Lynne Reid Banks’s Dark Quartet was the first Bronte biography I devoured. And it was this book that introduced me to the fourth member of what I’d previously thought of as a Holy Trinity of Victorian literature—the sisters’ sole brother, Branwell.

Branwell was the Bronte sibling the family believed was destined for greatness. Like his sisters, he had artistic aspirations—to be a writer and a painter. Together, the four children, so close in age, created playworlds, the make-believe nations of Angria and Gondal, which remained the basis for many of their stories, even in their twenties. As a teenage girl, who longed to be a writer, but had left behind the imaginative play I’d enjoyed with my younger sister (a defining part of my childhood), the idea of a group of siblings who could sustain such fantasies into adulthood was fascinating.

Equally compelling was the tragedy of Branwell—the first of the four famous Bronte siblings to die, at age just 31. Branwell never achieved the success predicted for him. He died in despair, an alcoholic and an opium addict. History has blamed one woman for his demise—Lydia Robinson.

It was in 2016 that I first realized Lydia’s story was one I wanted to tell. I’d been vaguely aware of the controversy before—that Branwell Bronte, in addition to his other vices, was rumored to have had an affair with his boss’s wife. But when I at last read Elizabeth Gaskell’s The Life of Charlotte Bronte, the first Bronte biography, I was struck by the vehemence of the Lydia Robinson character assassination. This original Mrs. Robinson, 43 to Branwell’s 25 at their first meeting, was a “wretched” and “profligate” woman, who had “tempted” Branwell into sin, according to Gaskell. She suggested that, had it not been for this woman, Branwell’s death (and those of Emily and Anne) might have been prevented.

So began a year of intense research as I set out to uncover as much as I could find about the Branwell/Lydia affair, before writing a Mrs. Robinson who went beyond the older woman/younger man stereotypes. Branwell was tutor to Lydia’s son, but Anne Bronte had worked for the family even longer as the daughters’ governess. The more digging I did, the more I uncovered fertile territory for a novelist and tantalizing details about the interactions between the Bronte and Robinson households.

Whether the affair happened at all is still hotly contested in Bronte circles (no spoilers here, but for my own verdict on what’s possible, plausible and likely, see the Author’s Note at the end of my novel). Lydia actually threatened to sue Mrs. Gaskell and her publishers for libel, leading to the withdrawal of the biographer’s claims. Was Lydia a villainess or was Branwell simply delusional? Academics’ theories have been as dramatic as a plot from one of the Bronte sisters’ novels.

WOMEN WHO “DIDN’T WRITE THEIR NOVELS”

In crafting my story, my goal was clear. I’d humanize Lydia and center her in my narrative, rather than the young and troubled man her name will be linked to for posterity. My Lydia is no angel. She can be selfish and sharp-tongued. She rails against the confines of women’s position in 19th-century British society, but is certainly no proto-feminist. What could be worse, she wonders, than a woman having to work for her own living?

In some ways she’s my answer to Jane Eyre, a character I still love as I did when I first met her on the page, but now makes me pause. Charlotte Bronte’s heroines are so often poor, plain, young and virginal. But mightn’t the experiences of a wealthy, beautiful, older and sexually experienced woman matter too? Bronte’s Mistress, the book born out of this idea, is dedicated to those women throughout history who “didn’t write their novels.” Lydia Robinson was one of them.

Finola Austin, also known as the Secret Victorianist on her award-winning blog, is an England-born, Northern Ireland-raised, Brooklyn-based historical novelist and lover of the nineteenth century. Brontë’s Mistress is her first novel and is available for order now. By day, Finola works in digital advertising. Find her online at www.finolaaustin.com, or connect with her on Instagram, Facebook, or Twitter.

By The Silver Petticoat Review on August 14th, 2020

5 thoughts on “The Brontës and the Victorian Mrs. Robinson – Finola Austin On ‘Brontë’s Mistress’”