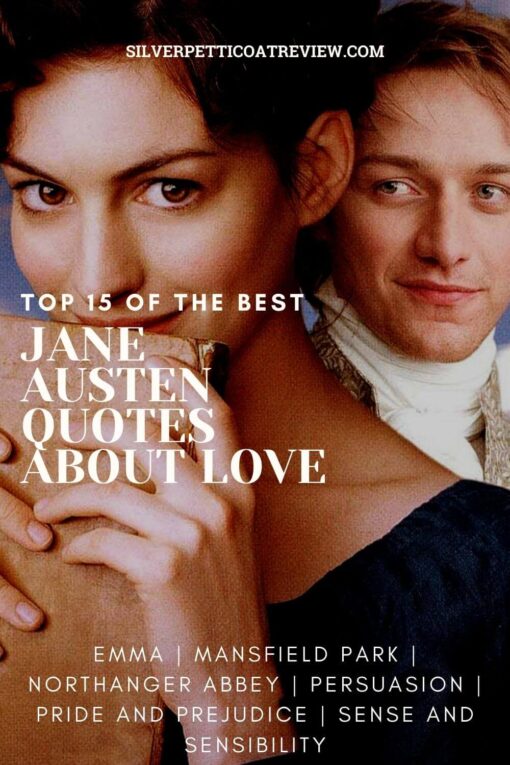 Jane Austen’s six completed novels may not always be categorized as romance novels, but she had an undeniable influence on the romance genre as we understand it today. The least of which was happily ever after endings and cerebral romantic connections between equals.

Now, Jane Austen may have never married, but she had a strong understanding of love and powerful observational skills. So, read Austen’s eloquent words (some offering useful advice), and enjoy these memorable Jane Austen quotes about love, marriage, courtship, etc. May her words inspire each of us to love more and believe in real romance!

As misguided as Emma is in her assumptions and matchmaking, she’s not wholly wrong in her heart. Emma longs for more equality in relationships and sees the unjustness of men’s expectations at that time! And the advice still rings true. You don’t have to say yes or like someone merely because they like you.

Henry speaks to Catherine in this scene as they dance together at a ball and compares dancing and marriage by using an apt analogy. This passage also reveals more of Mr. Tilney’s character and that he likes Catherine. He alludes to faithfulness in a marriage and the importance of not having a wandering eye! Tilney is both intelligent and flirtatious, making him a fun Romantic Hero to read.

While this is only a snippet of Wentworth’s romantic letter to Anne, it’s still enough to make you want to believe in true love. The letter may be one of the most passionate and swoon-worthy letters in all of literature. Who wants Darcy when there’s Captain Wentworth?

This is the moment Elizabeth begins to recognize Mr. Darcy’s Grand Gesture. She also begins to hope that Darcy’s feelings for her have not changed. He paid for Lydia’s wedding to Wickham, and in doing so, helps save her family’s reputation. Of course, Elizabeth then begins to doubt Darcy’s reasons. But the “whisper” in her heart is quite romantic! Paying attention to your heart is also good advice. The truth lies there.

Here, Elinor downplays how much she likes Edward, so as not to instill hope and expectations in her mother and Marianne’s minds. But underneath all that reserve lies deep feelings. Not everyone expresses their feelings outwardly. However, Elinor’s pent-up emotions do eventually rise to the surface. When Edward reveals he’s not married like she thought, she bursts into tears of joy and leaves the room, showing her pent-up feelings to Edward. Of course, they marry, and everything works out in the end.

Sometimes the best love comes “in time.” Marianne is a wonderful example of loving another person with her whole heart. We often forget that love should be a verb. You “love” someone else. You sacrifice and give to another person. By loving, Marianne overcomes her broken heart and helps heal the hurt and brokenness in both herself and Colonel Brandon. Marianne loves in a way that some may construe as foolish, but really once she matures, the way she loves is something to be admired.

What are your favorite Jane Austen quotes about love? Do you have a favorite movie adaptation of each book that best captures Jane Austen’s words? Let me know in the comments!