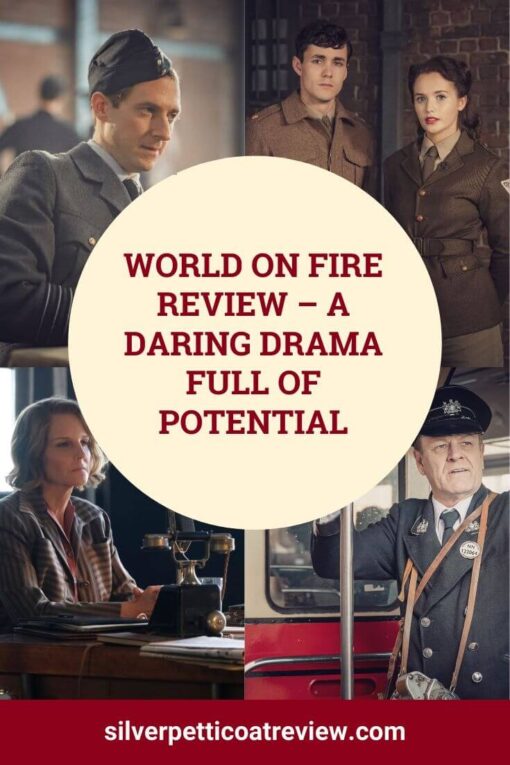 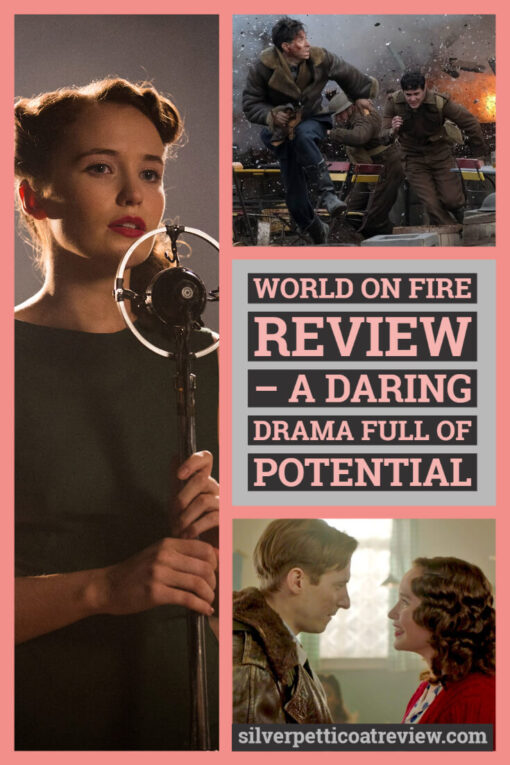 World on Fire is a historical WWII drama covering four countries and follows a large ensemble of characters in the first year of the war. The fates of these characters interweave and cross paths with one another as they all strive to survive in a new world undone by war.

Unfortunately, while this historical period drama is entertaining, the series has serious flaws. Some of the plotlines and arcs are so inane that I almost stopped watching. But the performances draw you back in, and the action holds your attention despite a few problematic detours.

World on Fire Review – What it’s About

World on Fire takes place in several countries, including Germany, England, Poland, and France, and also has American characters. While the ensemble comprises a broad set of characters, World on Fire still centers on Harry (Jonah Hauer-King), an upper-middle-class British translator, who falls for a Manchester singer named Lois (Julia Brown), a romance his mother disapproves of because she finds the class difference improper.

Their failed romance serves as a focal point to the rest of the story. However, their love story also creates unnecessary melodrama because Harry is so indecisive and secretive that I didn’t find myself rooting for Harry with anyone.

Lois and Harry part before the war begins, and he ends up in Poland as a translator. There, Harry ‘semi’ falls for a Polish girl named Kasia. When the war breaks out, Harry marries her to get her out of the country. He has no time to think of his other girl back in England. But in the attempt to rescue Kasia, he saves her little brother Jan instead. Kasia left behind, survives on her own. And her survival plot goes down as the worst arc of the entire series.

After soldiers murder her mother in front of her, Kasia loses her innocence bit by bit. With the German invasion, Kasia fights back. But instead of joining the resistance in a meaningful way, Kasia lures several German soldiers (several that are innocent mind you) by flirting with them and then getting these young boys killed.

It’s horrific and unpleasant to watch. And I don’t even have a problem with Kasia darkening her soul to survive but that this plot goes on endlessly. Seriously. It’s just so unwatchable that I couldn’t wait for the series to skip to a different character.

Thankfully, several other ensemble characters overpower the drama’s weaknesses and the uncomfortable love triangle. The three most fascinating World on Fire characters are hands down the older generation. By far, Harry’s cold mother, Robina, played by the brilliant Lesley Manville, is the most interesting. Manville acts with such depth that you can’t help but be intrigued by this seemingly unfeeling woman who is left to take care of the Polish refugee Jan.

Then there’s her strange friendship with Lois’ father, Douglas Bennet (Sean Bean). Douglas is a pacifist from Manchester. The two don’t gel but, somehow, they make a connection during the war. Their interactions are definite standouts in this historical drama.

Meanwhile, Helen Hunt also plays a fascinating woman. Nancy Campbell is an American journalist who fights to tell the truth amid German propaganda. In the meantime, she also befriends a German family.

But the Rossler family has a huge secret they must keep from the officials. Their daughter has a medical condition that puts her in danger from the extremist new regime. It’s in this danger that creates horrifying suspense. You can’t look away.

The rest of the World on Fire cast includes Nancy’s nephew. Webster lives in Paris as a doctor. Secretly gay, he falls for a black jazz musician just before Paris’ invasion. While not fully developed in the beginning, these two take a backseat until the later episodes when the Germans arrive. I’m sure Webster and Albert’s story will be even more compelling in season two.

Other characters include Lois’ troublemaker brother Tom and Kasia’s teenage brother Grzegorz. Both young men try to survive as the world explodes around them.

Look, World on Fire certainly has several failings that keep it from being great. Nevertheless, the high budget drama is definitely worth watching for high production alone.

Furthermore, there are moments of real depth that highlight the dangers of mental health during wartime. And there’s also the edge of the seat action. Not to mention, terrifying suspenseful moments when ensemble characters get placed in genuine danger.

Plus, the romances aren’t all melodrama. While, yes, I’m not fond of the Harry, Lois, and Kasia triangle at all, I did like it when Arthur Darvill enters as a sweet pilot and romantic interest for Lois. I also saw glimmers of a beginning between Robina and Douglas that I hope continues in season two.

Fortunately, the BBC already renewed the show for another season. It would have been disappointing if the series had ended on such a HUGE cliffhanger.

Overall, while imperfect, World on Fire is still worth your time, mainly thanks to the excellent performances from the well-seasoned members of the cast. Hopefully, season two will fix the flaws and come back even stronger.

Where to Watch: Stream on PBS Masterpiece’s Amazon Channel and PBS Passport. You can also buy on Digital and DVD.

What are your thoughts on the World on Fire? Do you agree with my review? Sound off below…