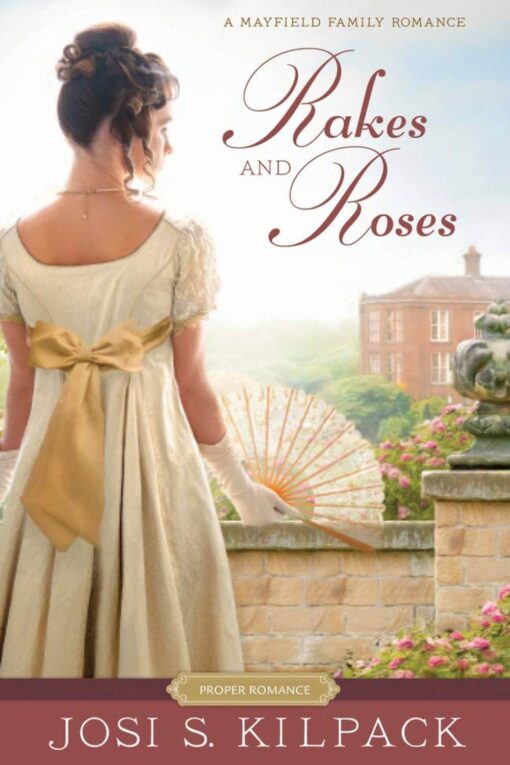 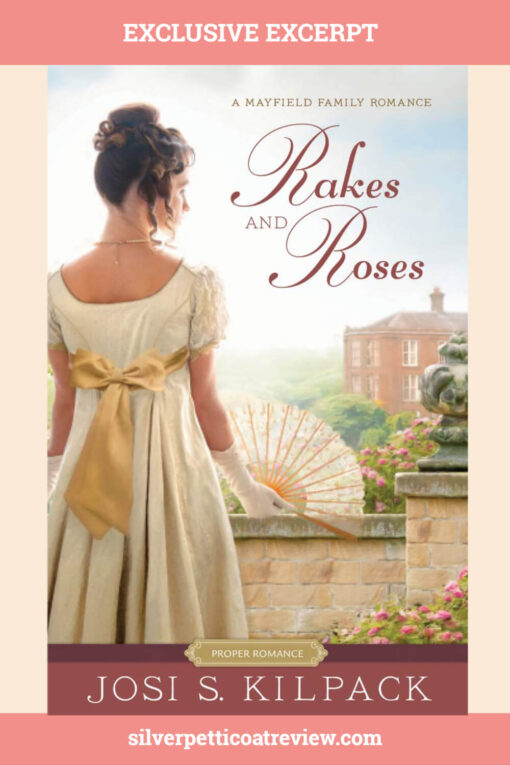 Author, Josi S. Kilpack shares an exciting excerpt with us from her new inspirational Regency Romance, Rakes and Roses.

Fans of Regency Romance, clean romance, and inspirational fiction, take note! Author Josi S. Kilpack has a brand-new standalone book in the Mayfield Family Romance series and it’s receiving excellent reviews. So, find out more about Rakes and Roses and read the exclusive excerpt below.

A standalone novel in the Mayfield Family series with an unusual premise and an uplifting ending.

Lady Sabrina endured an abusive marriage, a miscarriage, and early widowhood to emerge as a smart, successful, confident woman who found a way to make her mark in a man’s world. She has friends and purpose, but cannot hide from the emptiness she feels when the parties are over and the friends have gone home to families she will never have.

Harry Stillman may be charming and handsome, but he’s a gambler and a rake who has made a mockery of his privileges. He turns to the mysterious Lord Damion for financial relief from his debts, but still ends up beaten nearly senseless by thugs and left in an alley.

When Lady Sabrina comes upon Harry after the attack, she remembers the kindness Harry once showed to her six years ago and brings him to her estate to heal. Though their relationship begins on rocky footing, it soon mellows into friendship, then trust. But Lady Sabrina needs to keep Harry at a distance, even if he is becoming the kind of man worthy of her heart. After all, she is keeping a secret that, if exposed, could destroy everything she’s so carefully built.

EXCERPT OF RAKES AND ROSES

“This way,” Jack said as he walked through the cramped space toward another door.

Harry followed the man into the interior of a pub set with tables and chairs made of dark wood. Front windows had been greased to keep people on the street from looking inside. It was exactly the type of establishment that would run a moderate gaming hell in the basement for those patrons who knew how to gain entrance. Harry wondered for a moment if all this effort could be an elaborate way to introduce Harry to a private gaming establishment where he could be given the chance to earn enough to pay off his debt. The instant hunger for the chance reminded him of Ward’s comment that winnings were not wages.

Jack led Harry to a single chair set at a small table placed beneath a sconce on the wall—the only light in the room. On the table was a pencil and a sharpening blade. No paper.

“What of a chair for Lord Damion?”

Jack smirked and then leaned into the paneled wall, rapping three times in quick succession with his fist.

A portion of the wall set in the center of a square of wainscoting slid back, opening a space about four inches by ten inches just above the tabletop. A piece of paper was immediately slid through the opening.

Harry looked from the paper to Jack. “What is this? I was expecting to meet with Lord Damion.”

“This is your meeting,” Jack said, smiling and nodding at the paper. “Every communication with Lord Damion is writ. When all’s done and said, you’ll sign the sheets as contract between ya both.” Then he turned and walked back through the door to the kitchen without another word.

Harry considered going after him—this was beginning to feel overly theatric—but instead turned back to the paper, waiting half in the wall and half out. He sat in the chair and hesitantly took hold of the paper, which was then released from the other side. As soon as he pulled the paper clear of the gap, the door snapped shut, making Harry jump, then look around to make sure no one had observed his reaction. His nerves were so tightly wound it was a wonder he hadn’t squealed out loud at the sharp sound.

He pulled the paper closer so he could read the scrawled words written in black pencil across the top of the sheet. This meeting is an opportunity for us to finalize the details of our transaction. All communication will be written between us so there is no question as to what has been agreed upon.

Do you confirm you are Harry Stillman, only son of Horace Stillman and Jane Mayfield?

Mr. Gordon had told Harry that his situation would be investigated, but it was eerie to see his parents’ names on this page when he had not shared that information. He used the pencil to confirm the information was correct.

As soon as he set the pencil down, the partition opened. Harry put the paper into the slot, and it was taken quickly. The door slid closed with a snap. He’d need to be careful to keep from getting cut by the paper. He could hear the faint scratching of the pencil from the other side of the wall.

Harry and Ward had already deduced that Lord Damion was a nobleman; only a noble could have enough money and still need to protect his reputation from work such as this. In Harry’s experience, noblemen were not as enterprising as this Lord Damion, but perhaps that was all the more reason for him to hide his identity. Harry imagined a middle-aged man with a paunchy belly and too much time on his hands. Orchestrating this covert meeting was likely a spot of excitement in an otherwise dull life.

What would it be like to be so wealthy that you could have this type of hobby? And yet “hobby” was not the right description. Though there were certainly profits being made, the extent to which Lord Damion had already gone to in order to ensure Harry a secure future was beyond mere financial motivation or entertainment.

Harry and Ward had wondered if the man behind the Lord Damion façade was someone they knew, someone from the ton who held extravagant parties and wore the finest clothes. Except Harry didn’t know the ton anymore. He hadn’t existed in that world for a long time.

The slot opened, and the paper was pushed through. Harry took hold, aware of the moment Lord Damion released his corner from the other side, and the door closed immediately.

Josi S. Kilpack is the bestselling author of several Proper Romance and Proper Romance Historical series and a Cozy Culinary Mystery series. Her books, A Heart Revealed and Lord Fenton’s Folly; were Publishers Weekly Best Romance Books of the Year. She and her husband, Lee, are the parents of four children.

PURCHASE LINKS FOR RAKES AND ROSES: