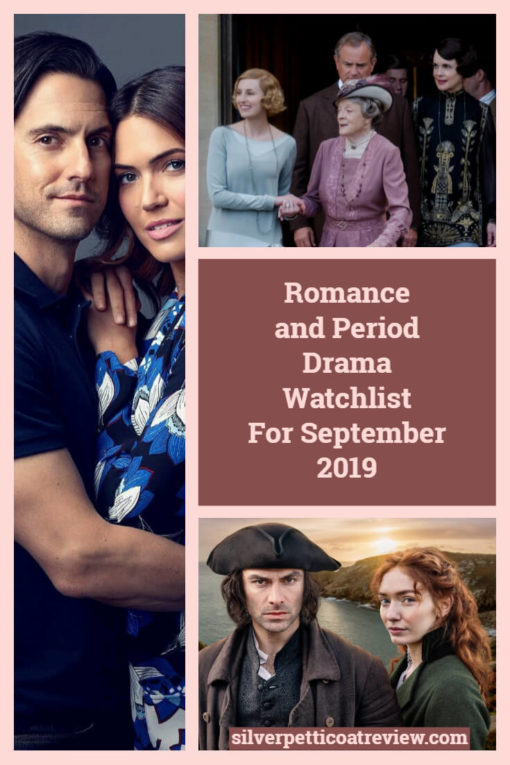 A feature letting you know what to watch in (mostly) the romance, Romanticism, and period drama genres. From TV to Streaming to Movie Releases and even Video On Demand. This month is the watchlist for September 2019.

The Downton Abbey movie is almost here! Only a couple more weeks until we’re all reunited with the beloved characters. Besides Downton, other highlights this month include the final seasons of Poldark and The Durrells in Corfu, as well as the return of the popular romantic drama/family series This is Us.

Below you’ll find watchlist highlights for premieres, new movie releases, and new VOD for September 2019. You won’t find all the repeats, movies on every paid cable channel (HBO, Showtime, STARZ, etc.) or streaming, and other extraneous content.

This watchlist is for what’s new or a special standout in the genres of romance, Romanticism, and Period Drama! So, it’s not inclusive of everything. Schedules and release dates are subject to change. Times are EST.

(NOTE: We typically aim to share less explicit content minus a few exceptions for artistic merit and/or genre interest. If a program is Rated R or TV-MA, we will let you know.)

(For a complete list of TV premieres, go HERE.)

NEW TO AMAZON PRIME VIDEO SEPTEMBER 2019: THE BEST OF ROMANCE AND PERIOD DRAMA

NEW TO NETFLIX SEPTEMBER 2019: THE BEST OF ROMANCE AND PERIOD DRAMA

What’s on your Romance and Period Drama Watchlist for September? Let me know in the comments!

(Featured Image at Top: This Is Us (NBC), Downton Abbey (Focus Features), and Poldark (Courtesy of Mammoth Screen for BBC and MASTERPIECE)