Memories of the Alhambra: How to Get Your Son and Yourself Hooked on a K-Drama 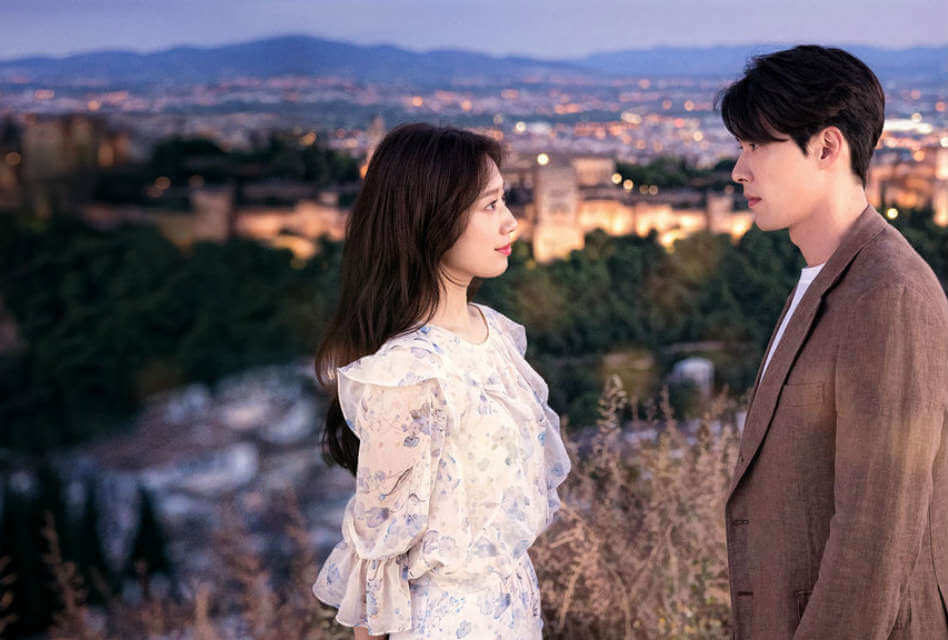 Like many K-dramas before it, Memories of the Alhambra has an epic cast and a storyline that twists and turns and flashes forward and backward. There are cliffhangers aplenty in this series of over sixteen hours.

At its heart though is a romance. The slow-burning, possibly doomed romance between the arrogant, high-flying tech innovator Yoo Jin-woo (Hyun Bin) and the demure and dutiful hostel owner and guitar maker Jung Hee-joo (Park Shin-hye).

Jin-woo ends up at Hee-joo’s hostel in Granada, Spain. And how and why this rich tech world star ends up in her rundown hostel and the aftereffects of that stay is the story in a nutshell.

This is the Computer Game that Will Never End

Jin-woo gets a mysterious call in the middle of the night at his Barcelona hotel room, a call summoning him to come to the Bonita Hostel in Granada. The call is from a young man, looking to sell an extraordinary computer game he has been developing.

When Jin-woo’s competitor is named as a possible buyer, Jin-woo’s interest is immediately piqued. He heads to Granada. But the young man never shows up.

Unbeknownst to hostel owner and responsible big sis, Hee-joo, it’s her little brother who is this programming genius. He has created an augmented reality computer game, where instead of sitting behind screens, players are out in the real world, utilizing Jin-woo’s innovative contact lenses to play in the streets and shops and squares of Granada.

The game brings to life medieval Granada, especially its warriors. Yeah, think Pokémon Go hotspots, but instead of cute little creatures to catch, players must fight assassins and soldiers and warriors and pirates and the like.

For any role-playing game aficionados out there, this game is an RPG in real life, where players walk around, find weapons, gain experience points, earn money, fight and fight some more to move up the levels.

After trying this augmented reality game himself (and getting more than a few strange looks, as he battles enemies that no one else can see), Jin-woo is sold. It has huge moneymaking potential. But his nemesis is also on the scent of this game, has also received log-in information. And still, the creator is AWOL.

The more Jin-woo plays, the more it starts to become apparent that this augmented play realm has real-life repercussions. Some rather serious and final.

Yeah, I don’t want to give it all away. But there’s a glitch in the game that starts making this augmented reality way too real. Think Tron here. Even with his lenses out and not logged in, Jin-woo becomes a permanent player, always playing, even far from the streets of Granada.

So, how does he get out, stop the game, fix this glitch, and maybe find that missing creator? See Memories of the Alhambra to find out.

Yes, the above description sounds like a fast-paced action thriller. And, indeed, in many ways Memories of the Alhambra is an action thriller. There are fight scenes aplenty (with a good amount of blood) and tons of RPG-screen shots of stats – vitality, hit points, experience, abilities, etc. Yeah, it’s pretty much like watching your son play an electronic RPG-game. And the CGI here is first rate.

But what takes this show out of pure action thriller is the amount of time given to the development of relationships. The story is continually built upon non-linearly, meaning that in every episode there are windows into the past and the future.

These windows add more and more layers to this tale. Layers which explain where characters have been and where they’re going, giving us insight into why they act as they do. It’s an incredibly engaging story-building form.

And what we learn is that there is much more to Jin-woo than a pretty face, two failed marriages, an enormous bank account with an ego to match. He ends up in Mr. Rochester territory for me – and I don’t say that lightly, diehard Rochester fan that I am.

The smarmy charms and sarcastic snipes begin to fall away. There’s a nobility there, a stoic suffering, an idealist, a man willing to take the hit, to lay down his very life to protect those dear to him. It is his mission to find the missing creator, Hee-joo’s little brother, knowing that it may very well cost him his life.

And he does this because he loves her, Hee-joo, although he never says it. She is the pure, idealistic, feisty Jane to his Rochester.

Hee-joo sees him, the goodness in him, and as much as he warns her to keep her distance, she’s there – often crying or yelling at him or both (-: And as much as he tries to distance himself from her to protect her from himself and this never-ending dangerous game, he has trouble completely keeping her at arm’s length.

Oh, it’s good stuff. Facades fall. Characters grow and reflect. And a romance flickers so tantalizingly between our two leads.

I watched Memories of the Alhambra with my tween son (the series is rated TV-MA for fight scenes). Mom’s getting her Rochester and Jane romance while son is getting a good sci-fi dose of augmented reality gaming. (Okay, I admit it, I also have a thing for butt-kicking action.) It’s a marriage made in heaven. It works and works well.

Sometimes the K-drama propensity for long, slow-mo shots got my son and I giggling. Hee-joo’s shocked big eyes got a bit infuriating at times. But it got better a few episodes in, and I know this is something of a K-drama trope.

For the most part, though, Memories of the Alhambra is a gripping, romantic, quest tale.

RELATED: GOBLIN: THE LONELY AND GREAT GOD – THIS MAY BE THE BEST SHOW YOU’LL WATCH ALL YEAR

The two leads have great chemistry. Hyun Bin as Jin-woo is the linchpin in this production, and he knocks it out of the park. He is fantastic in this role, playing the jerk, the charmer, the action star, the haunted stoic. In short, the Byronic hero – with dimples! (I have a thing for dimples – married a pair myself, which my son inherited). Oh, he shines here in this role.

In short, Memories of the Alhambra has a broad appeal. The production is high quality, and the cinematography is lovely. The acting is great, and the story is innovative. You’ll laugh, cringe, roll your eyes, question, wonder, sigh, swoon, cry, gasp, worry. You should be able to convince the male(s) in your life to see it with you without too much arm twisting.

And yeah, it doesn’t always make sense – technically – like how the heck are they trapped in a game?! And yeah, there’re many none too subtle product placements. But then Jin-woo smiles with those dimples, and I forgive and forget (-:

188shares
We use cookies to ensure that we give you the best experience on our website. If you continue to use this site we will assume that you are happy with it.OkNoPrivacy policy