One of my favorite author discoveries in recent months is Mimi Matthews. In fact, it hasn’t been that long ago that I reviewed her novel The Matrimonial Advertisement for this site. Spoiler alert…I  loved it!  Since then I’ve devoured all of her novels while I eagerly waited for the release of A Modest Independence, the second book in her Parish Orphans of Devon series.

ABOUT A MODEST INDEPENDENCE 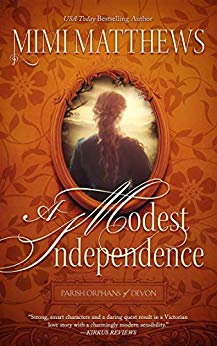 A Modest Independence follows secondary characters who were introduced in The Matrimonial Advertisement. Tom Finchley is legal advisor and friend to Justin Thornhill. It is through his relationship with Justin that he meets the fiery-haired, strong-willed lady’s maid Jenny Holloway. After Justin’s wife Helena bequeaths a large financial settlement to Jenny, she is determined to live independently.

Jenny’s life has been governed by selfish men, but she yearns for freedom and adventure. She admires and is attracted to the quietly intense Tom. But she refuses to let this influence her plans. Jenny’s curiosity and wanderlust lead her to book a trip to India. If she manages to track down the truth about Helena’s presumedly dead brother while there, then her trip will also serve a second purpose.

She was such a determined creature. So full of courage and certainty. Justin had called her a managing female, but Tom recognized what his friend could not. In the absence of family and friends, Jenny Holloway had become accustomed to relying on herself. To trusting her own judgment and valuing her own opinions. What need had she of a man?

As the trustee for Jenny’s new inheritance, all Tom knows is that he can’t allow Jenny to make such a perilous journey alone. Not only is she vulnerable traveling as a single woman abroad, but he just can’t allow this fascinating woman to leave his life.

The closer Tom and Jenny get to their destination, the closer they get to each other. Tom has never thought to marry and Jenny never wants to marry. But as they traverse thousands of miles, their attraction and intimacy grow. Will these two solitary souls resolve the conflict between love and independence?

TOM AND JENNY: WHEN AN UNSTOPPABLE FORCE MEETS AN IMMOVEABLE OBJECT

Jenny is a woman ahead of her time and I love that about her. Fiercely independent, she also wants to experience all the world holds which is something I relate too. Her personality and desires are in direct conflict with society’s expectations, but she doesn’t allow that to stop her from pursuing her dreams.

“One grows tired of waiting for knights in shining armor. Sometimes nothing will do but to rescue oneself.”

Tom’s nature is much more opaque. Growing up as a neglected orphan has taught him to strictly guard his privacy and secrets. But he’s also very thoughtful and considerate. There is much more to him than first meets the eye.

It was those eyes of his that caused her such alarming palpitations. So worn and wise—and so much older than all the rest of him. As if they’d seen everything, experienced everything. They weren’t the eyes of an overworked solicitor. Not any that she’d ever seen. No. Thomas Finchley had the eyes of a weary angel.

One of the things I appreciate about A Modest Independence is the depiction of a mature romance. Tom and Jenny treat each other with mutual respect. They are honest and vulnerable with each other about their feelings and needs. This vulnerability is inspiring. As is their pursuit of a romance even while knowing it will eventually end. In the middle of it all, both are also honest with themselves as they wrestle with the conflict between their individual desires and their growing need for each other.

It would never work between them. A woman like Jenny could no more be content trapped in London than he would be spending the rest of his life traipsing about the globe. They wanted different things—needed different things in order to thrive. Affection wouldn’t be enough. Love wouldn’t be enough. One couldn’t derive happiness entirely from another person, no matter how fond of that other person one might be. In the absence of all else, how long before such fondness turned to bitterness and regret?

As in The Matrimonial Advertisement, once again Mimi Matthews tackles social justice issues. This time it is the relationship between Britain and India and how this impacts individual citizens. Her approach is honest and balanced, neither villainizing nor white-washing either side. This gives readers a new perspective on the controversial subject of colonization.

RELATED: The Making of a Lady (2012) -A Lesser Known Story from Frances Hodgson Burnett

A Modest Independence is utterly romantic. Not just for those who enjoy a love story, but also for those captivated by the romance of travel. It’s a Victorian “road trip” which takes readers on a journey from England to Marseilles, across Egypt, to Malta and across the length of India. It’s an immersive experience following along on Tom and Jenny’s adventure. And like their relationship, it is also honest about the joys and disappointments that traveling often presents.

Once again Mimi Matthews has proven her skill as an author. She has written a tale of romance, adventure, and flawed but honest characters. Her stories make the Victorian era come alive without romanticizing it. Her ability to present the injustices and social inequality of the time with compassion and understanding gives readers a fresh and much needed realistic perspective of what daily life was like. If you like intelligently written historical fiction, then I encourage you to read A Modest Independence.

This story is well suited for the big screen where the historical settings of England, Egypt and India could really shine in a larger than life way. A good director could make an excellent period drama with modern sensibilities out of this story of a strong, determined woman. According to the author’s Pinterest page, Eleanor Tomlinson (Poldark) and Shaun Evans (Endeavour) inspired the characters of Jenny and Tom. I think that is perfect casting.

Content Note: There is nothing objectionable in A Modest Independence. This is a clean read.

Where to buy: For a list of places where this book is available for purchase, please stop by the author’s website.