The Hour: A Compelling, Intelligent Period Drama from the BBC 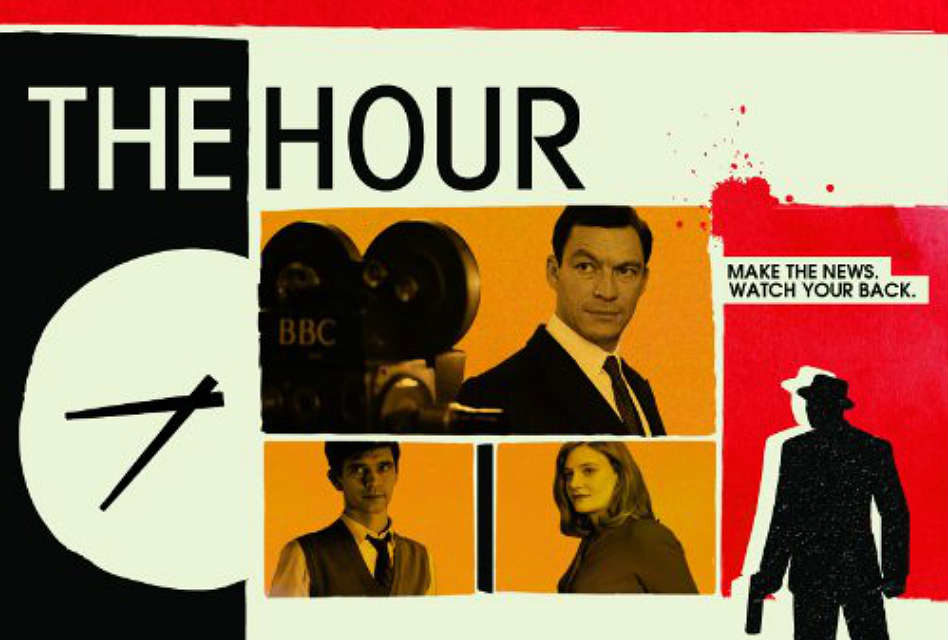 I’ve long been a fan of actress Romola Garai as well as British period dramas. So, I was thrilled when I discovered the BBC series The Hour. Not only does it feature Garai in a leading role, but it also co-stars Ben Whishaw and Dominic West. The Hour is a tautly written political and newsroom drama set in 1960’s London.

Bel Rowley (Garai) achieves her dream when she is tapped to be the producer of a televised news program for the BBC called The Hour. Joining Bel are experienced foreign journalist Lix Storm (Anna Chancellor) and Bel’s best friend and fellow journalist Freddie Lyon (Wishaw). Also, new to the team is the well-connected and handsome Hector Madden (Dominic West) who serves as “the face” presenting The Hour.

Together, along with the rest of their team, they present their weekly news program covering current events both national and international. But the investigation and presentation of this news is a fine balancing act. Not only are they constrained by an advisor from Westminster who wishes to censor any information not favorable to the government but also by criminal elements who do not want their secrets revealed.

The Hour began as a slow start for me. But with each episode, I became more and more invested. The show does a great job intermingling news, politics, mystery and the personal lives of its’ main characters.

The series consists of two seasons of six episodes each. In each season, there is the main story (or mystery) that the team is chasing which runs the length of that season. But within each episode is a smaller story which is aired on the weekly newscast from The Hour. This proves to be a smart way to provide a concise story within each episode while also keeping viewers engaged long-term.

Season one’s mystery revolves around a topic which may be familiar to viewers of The Crown. It is interesting to view the topic of Egypt’s takeover of the Suez Canal from a different perspective. Then in season two, the main storyline proves and exposes the corruption that exists within the government which is tied to a local gentleman’s night club.

Overall, I really enjoyed the focus The Hour puts on the behind the scenes production of news programming. It’s fascinating seeing all the work and detail that goes into the polished product. But what I find even more engaging is the investigation into each season’s main story, particularly since it involves criminal activity and government secrets. I found myself on pins and needles waiting for each new piece of evidence to be revealed.

A GROUP OF COMPLEX CHARACTERS

Equally as intriguing are The Hour‘s team of complex characters. Bel, Freddie, and Lix have all worked together before so adding Hector to the mix shakes their dynamic up a bit. Not to mention that Bel and Freddie have a long personal history together which appears to be a friendship without benefits.

Meanwhile, Bel’s position of authority in a field dominated by men challenges the status quo. But Freddie keeps her grounded. Freddie himself, is a bit of an odd, sometimes off-putting character. His brutal honesty, unrelenting search for truth and utter lack of interest in other people’s opinions rub many the wrong way.

Charismatic ladies man Hector brings his much-needed society and political connections to the table. Surprisingly, he proves himself to be a talented journalist, but this is often overshadowed by his troubled personal life. The maturity and years of experience Lix Storm possess adds gravitas and a unique perspective the team needs. As much as I liked the three main leads, I kept finding my interest drawn by Lix. Thankfully, season two delves more into the background of her character.

The relationships among the characters are complicated and sometimes incestuous. There are no boundaries between their professional and personal lives and many of them end up in bed together. Speaking of their personal lives, they are equally messy. In particular, is Bel’s penchant for affairs with married men and Hector’s relationship with his long-suffering wife Marnie (Oona Chaplin). It’s easy to judge their choices. However, it’s also easy to understand how the stress and strain of their jobs influence their choices and impacts their personal relationships.

The main flaw in The Hour lies in Bel and Freddie’s relationship. Their interactions bespeak a comfortability and long-term knowledge of each other. They often know what the other is thinking, finish each other’s sentences and share a passion for news and current events. It is clear to everyone else but them that there is a romantic attraction between them.

The problem for me personally is that while we see their individual backstories, we never see the background of their history together. How did they meet? Why are they so loyal to each other? These questions have no answers and it hinders the viewer’s understanding of them. Perhaps these questions were intended to be answered in a future season. Furthermore, I thought they had good chemistry together, but more as friends or a brother/sister relationship than the romantic couple the show is setting the foundation for.

Sadly, The Hour was abruptly canceled after season two leaving audiences with a tragic cliffhanger. Still, I think this is a series worth watching for its stories and characters. It’s also a profound reminder of how the intermingling of politics, government, and media is nothing new. Viewers who appreciate slower paced, intelligent dramas will enjoy this underrated gem.

Content Note: This is rated for mature audiences, thanks to its exploration of adult themes like prostitution, adultery, murder, corruption and criminal behavior. There are also a few sex scenes as well as language and violence. But it’s not a vulgar show.

Where to Watch: Stream on Amazon Prime. Buy on Vudu or on DVD.

Have you seen this underrated drama?  Do you disagree on my perspective of the Bel and Freddie relationship?

43shares
We use cookies to ensure that we give you the best experience on our website. If you continue to use this site we will assume that you are happy with it.OkNoPrivacy policy