What the Wind Knows: Romance and the Struggle for Irish Independence (I received a free copy of What the Wind Knows through the Kindle First program. I did not receive any compensation for this post and all opinions are my own)

Amy Harmon is a talented author who has penned stories in several different genres. As a fan of historical fiction, I particularly love From Sand and Ash, her WWII tale of love, bravery, and an interfaith romance. So, when I learned Harmon’s latest release was another historical offering, I couldn’t wait to get my hands on it.  As I’ve come to expect from Harmon’s novels, it did not disappoint. What the Wind Knows was a story I could not put down.

WHAT THE WIND KNOWS SYNOPSIS 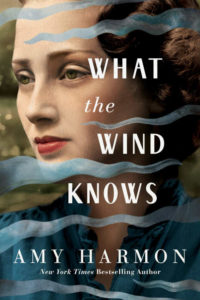 Anne Gallagher grew up enchanted by her grandfather’s stories of Ireland. Heartbroken at his death, she travels to his childhood home to spread his ashes. There, overcome with memories of the man she adored and consumed by a history she never knew, she is pulled into another time.

The Ireland of 1921, teetering on the edge of war, is a dangerous place in which to awaken. But there Anne finds herself, hurt, disoriented, and under the care of Dr. Thomas Smith, guardian to a young boy who is oddly familiar. Mistaken for the boy’s long-missing mother, Anne adopts her identity, convinced the woman’s disappearance is connected to her own.

As tensions rise, Thomas joins the struggle for Ireland’s independence and Anne is drawn into the conflict beside him. Caught between history and her heart, she must decide whether she’s willing to let go of the life she knew for a love she never thought she’d find. But in the end, is the choice actually hers to make?

I read more historical fiction than any other genre. There are certain time periods that are more popular in fiction than others. So, I was thrilled to discover the setting of this novel is 1920’s Ireland during the fight for Irish independence. This is a time which I rarely see covered. Thankfully, Harmon seamlessly weaves in real-life historical figures, like Michael Collins, with her fictional characters to create a historical narrative that vibrates with life. Her ability to create a world that feels real, transported me back in time, just like the heroine. It also gave me a better understanding of this tumultuous but fascinating time in Ireland’s recent history.

I’d often wondered, absorbed in piles of research, if the magic of history would be lost if we could go back and live it. Did we varnish the past and make heroes of average men and imagine beauty and valor where there was only dirge and desperation?

If you, like me, are a fan of Amy Harmon, then What the Wind Knows may surprise you. Like an author changeling, Harmon’s literary “voice” is much different than in her previous stories. The narrative takes on a quiet, lyrical quality which slowly saturates. Meanwhile, the drama and intensity of the events and personalities are like banked fires which don’t erupt but build into a steady climax. All of this serves to enhance the feeling that she has parted the mists of time to reveal the true Ireland.

What the Wind Knows is an interesting love story as it explores many different facets of what love is.  The most compelling of these is Anne’s unbreakable connection to her beloved grandfather. It is enough to transport Anne backward through the decades. But the complete impact of that love is only fully revealed at the end, in the cyclical nature of time.

We turn memories into stories, and if we don’t, we lose them. If the stories are gone, then the people are gone too.

Then, of course, there’s also the love of a nation: Ireland. This is most fully portrayed through the real-life figure Michael Collins and the other characters Anne rubs elbows with in the past.  Sometimes patriotism shows an ugly face. However, I appreciate Harmon reveals both sides of an argument without fully taking a side. Still, Harmon depicts Michael Collins a bit more romantically than the likely reality.

What the Wind Knows places into context the loyalty mixed with desperation in dangerous times, that leads men to risk their reputations, homes, and lives for freedom. Within that fight is the love that compatriots have not only for their cause but for each other, as the friendship between Collins and Thomas proves.

I was taught to love Ireland, but love should not be this hard. Duty, yes. But not love. Maybe that’s my answer. A man won’t suffer or sacrifice for something he doesn’t love.

Romantic love also develops between Anne and Thomas. This is complicated by Thomas’ relationships and memories with Anne’s great-grandparents, one of whom looks remarkably like Anne. As a doctor, Thomas is a man used to caring for others. This is a quality that extends into his personal life. In little ways, he betrays his growing feelings for Anne.

I told my heart I could not have her, and the Irish dissident in my blood rose up and said she was mine. The moment I surrendered, embracing the impossible, fate tried once more to take her away. Or maybe destiny simply pulled the veil from my eyes.

For her part, Anne wrestles with becoming attached to a man she may not be able to stay with. They are so careful with one another, but that doesn’t preclude their strong attraction. As they say, still waters run deep, and when these two finally admit their feelings, their love is utterly romantic in the way of small everyday things and steadfast commitment.

What the Wind Knows is not a showy book or one that instantly demands your intention. Instead, it is one which quietly draws the reader in. The novel rewards readers of patience and intelligence with a breathtaking beauty that creeps in on you. It’s a book that has something for everyone: history, drama, romance, issues for moral debate, family relationships, and more. And yet somehow all of these themes and relationships are presented with equal balance so that none overpower the other. It’s quite simply put a masterpiece.

I would love to see this book adapted into a feature film. The events of this particular time in history beg to be told across the grandeur of a big screen. In my imagination, I picture a young Harrison Ford type as Thomas Smith and Amy Adams as the time-traveling Anne Gallagher. However, if well-produced this story would also be great as a series. A series would allow for more time to explore the history and characters in greater detail.

What the Wind Knows is currently available on Amazon in all formats; ebook, hardback, paperback, and audio. For more information on Amy Harmon and her other titles, please visit her website.

Do you have any favorite historical novels set in Ireland? Have you ever read any of Amy Harmon’s novels?

58shares
We use cookies to ensure that we give you the best experience on our website. If you continue to use this site we will assume that you are happy with it.OkNoPrivacy policy