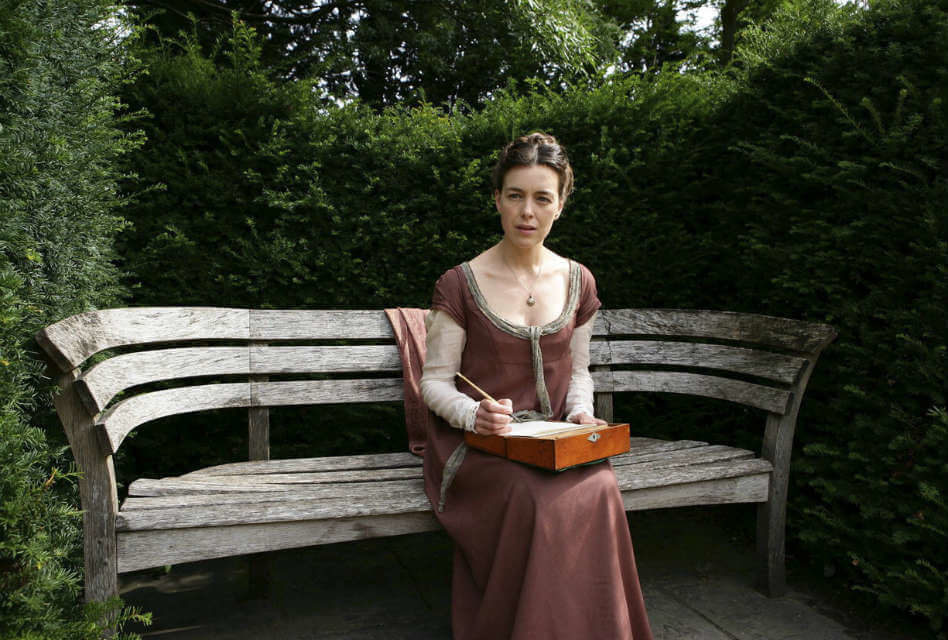 Miss Austen Regrets, a brilliantly written period drama, explores the later years of Jane Austen with gracefulness and authenticity. In an interview with the Independent,” screenwriter, Gwyneth Hughes reveals how she penned the authentic Jane Austen biopic:

“The script is based on Austen’s surviving letters to her sister and to her young niece Fanny. So I must share the credit for quite a lot of the dialogue with Miss Austen herself.”

Using Austen’s own letters and novels reveals a beautiful vulnerability and intelligent wit in Jane Austen through her own voice. What was it like for Jane as an independent woman and writer of novels? Did she ever fall in love? Did she choose this 19th-century life of spinsterhood? All questions are examined in this short but captivating period drama.

Miss Austen Regrets begins in 1802 with a proposal of marriage. At first, she accepts this offer, but then quickly changes her mind. Jane is rather independent after all. Instead of a life of marriage, Jane has chosen a single life, and some of her friends and family judge her harshly for it. Still, in the writing, there’s a celebration of her intelligence and individuality. Perhaps she chose to remain single unlike her heroines to be able to write such beloved novels like Pride and Prejudice and Persuasion?

Years later, Jane is now an Aunt, and close to her niece Fanny Knight. They talk about dancing and flirting. And Jane wants nothing more but to find a good husband for her beloved niece. Their conversations are delightful and engaging as they talk about marriage and marrying for love. Indeed, the focus on the story really is between these two interesting women at two different points in their lives.

In the meantime, Fanny falls for John Plumptre (Tom Hiddleston) then blames her Aunt Jane for ruining her prospects with him. There’s judgment, misunderstandings, and resentment on Fanny’s part. There’s also an uncomfortable somberness to Miss Austen Regrets as well. A sadness to Jane’s life because she’s so dependent on others. What would have her life been if she had chosen differently?

Despite the melancholy overtones leading to Jane’s death, there’s a beauty to Jane’s independent story and life as a whole. Even the gorgeous landscape emphasizes the beauty of the time. Yes, Jane regrets not marrying for money to help her sister Cassandra or her mother. But we also know that life would have led to other regrets.

Certainly, the film also emphasizes the lovely relationship between sisters. And while a part of the story also focuses on a flirtation with an intelligent Doctor, Miss Austen Regrets is really a film about life and the choices we make whether right or wrong rather than anything romantic. Life is a journey. And this is Jane’s story to tell. It’s a story about an independent writer, a sister, and an Aunt. There’s even an interesting friendship with a man from Jane’s past played by Downton Abbey’s Hugh Bonneville full of insightful dialogue.

Reverend Bridges: You can hide behind your clever words as much as you like.

Jane: Good, because my clever words will soon be the only thing that will put a roof over my head. Or over my mother’s. Or over my sister’s. I’m to be my own husband it seems.

Overall, while Miss Austen Regrets definitely needed more time to expand on Jane’s later life, what was offered was a gorgeous period drama about the beloved Jane Austen. Thankfully, Olivia Williams portrays Jane to perfection. She can be witty, vulnerable, bitter, and deep. We feel her emotions and believe she’s Jane Austen. When she suffers we suffer with her. It’s truly a breathtaking performance that deserves to be celebrated. While Miss Austen Regrets isn’t perfect, it’s still a worthy biopic to one of the best novelists of all time.

Where to Watch: Stream on Britbox or Amazon Prime.

111shares
We use cookies to ensure that we give you the best experience on our website. If you continue to use this site we will assume that you are happy with it.OkNoPrivacy policy