John Wayne and Maureen O’Hara are one of the most celebrated screen couples of classic cinema. Together, they made five films, three of those with legendary director John Ford. One would think that three such stubborn, opinionated and temperamental people might find it hard to create such a charming, sentimental picture like The Quiet Man. But that is exactly what they accomplished.

After decades of living in America, Sean Thornton is returning to his birthplace in the little village of Innisfree, Ireland. Most of the villagers are happy to welcome home a member of the Thornton family. That is, with the exception of Will Danaher, the local squire.

Sean and Danaher get off on the wrong foot after Sean purchases his family cottage out from under Danaher. Making matters worse, Sean also takes a liking to Danaher’s fiery-tempered sister Mary Kate.

Father Peter Lonergan, Narrator: Ah, yes… I knew your people, Sean. Your grandfather; he died in Australia, in a penal colony. And your father, he was a good man too.

While the villagers welcome him, Sean must adjust to the Irish customs and traditions honored in Innisfree. Nowhere is this culture shock felt more than in his courtship of Mary Kate. Of course, Danaher refuses to make it easy for him. And Mary Kate runs hot and cold.

Thankfully, the local matchmaker Michaleen Flynn, Father Lonergan, and the Reverend Playfair all assist Sean in adapting to his home country and in winning Mary Kate’s hand. 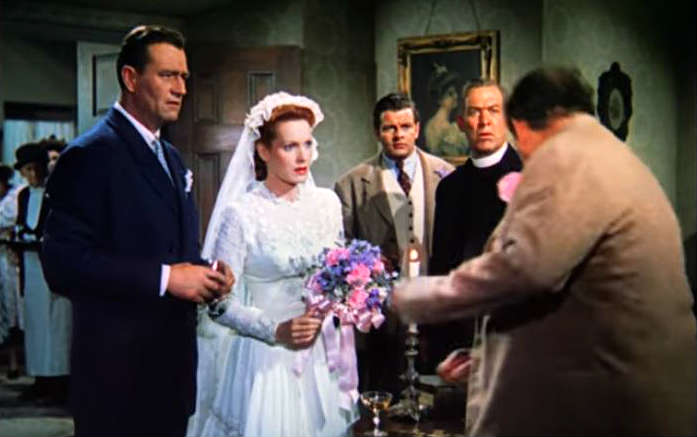 The Quiet Man just may be the most Irish movie ever made by Hollywood. It was certainly a labor of love for its director and stars. O’Hara was born in Ireland and both Wayne and Ford were of Irish extraction. Several of the supporting cast members were also Irish.

Because it was filmed on location in Ireland, the settings and the cinematography (which won an Oscar) are absolutely gorgeous. The picture is so clear and vibrant with color that it transports you to the country itself. This, of course, enhances the whole film experience, as does the spare use of Gaelic.

Though some of the personalities in the film are dramatic, this really is a quiet, contemplative film. It depicts an idealized version of life in a 1920’s Irish village with all it’s customs, traditions, and characters. For instance, the local gathering hole also known as the pub, where the men gather daily.

Sean finds the courting rituals, complete with a matchmaker, baffling. Also included are brief allusions to an earlier conflict when the Irish fought the British for their independence. However, the friendly relationship between the Catholic Father Lonergan and the Protestant Reverend Playfair downplays the tension.

The main storyline is the relationship between Sean and Mary Kate which meets resistance from her brother Will. There is also a mystery surrounding Sean’s past which creates misunderstanding and conflict with Mary Kate.

Sean Thornton is a bit of a unique role for John Wayne as he is a more reserved character averse to fighting. There is little of the machismo that Wayne was known for, but it’s a nice deviation from his normal parts.

Meanwhile, Maureen O’Hara perfectly plays the part of the feisty, strong-willed Mary Kate who is caught in between two very stubborn men whom she loves. Together, they are dynamite on screen, but they are very neatly matched by Victor McLaglen’s portrayal of the stubborn bully, Will Danaher.

Mary Kate Danaher: I have a fearful temper. You might as well know about it now instead of findin’ out about it later. We Danahers are a fightin’ people.

Thornton: I can think of a lot of things I’d rather do to one of the Danahers – Miss Danaher.

Of course, for me, the real charm of this film lies in the village itself and the quirky characters who inhabit it. In the hands of lesser supporting actors, they could easily become caricatures. Instead, they become memorable in their own right.

Many of these had worked with both John Ford and John Wayne before, so there is a real level of familiarity and camaraderie which comes across on screen. Adding to that feeling is that the filming of The Quiet Man became a family gathering. Ford’s son and daughter worked behind the scenes on the picture, while his brother had a small on-screen part. Two of O’Hara’s brothers also had supporting roles. Not to mention that the men who played the matchmaker, Michaleen Flynn and the Reverend Playfair were brothers in real life.

Overall, The Quiet Man remains a beloved film to this day for a reason. It really captures the beauty, character, and personality of Ireland and its’ people. It’s an absolutely delightful film sure to leave you wishing you were Irish.

Content Note: Rated G. However, there is some physical aggression and violence between Sean and Mary Kate which may disturb modern audiences. There is also a long, protracted fistfight between two of the male characters.

Where to Watch: Airing on TCM March 17 at 7:00PM CST. Rent/buy on Amazon, Youtube, Google Play and Vudu. Purchase on DVD.