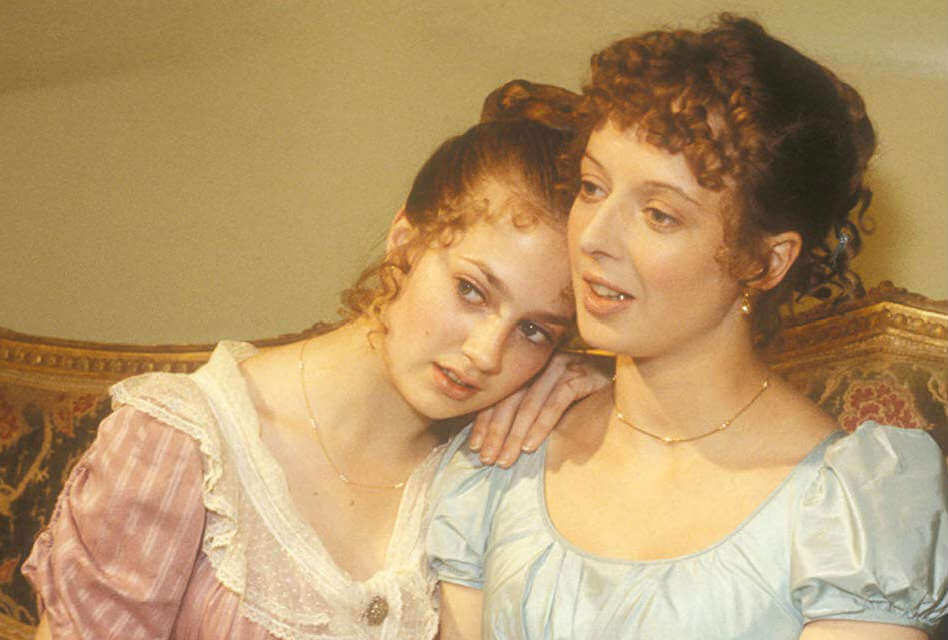 Sense and Sensibility is a seven-part, three-hour miniseries produced by the BBC in the early ’80s. Better than some earlier BBC Austen adaptations, where it’s all theatrical sets and indoor lighting, this Sense and Sensibility does benefit from the out-of-doors and natural lighting. Although there are certainly some sets as well. It also benefits from two very good leads playing the Dashwood sisters, Elinor and Marianne. The writers dropped little sister Margaret, so don’t be looking for her to show up.

Irene Richard stars as the eldest Miss Elinor Dashwood, and she is a rather captivating lead. An unconventional beauty, Richard’s Elinor makes you gravitate to her when she’s onscreen. She’s composed, gracious, steely, even gets short with Marianne at times, revealing some strong emotions under that genteel exterior.

Marianne, played by Tracey Childs, is a pretty young maid, full of romantic outbursts and moodiness, not to mention peevishness and petulance on occasion. She is only 16 after all, still immature with much growing up to do. There’s an edginess to Elinor and Marianne’s relationship, a few more sibling sparks and frictions, which I rather appreciated.

Oh, but perhaps I’m getting ahead of myself here in assuming that everyone reading this is familiar with the classic Austen tale. To be very brief, Sense and Sensibility is about Mrs. Dashwood and her eligible daughters losing their home, income and status when Mr. Dashwood dies. They relocate to a humble cottage, make new acquaintances, some suitors show up and disappear and show up again (or not), and so it goes. So, it’s about these two sisters making their way through life and finding love. The eldest eventually learning to give room and voice to her feelings and sensibilities, and the youngest learning to temper her passions and harness her feelings, using her rational sense.

RELATED: SENSE AND SENSIBILITY (1995): THE GOLD STANDARD OF AUSTEN ADAPTATIONS

But having said that, there is much to recommend this version of Sense and Sensibility. As already mentioned, the two leading ladies put in strong performances. I would actually slot Irene Richard’s Elinor in second place – just behind Emma Thompson’s (1995) and ahead of Hattie Morahan’s (2008). If I were to rank performances from the three screen adaptations of Sense and Sensibility with which I’m familiar.

The leading men are quite compelling. There’s a very fine, sensitive and handsome Colonel Brandon in the form of Robert Swann. It’s a fair-haired Willoughby in this version, played by the very fine Peter Woodward. And Bosco Hogan is a stoic and honorable Edward Ferrars. I quite liked him.

This version ups the melodrama, so there’s not so much room for humor. Although, the ridiculousness of certain characters does still shine through. Elinor gets a few more moments of righteous indignation, where (for example) she basically tells her brother to shove it. Never happened in the book, but it’s rather satisfying to see (-:

So, yeah, this adaptation of Sense and Sensibility is dated in its cinematography, flawed in its execution, but still compelling. It’s still worth a watch.

Where to Watch: DVD and Amazon Prime

Have you seen this adaptation? What are your thoughts on this Sense and Sensibility 1981 miniseries?  Let me know in the comments.