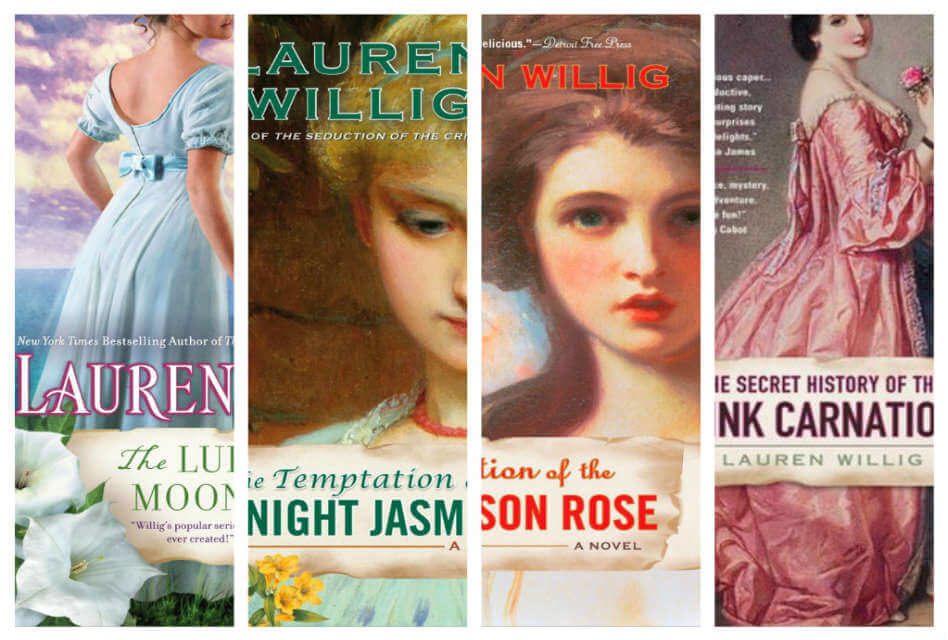 From her authorial debut until rather recently, Lauren Willig has been churning out historical fiction. Well, she still is to much acclaim and success. But from 2005-2015, she published a dozen novels in her so-called Pink Carnation series. Inspired by Jane Austen classics and Baroness Orczy’s tales of The Scarlet Pimpernel, Willig has meshed her historic interest in the Regency period (she’s a historian by way of education) with her obvious love of Austen heroines and flamboyant spies. It all comes together in her Pink Carnation series – romantic suspense historical fiction.

What if the Scarlet Pimpernel was real? Just the first and the most famous in a long line of British spies during the post-French Revolution and Napoleonic era? What if there was a whole network of spies – French and British – all with flowery noms de guerre? Fleurs de guerre, I guess. The Purple Gentian, the Moonflower, the Black Tulip, the Marigold, and, naturally the Pink Carnation. And what if instead of just lounging about drawing rooms and ballrooms, waiting for suitable suitors, women – Georgian, Austenesque women – found themselves in for a bit of derring-do? Out adventuring with some daring romantic leads?

RELATED: BOOK REVIEW: SEEK OUT THE SCARLET PIMPERNEL FOR UNFORGETTABLE ROMANCE AND ADVENTURE

So, the whole premise of the Pink Carnation series rests on a twenty-first-century historian, an American Ph.D. student. She arrives in England to research British espionage during the Napoleonic Wars. The Scarlet Pimpernel and the Purple Gentian were unmasked in their day, so much is known and written about them.

Our intrepid researcher, Eloise Kelly, is especially interested in turning up anything on the very elusive, possibly mythic (non-existent) Pink Carnation. The research is going dismally until she’s invited to look at private documents owned by the Selwick family. The Selwicks are descendants of the Purple Gentian.

She hits historical pay dirt that will rock the academic world with the Selwick papers. The Pink Carnation did indeed exist, the master spy in a network of espionage crossing continents. Eloise learns the identity of the Pink Carnation (which I won’t reveal here). And a whole intricate world of spy schools and treachery and treason and thwarted plans reveals itself. Throw into the mix a certain gruff, secretive and very sexy Colin Selwick, and Eloise embarks on a romantic adventure of her own. This modern-day romance interweaves throughout all the books.

Each novel, and again there are twelve of them, is a new story with a focus on a new set of would-be daring lovers. Although, many characters do show up again and again throughout the series. A minor character in one novel will take romantic centerstage in another and so it goes. So, there is this continuity there. That said, every book could be read as a stand-alone piece. They’re self-contained enough that it’s not necessary to be intimate with the entire series. Although it does make it a bit more fun, and there are little threads woven through every book.

With a new set of romantic leads in every novel, Willig writes a wide variety of types. From vain dandies to ice queens, from headstrong heroines to randy rogues, from fainting violets to disciplined men of honor. Yeah, all sorts of types have their tales told and their chance at romance. Dismissed and irritating minor characters in one novel often get a chance to be fleshed out and redeem themselves in another. Redeemed through knowledge of their thoughts and motivations and histories. It’s fun stuff.

The scandalous gossip and asides in an Austen novel are set a bit more center stage in the series. This is my way of saying that there are some steamy scenes in the novels. Sex occurs. But never to the point that we’re into total bodice-ripping. Although, I will put a flag on the first book, which has at least two juicy scenes. But later novels might have none or one, depending on the lead types. It varies. Yes, the descriptive explicitness of the physical intimacy does seem to dampen as the series progresses.

Willig is an academically trained historian, so her eye for historical details is sharp. You’ll learn far more about the Napoleonic Wars than you ever thought possible and have fun doing it. Unless, of course, you’re a history buff and have already studied all that. I haven’t. So, it’s entertaining and enlightening, even if things aren’t quite historically accurate. Willig always has a little historical overview at the end of every novel. She discusses what’s fact and what’s fiction, and where she took a detour and artistic licenses.

So, if you enjoy historical fiction and romantic suspense and romance and adventures and mysteries, well, Lauren Willig’s Pink Carnation series just might be your cup of tea. À votre santé! Cheers!

Turn to page 2 to see an overview of the dozen novels in Lauren Willig’s Pink Carnation series.