Sense and Sensibility (1995): The Gold Standard of Austen Adaptations 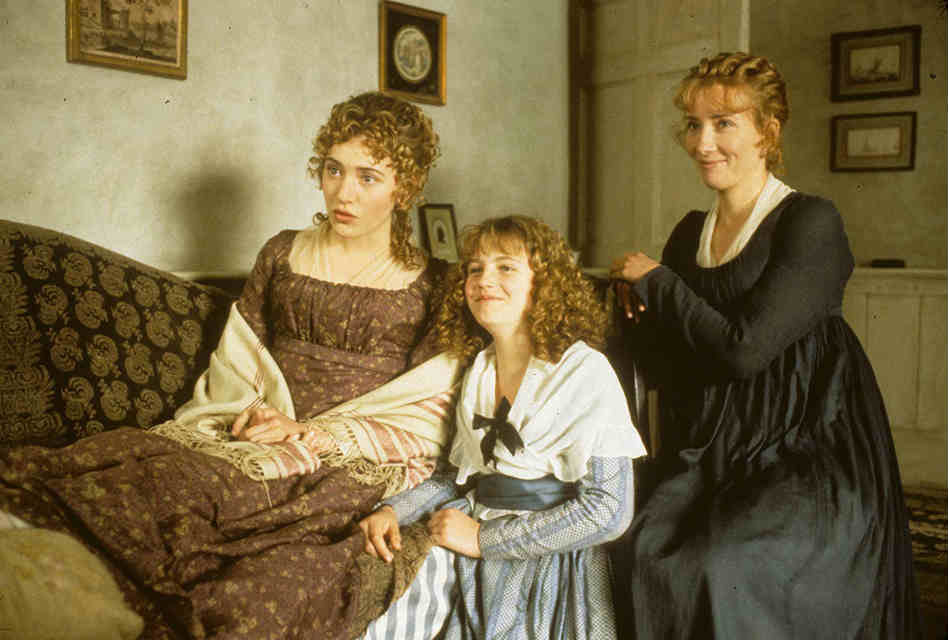 It doesn’t get much better than Ang Lee’s adaptation of Jane Austen’s debut novel, Sense and Sensibility. An adaptation that won Emma Thompson an Academy Award for best adapted screenplay. She’s the only individual, by the way, to win an Oscar for acting and writing.

The Widow and Her Daughters

Elinor (Emma Thompson), Marianne (Kate Winslet) and Margaret (Emilie François) Dashwood are the offspring of a second marriage and are entitled to no inheritance when their dear father (Tom Wilkinson) suddenly passes. The substantial family estate lands in the hands of their elder half-brother, John (James Fleet). On his deathbed, their father had made John promise to take care of his sisters. But with a greedy, social-climbing wife nattering in his ear, John reneges on that promise.

John and his wife Fanny (Harriet Walter) arrive at the family estate Norland Park post haste, making life intolerable for the grieving family. Fanny wants them out and makes many none-too-subtle comments emphasizing her displeasure at their continued presence. Widow Dashwood (Gemma Jones) seeks an abode within their much-diminished means, eventually finding a cottage in Devon on the lands belonging to a distant cousin.

In the meantime, though, Fanny’s brother, Edward Ferrars (Hugh Grant), arrives at Norland. Although initially shy and awkward, Edward’s gentleness, thoughtfulness and playful dry humor begin to shine through, especially in the presence of one Miss Elinor Dashwood. A budding romance is in the apparent works, much to Fanny’s vocal and vindictive disapproval. A woman of no means like Elinor would not be an advantageous match for her brother.

Upon departure to Devon, Edward promises to come visit them in the near future. 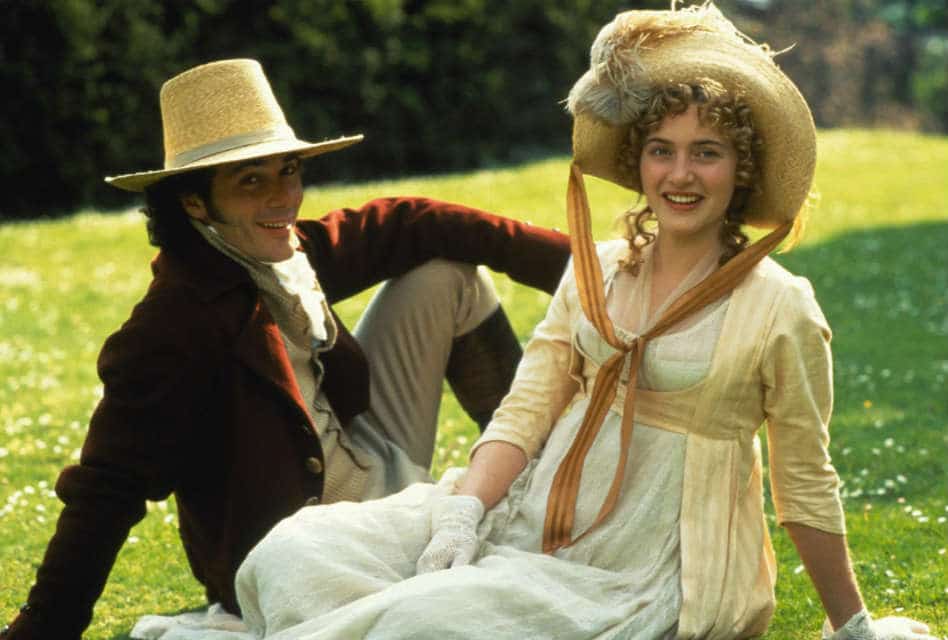 Settled in a drafty cottage in Devon, their financial and social circumstances much reduced, the Dashwoods are dependent on the rather meddling relations in Barton Park. Sir John Middleton (Robert Hardy), Mrs. Dashwood’s cousin, and his mother-in-law, Mrs. Jennings (Elizabeth Spriggs), are gregarious, boisterous and rather overwhelming busybodies, who take much interest in the new dwellers and their love lives.

Soon, they begin pushing one Colonel Brandon (Alan Rickman) towards Marianne, who caught the colonel’s eye with her passionate performances on the piano. Marianne finds him old and stuffy. And when she stumbles and sprains her ankle on a walk and is rescued by a dashing young man, well, Colonel Brandon and his attentions are promptly forgotten.

John Willoughby (Greg Wise) oozes charm and self-confidence. He and the impetuous Marianne form a fast connection, and Mrs. Dashwood and Elinor are convinced that they must have an understanding, a secret engagement. But Willoughby alights rather suddenly for London, with no plans for return. And Edward Ferrars never visits.

And I’ve already shared too much of the plot, so I’ll stop here. But suffice it to say, as with all of Austen’s works, Sense and Sensibility is about women finding themselves and love despite many hurdles. In this case, the older, responsible, pragmatic, rational Elinor finally finds room for love and passion and emotion – sensibilities – in her otherwise ordered, stoic gentility. And the overtly passionate, romantic, impetuous Marianne finds the abiding joy in qualities such as steadfastness, temperance, demureness, sense. 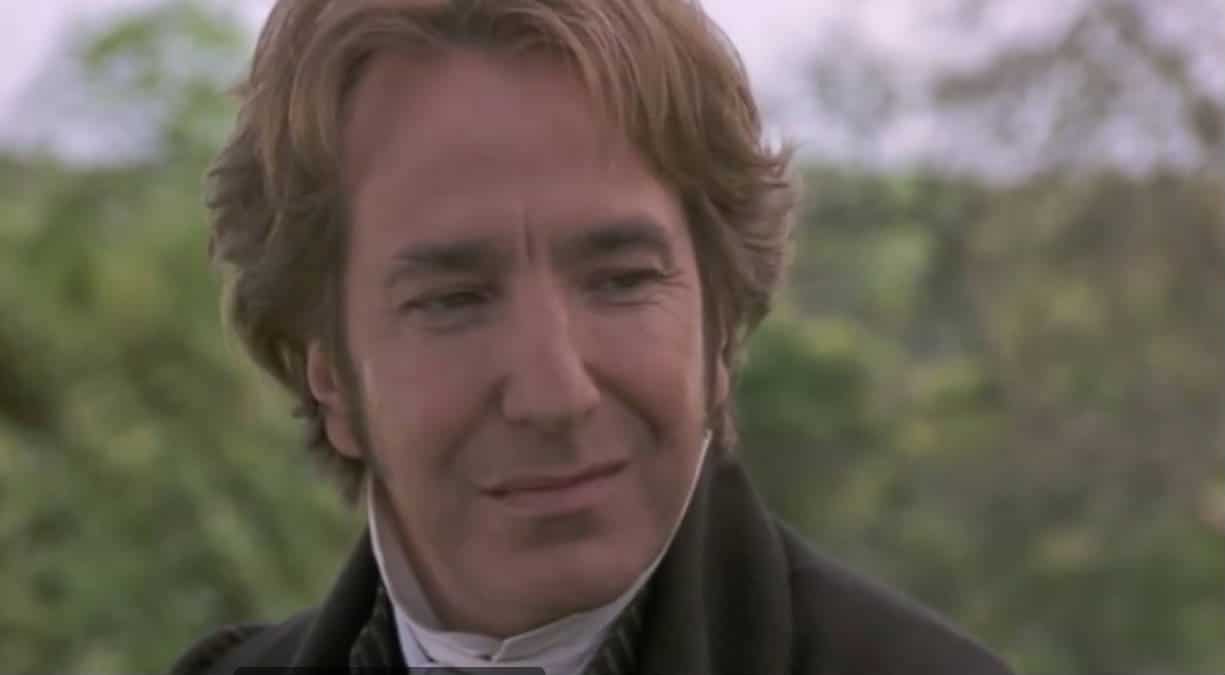 The cast in Sense and Sensibility is truly golden. All pull their weight. It is an ensemble tour de force. Emma Thompson and Kate Winslet are fantastic. This is a breakout role for a young Kate Winslet, and she has never looked back. Gemma Jones as Mrs. Dashwood is a delight. Hugh Grant is his charming, stuttering, awkward self (a role he has played many times over in his career).

The baddies are so deliciously bad that they’re delightful. Harriet Walter as Fanny is wonderful, vilely wonderful. Imogen Stubbs as Lucy Steele is a cloying, manipulative piece of work. So very well done. And Greg Wise, oh, Greg Wise will always and forever be Willoughby, the rogue we all hate to love and love to hate. Wise makes Willoughby so incredibly likable despite his dastardliness. And to cast Alan Rickman, the man who often played villains, as the steadfast love interest, well, that was genius, a revelation in itself. So, so good.

RELATED: TO REDEEM OR NOT TO REDEEM A RAKE – GUEST POST BY CHRISTINA BOYD

Even very minor and supporting characters are fantastic. Hugh Laurie as the acerbic husband to Imelda Staunton’s chattering nitwit is so fun. And his slight reveal of his genuine concern for an ailing Marianne is such a tender moment in the film. Oh, the whole cast shines. But I would be very remiss if I didn’t mention Elizabeth Spriggs as the overwhelmingly nosey Mrs. Jennings. She is a scene-stealer, so over-the-top and incorrigible, but with this heart of gold. Larger-than-life, she’s larger-than-life and lovely and lovable, despite all her meddling.

Yes, Emma Thompson and Ang Lee’s Sense and Sensibility is wonderful. Sure, there are characters dropped, and scenes condensed and added, but it shines through with that Austen essence of wit and humor and social critique and love, much love. It is so very well done, truly the gold standard of Austen adaptations.

507shares
We use cookies to ensure that we give you the best experience on our website. If you continue to use this site we will assume that you are happy with it.OkNoPrivacy policy