There’s a reason why British produced series do so well as U.S. imports. It’s a simple, but effective one: they’re just that good. One of these series is Acorn’s Agatha Raisin, a delightful show about a woman who solves murder mysteries!

Things haven’t gone exactly as Agatha Raisin (Ashley Jensen) planned. Just as she makes the adjustment from life in London’s fast lane to the quiet village life, her world again turns upside down. You see, she was about to marry James (Jamie Glover) when suddenly her ex-husband reenters the picture and ruins their I Dos. Then to make matters worse, as Agatha chases James to the ends of the earth, she becomes entangled with his philandering best friend, Charles (Jason Merrells). Needless to say, our favorite sleuth is in quite a pickle.

As a means of distraction, the suspicious activity going on in Cotswold’s hair salon outshines Agatha’s return. Together with her trusty companions, Agatha is back on the job – all while trying a new coif!

Sometimes there are shows that make you wish for an endless supply of episodes. Agatha Raisin is one of these. Each installment is better or as good as the last, and Ashley Jensen creates a character we can love, flaws and all. When I learned there’d be no more episodes in this series after season one, my TV fangirl heart was devastated. That is, until news broke that Acorn’s streaming service greenlit further episodes. These run about 90 minutes, and though there’s only three in “series two,” today we’re talking about the first two. 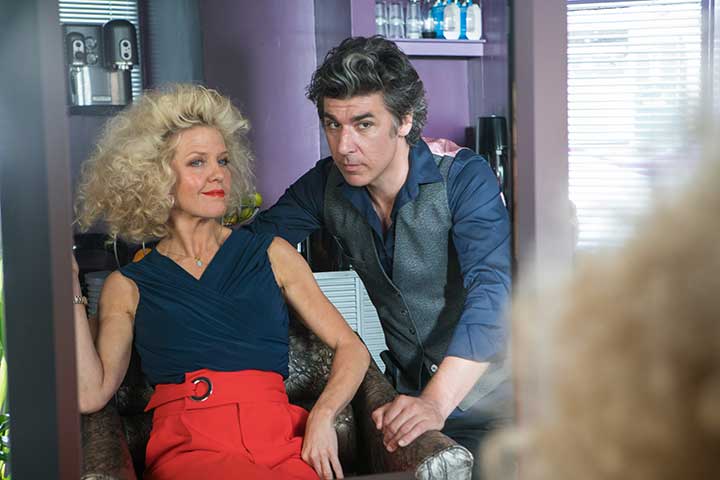 In the first installment ‘Agatha Raisin and the Wizard of Evesham,’ Agatha is embroiled in the life of a popular hairdresser; and in the second ‘Agatha Raisin and the Fairies of Fryfam’ her retreat (aka her escape from James) takes her to a small village where locals lay claim to faeries, and a barmaid enchants all the men. Both are equally entertaining, and I love that we get to again hang out with the gang. Agatha is all sass and hilarity; Bill is his usual earnest self; Sarah is the “mother hen” of the bunch; Jem is still muddling through life without Mr. Right; and of course, Roy is just Roy!

This then brings me to the cast! While a few faces are missing (like Sarah’s husband and Jem’s daughter), the bulk of the primary cast returns. The cast helps in making the return so successful given how well we viewers liked this gang of amateur sleuths from the first series (originally on Sky). We continue to watch Jem and Bill squabble, and their attempt to ensure no one is hurt. Also, may I just say, Bill is the cutest detective ever.

If you enjoy the period drama equivalent (like Miss Fisher’s Murder Mysteries or Marple), then chances are, you’d enjoy Agatha Raisin. It’s full of quippy one-liners, and a heroine who though flawed is impossible not to like.

Content Note: There are some innuendo and suggestive scenes. But nothing graphic; the show is not rated.

Where to Watch: You can watch Agatha Raisin (2019) Series Two on Acorn TV or Amazon with an Acorn TV membership!