Gorge yourself on an epic two-course meal comprised of two adaptations of Elizabeth Gaskell’s rich and meaty classics.

Dessert: North & South (2004 – 235 minutes) – Oh, the running time for this one might just be extended, when you find yourself lingering over that final delicious kiss at the train station at the end. And just rewinding to see it one more time. And maybe one more time again. Oh, and again. It’s addictive viewing, this tale of the proper young lady and the rough-around-the-edges industrialist. Starring Daniela Denby-Ashe and Richard Armitage.

While the palette may be muted, the stories of these film delights are anything but. Crunch on some classics.

Starter: I Know Where I’m Going (1945 – 88 minutes) – Sink your teeth into this delectable gem about life and love happening, while a stubborn woman is busy making other plans. Starring Wendy Hiller and Roger Livesey.

RELATED: I KNOW WHERE I’M GOING (1945): WHEN THE BEST-LAID PLANS GO ASTRAY

Side (Optional): The Elephant Man (1980 – 124 minutes) – Lubricate the meal with a teary, period biopic of the deformed, sideshow freak, John Merrick. And learn about the beauty of souls. Starring John Hurt, Anthony Hopkins, and Anne Bancroft.

Dessert: Sabrina (1954 – 113 minutes) – Lick your lips on this yummy pic on the little girl grown up, whose plans for love might just be derailed. Starring Audrey Hepburn, Humphrey Bogart, and William Holden.

Just do it! Re-watch the entire six-episode, BBC miniseries of Pride & Prejudice (1995), starring Colin Firth and Jennifer Ehle. Lap up the longing looks and the tantalizing brief touches. Sigh.

Films for the foodie and cinematic delights for the discerning gourmand. Why not take this take these film menus rather literally and watch films about food and life and love? Yum!

Starter: The Lunchbox (2013 – 105 minutes) – Spice up your life with this exotic delight. An errant lunchbox is the start of a beautiful and meaningful relationship between two lonely souls. Starring Irrfan Khan and Nimrat Kaur.

Dessert: Chocolat (2000 – 121 minutes) – Feast on this fable of gastronomic pleasures, of the joys and passions that can arise from a good piece of chocolate. Starring Juliette Binoche and Johnny Depp. 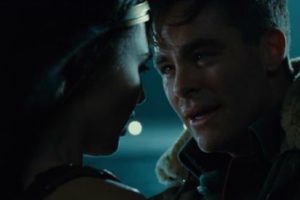 Craving some heroic action with a good side of bittersweet romance? Hail the lovelorn superheroes.

Starter: Wonder Woman (2017 – 141 minutes) – Love in a time of war never seems to have a happy ending, especially if you’re a demigod on a mission to save the planet from the god of war. Soak up the tender moments between Steve and Diana while you can, before duty calls. Starring Gal Gadot and Chris Pine.

Main: Captain America: The First Avenger (2011 – 124 minutes) – “I had a date.” Oh, it’s a bittersweet awakening for the man on the ice, whose slow-burn romance with Agent Carter never culminated in anything. Alack and alas. Being buried in ice for decades really does put a damper on burgeoning love. Sate your sorrows in some chocolate. Starring Chris Evans and Hayley Atwell.

Dessert: Superman (1978 – 143 minutes) – A super man who rewinds time to save the woman he loves? Pour me some of that, please. Savor this heroic classic. Starring Christopher Reeve and Margot Kidder.

Is anime your game? Well, how about ringing in the new year with a feast for the eyes from some of Japan’s great animators.

Main: Only Yesterday (1991 – 118 minutes) – Raise a glass to the memory of the late, great Isao Takahata, who passed away earlier this year. And just lap up his masterpiece of a woman finding and creating her place in the world. It’s a bouquet of subtlety and slow-burn romance.

RELATED: ONLY YESTERDAY (1991): A COMING-OF-AGE AND COMING-TO-TERMS GEM OF SUBTLETY AND INTROSPECTION

Dessert: Kiki’s Delivery Service (1989 – 103 minutes) – Hayao Miyazaki’s buoyant tale of the little witch, who must find her confidence, can only ever inspire and uplift. Its hopeful, optimistic message is a perfect way to enter a new year.

16. Hitchcock in the House

Hankering for an evening of suspenseful lazing on the couch – with edge-of-your-seat moments? Binge on some classic Alfred Hitchcock.

Dessert: Rear Window (1954 – 112 minutes) – Lick your lips to this dark tale of the lame man who spots murder across the lane and the lengths he goes to investigate. Starring James Stewart and Grace Kelly.

You can’t really go wrong with basing your movie meal on Audrey Hepburn classics. They have no best before date. Timeless, truly timeless.

Starter: Roman Holiday (1953 – 118 minutes) – Whet your appetite with this black-and-white classic of the princess who gets only one day to let loose and fall in love, before restrictive royal duties return. It’s a bittersweet treat, co-starring Gregory Peck.

Main: Breakfast at Tiffany’s (1961 – 114 minutes) – Get your fill on this wild tale of the flighty girl with her plans for life and love, and the man who challenges them. Oh, it’s not a classic for no reason. Co-starring George Peppard.

18. Peckish for the Paranormal

Feeling a bit peckish for paranormal romance, for love outside the everyday parameters? Well, get crackin’ and snackin’ on these!

Starter: Age of Adaline (2015 – 113 minutes) – Start with the timeless tale of the ageless beauty, who’s been hiding from life and love for far too long. Starring Blake Lively and Michiel Huisman.

Main: Sliding Doors (1998 – 99 minutes) – Crunch into this tale of consequences, of trains missed and trains caught, and the aftereffects of life’s many coincidences. Starring Gwyneth Paltrow and John Hannah.

Dessert: Dramaworld (2016 – 141 minutes) – Relax and enjoy this zany tale of the K-drama fangirl who ends up stuck in her favorite K-drama. It’s a real treat! Starring Liv Hewson and Sean Dulake.

Celebrate the coming new year of 2019 with films from previous decades ending with 9s.

Starter: The Mummy (1999 – 125 minutes) – Action, adventure and romance in the tombs of Egypt? Give me a helping of that, please. Starring Brendan Fraser and Rachel Weisz.

Main: North by Northwest (1959 – 136 minutes) – Gorge yourself on what is often considered one of the greatest films of all time. It’s a Hitchcock classic of suspense, mystery, pursuit, mistaken identity. Starring Cary Grant and Eva Marie Saint.

Do you have a film menu to add to this list? Let us know in the comments.