On November 1, 2018, National Novel Writing Month (NaNoWriMo) kicked off. For the next month, aspiring writers will disappear into their imaginations. They will feverishly pour words into books, hoping to be the next best-selling success story from NaNoWriMo. The community of NaNoWriMo rallies behind its participants. Pep talks, self-care reminders, and drills help writers with bursts of creativity. Moreover, the caring support inspires writers to reach deep down and find the words to captivate readers.

While you may not have heard of NaNoWriMo. chances are, you’re already a fan of one, two, or more of books written during the month-long event. Below, are six amazing reads originally written during a NaNoWriMo. Fantasy, young adult, historical romance, and fiction, these books are fantastic reads that will captivate your imagination! If you are a NaNoWriMo participant, we hope this list inspires you to keep writing and to never stop dreaming! 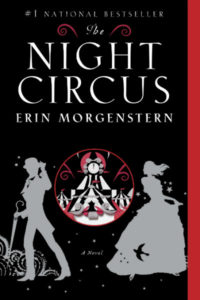 The circus arrives without warning. No announcements precede it. It is simply there, when yesterday it was not. Within the black-and-white striped canvas tents is an utterly unique experience full of breathtaking amazements. It is called Le Cirque des Rêves, and it is only open at night.

But behind the scenes, a fierce competition is underway—a duel between two young magicians, Celia and Marco, who have been trained since childhood expressly for this purpose by their mercurial instructors. Unbeknownst to them, this is a game in which only one can be left standing, and the circus is but the stage for a remarkable battle of imagination and will. Despite themselves, however, Celia and Marco tumble headfirst into love—a deep, magical love that makes the lights flicker and the room grow warm whenever they so much as brush hands.

True love or not, the game must play out, and the fates of everyone involved, from the cast of extraordinary circus per­formers to the patrons, hang in the balance, suspended as precariously as the daring acrobats overhead.

Published in September 2011, The Night Circus was Erin Morgenstern’s debut novel. She wrote it over the course of several years of NaNoWriMo, starting in 2005. This NaNoWriMo novel is a 2012 Alex Award Winner, a 2011 School Library Journal Adult Books for Young Adults winner, and a 2014 YALSA Best Books for Young Adults winner. On top of that, it spent seven weeks on the New York Times Bestsellers List and received starred reviews from Publishers Weekly and Kirkus Reviews. 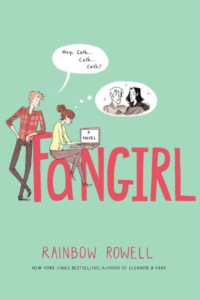 Cath is a Simon Snow fan. Okay, everybody is a Simon Snow fan, but for Cath it’s something more. Fandom is life. It’s what got her and her sister, Wren, through losing their mom. It’s what kept them close. And now that she’s starting college, introverted Cath isn’t sure what’s supposed to get her through. She’s got a surly roommate with a charming, always-around boyfriend, a fiction-writing professor who thinks fanfiction is the end of the civilized world, a handsome classmate who only wants to talk about words . . . And she can’t stop worrying about her dad, who’s loving and fragile and has never really been alone.

For Cath, the question is: Can she do this? Can she make it without Wren holding her hand? Is she ready to start living her own life? Writing her own stories? And does she even want to move on if it means leaving Simon Snow behind?

Rainbow Rowell already published two books when she participated in her first NaNoWriMo. A NaNoWriMo skeptic, she threw herself into the process and voila! Fangirl! Published in September 2013, Fangirl spent two weeks in the top ten of the New York Times Bestseller List. But, Fangirl returned again and again to the New York Times Bestseller List. Even better, it featured on the list along with two other novels by Rowell. Fangirl also received starred reviews from Booklist, Kirkus Reviews, Publishers Weekly, and the School Library Journal. 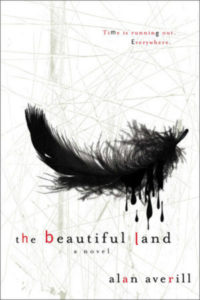 Takahiro O’Leary has a very special job working for the Axon Corporation as an explorer of parallel timelines—as many and as varied as anyone could imagine. A great gig—until information he brought back gave Axon the means to maximize profits by changing the past, present, and future of this world.

If Axon succeeds, Tak will lose Samira Moheb, the woman he has loved since high school—because her future will cease to exist. A veteran of the Iraq War suffering from post-traumatic stress disorder, Samira can barely function in her everyday life, much less deal with Tak’s ravings of multiple realities. The only way to save her is for Tak to use the time travel device he “borrowed” to transport them both to an alternate timeline.

But what neither Tak nor Axon knows is that the actual inventor of the device is searching for a timeline called the Beautiful Land—and he intends to destroy every other possible present and future to find it. The switch is thrown, and reality begins to warp—horribly. And Tak realizes that to save Sam, he must save the entire world…

Author Alan Averill jumped into NaNoWriMo after hearing his friends talk about the month-long writing event. As a result, he wrote 60% of his novel during NaNoWriMo. Averill credits the process for keeping him moving forward. The Beautiful Land hit shelves in July 2013. It was also an Amazon’s Breakthrough Novel Award winner. While it received mixed reviews from critics, it is clearly a fan favorite on Amazon and Goodreads. Just check out the comments here and here! 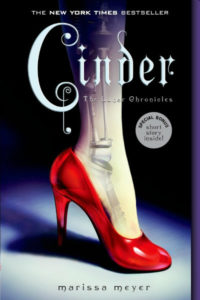 Humans and androids crowd the raucous streets of New Beijing. A deadly plague ravages the population. From space, a ruthless lunar people watch, waiting to make their move. No one knows that Earth’s fate hinges on one girl. . . .

Cinder, a gifted mechanic, is a cyborg. She’s a second-class citizen with a mysterious past, reviled by her stepmother and blamed for her stepsister’s illness. But when her life becomes intertwined with the handsome Prince Kai’s, she suddenly finds herself at the center of an intergalactic struggle, and a forbidden attraction. Caught between duty and freedom, loyalty and betrayal, she must uncover secrets about her past in order to protect her world’s future.

Marissa Meyer’s re-imagination of Cinderella began during the 2008 NaNoWriMo. Not only did Meyer’s write Cinder, but also the second and third novels in The Lunar Chronicles series, Scarlet and Cress. The entire series spent weeks at the top of the New York Times and USA Today bestseller lists. In addition, Cinder (as did the rest of the series) won numerous awards and received a starred review from Publishers Weekly. Oh, and did you know that Meyer’s use to write Sailor Moon fanfiction??? 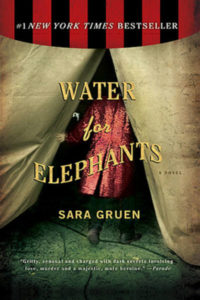 As a young man, Jacob Jankowski fate put him on a rickety train home to the Benzini Brothers Most Spectacular Show on Earth. It was the early part of the Great Depression, and for Jacob, now ninety (or ninety-three, he’s not quite sure), the circus world he remembers was both his salvation and a living hell. A veterinary student just shy of a degree, he is put in charge of caring for the circus menagerie.

It was there that he met Marlena, the beautiful equestrian star married to August, the charismatic but twisted animal trainer. And he met Rosie, an untrainable elephant who was the great gray hope for this third-rate traveling show. The bond that grew among this unlikely trio was one of love and trust. Ultimately, it was their only hope for survival.

Sara Gruen found great success after writing Water for Elephants during NaNoWriMo. Water for Elephants was #1 best seller on New York Times Bestsellers List. In addition, it topped the lists of Publishers Weekly, the San Francisco Chronicle, and The Washington Post. It continues to appear on bestseller lists. Furthermore, in case you missed it, it’s also a movie starring Reese Witherspoon. And, it is now on its way to Broadway! 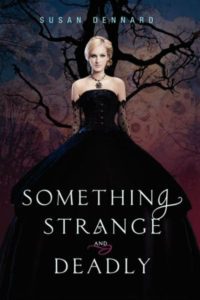 Sixteen-year-old Eleanor Fitt’s brother is missing. When she discovers the Dead are rising in Philadelphia and wreaking havoc throughout the city, she knows her brother is involved.

So Eleanor enlists the help of the Spirit-Hunters. This motley crew, hired to protect the city from supernatural forces, is after the necromancer who has been reanimating corpses. Their skills can save her brother. But as Eleanor spends time with the Spirit-Hunters, and their handsome inventor, Daniel, the situation becomes dire. Now not only is her reputation at risk, but her very life may hang in the balance.

Fans of historical fiction will LOVE Something Strange and Deadly by the author of the Witchland series. Written during the 2009 NaNoWriMo, this book will captivate you! Dennard also wrote the second and third novels of the series, A Darkness Strange and Lovely and Strange and Ever After, during NaNoWriMo. The series received positive reviews from fellow authors as well as Kirkus Reviews, Publishers Weekly, School Library Journal, and VOYA. Oh, and let’s not forget that gorgeous cover!

These six novels are just a few out of the hundreds of books from NaNoWriMo. As purveyors of romantic and Romantic reads, we wish all of this year’s NaNoWriMo participants the best of luck! We look forward to reading your books!

Have you read these NaNoWriMo books? Are you a NaNoWriMo writer? Chime in below!